Check out this for an insane build. Built by LoveFab in the US, this special Honda NSX rally car will compete in this year’s Pike Peak International Hill Climb, scheduled for August 12. 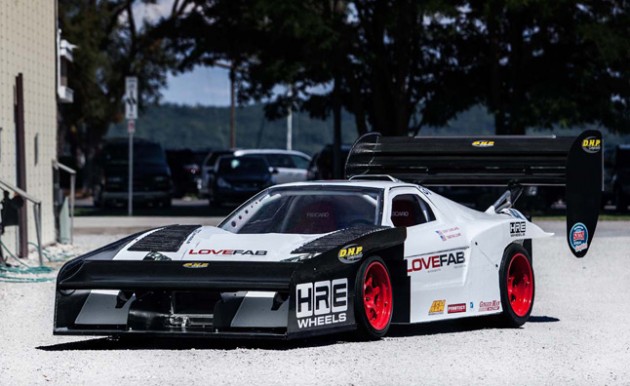 With an extensive and impressive range of aero enhancements, and a full tubular chassis, this Honda NSX is a purpose-built hill climbing machine. It has two huge front wings providing extra downforce on the front axle, and a wickedly massive rear wing to keep the driven wheels planted. The aero parts provide an overall downforce of 2722kg.

As for power, the LoveFab Honda NSX Pikes Peak special features a 1000hp (746kW) turbocharged dry-sump engine package. However, for the hill climb event power will be turned down to a ‘modest’ 850hp (634kW). This enables the crazy creation to have a top speed of around 275km/h, even with the added downforce.

Most of the body is made from carbon fibre resulting in an overall weight of just 998kg. The power-to-weight ratio of 1.57kg/1kW is enough to scare the living daylights out of a racing superbike.

To ensure most of the power is put down to the ground, the LoveFab Honda NSX rolls on 295mm front tyres and 335mm rear tyres. As you can see in the videos below, these aren’t enough to harness in all that power.

(The car is running at a tune of 500hp at the wheels in the video, according to the description.)

The 2012 Pikes Peak International Hill Climb has been rescheduled due to the Colorado fires, and will now take place on August 12.