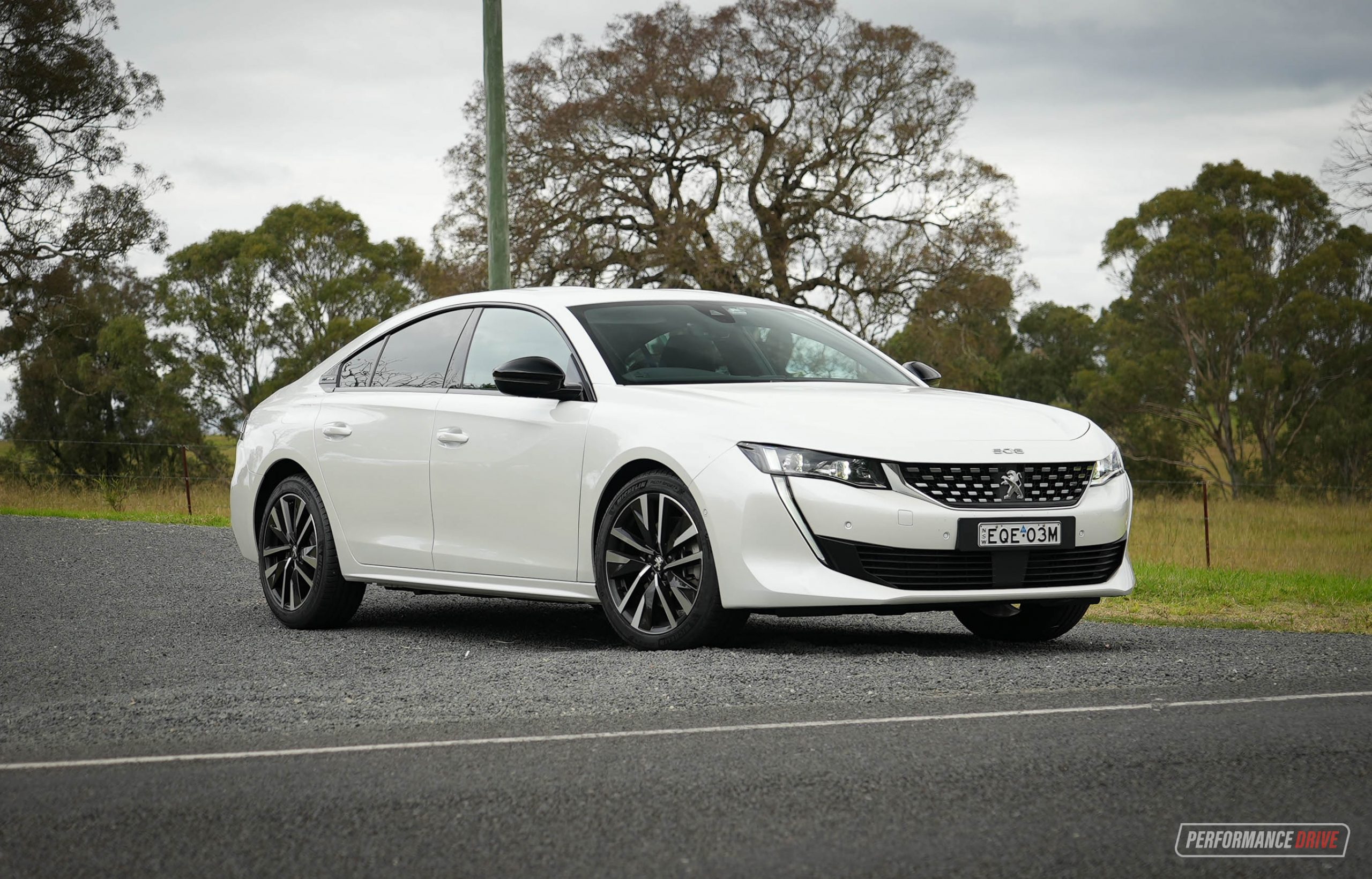 The 2022 Peugeot 508 GT is already a sleek bit of gear, and quiet desirable in the shrinking world of executive fastback/sedans. Now, Peugeot offers a plug-in hybrid (PHEV) version which should draw in more buyers while securing the sedan’s future. 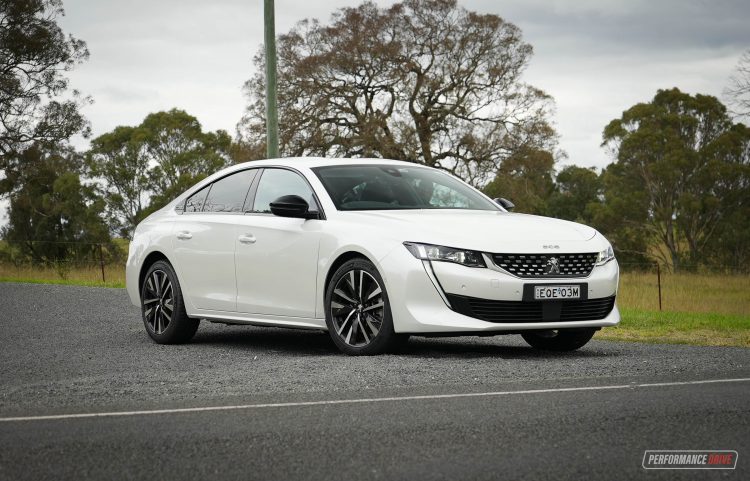 Peugeot Australia recently introduced two all-new PHEV models, based on the flagship 3008 GT Sport SUV and the 508 GT Fastback. However, the powertrains are not exactly the same. This 508 gets a 133kW 1.6-litre turbo-petrol four-cylinder and a single electric motor, both powering the front wheels. Meanwhile the 3008 PHEV gets two electric motors – an extra motor powering the rear axle – and a more powerful version of this 1.6 turbo producing 147kW.

Combined, the system here develops 165kW and 360Nm, but an impressive 222kW and 520Nm in the 3008 PHEV At first we couldn’t stop complaining (to ourselves), wondering why the 222kW setup wasn’t slipped into this suave sedan? After all, they both share the same EMP2 platform. We eventually calmed down a bit and realised the FWD system here is actually better suited, as it keeps the weight down and helps to maintain the 508’s good underlying driving dynamics. 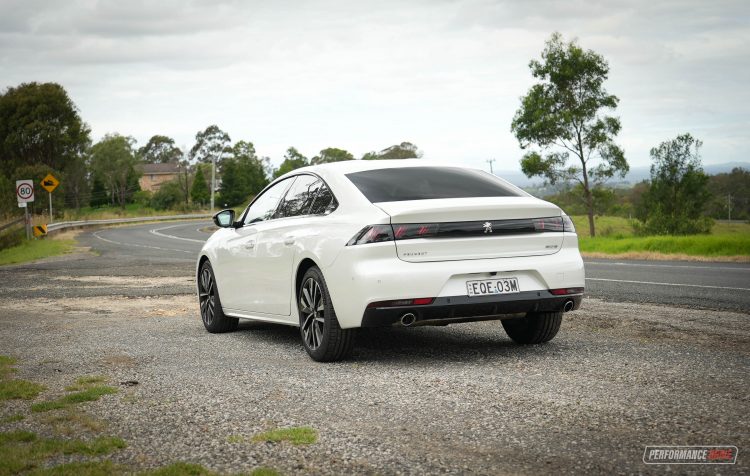 It looks the same as the regular version, in that, it is breathtaking, especially for this class. And being the GT trim line means you get colour-coded trimmings and gloss black highlights. It’s a neat package, and it proves SUVs needn’t always be the go-to option, even if you are looking for something trendy and suave.

We love the clean body lines and subtle attention to detail, too. For example, check out the darkened panel across the back, which lights up with those trademark claw-style LED taillights. It looks really cool at night. The front end also has a pouncing stance, with a sophisticated grille and intricate LED headlights portraying an exclusive and interesting presence. 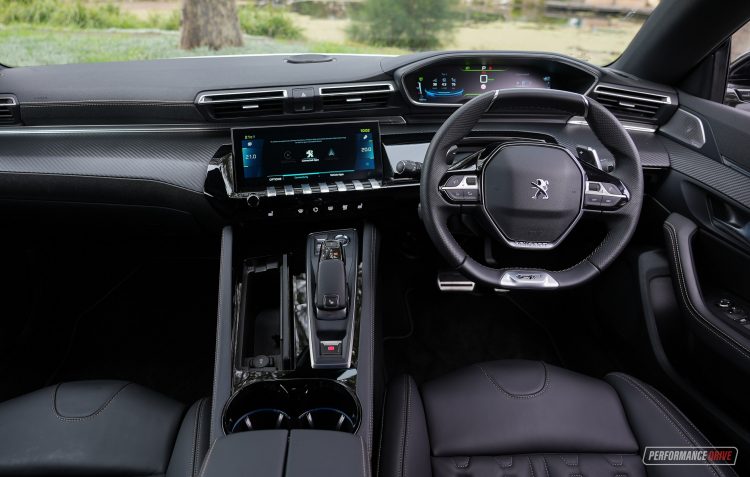 Inside is just as stunning. Pretty much all materials used in here are either soft-touch or at least feel high quality. And the layout really inspires imagination. The 10-inch touch-screen is rather average in terms of menu functionality, but it does come with Android Auto and Apple CarPlay. And there is a premium 10-speaker Focal sound system and sub-woofer as standard.

The mood lighting, which is configurable and even extends to the cup holders in the front, really sets this car above the rivals we think; it is very much like a proper premium vehicle in here. There’s even massage seats in the front (including passenger) as standard, with various modes to select from to sooth your drive. 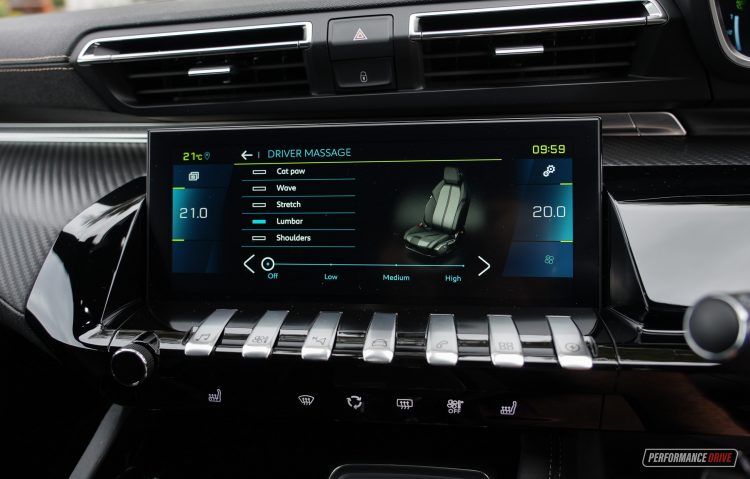 Rear seat passengers get climate vents and charging ports, and a decent amount of legroom. Headroom is a bit more confirmed compared with an SUV, mainly due to the low-arching roofline. But it’s acceptable once you’re in. The same high-quality materials are carried through to the back as well, including Nappa leather and Aikinite double-stitching.

In the back you have a good size boot, and the fastback hatch lid means it is easy to load in bulky items. There is a small storage cavity under the floor but it’s not quite big enough for the charging cable bag, oddly. 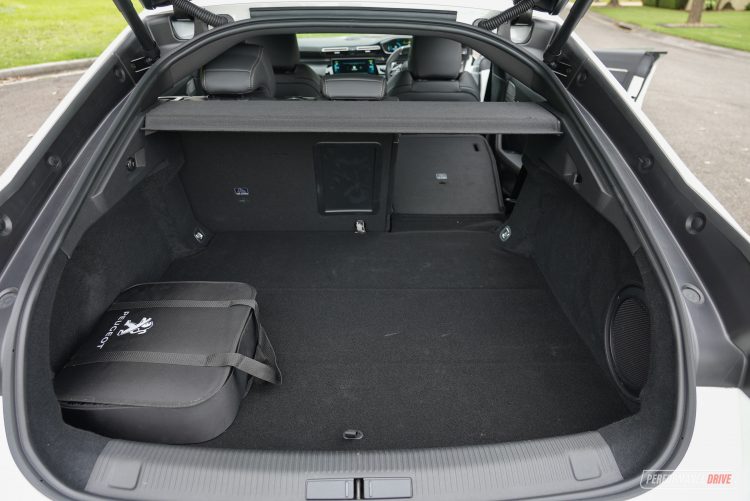 Similarly, we find it strange the glovebox is not big enough to hold the vehicle manual booklet (the lid doesn’t close). Or perhaps the creators of the booklet were not passed on the dimensions of the glovebox? Either way, it seems silly to have the booklet floating around the cabin. 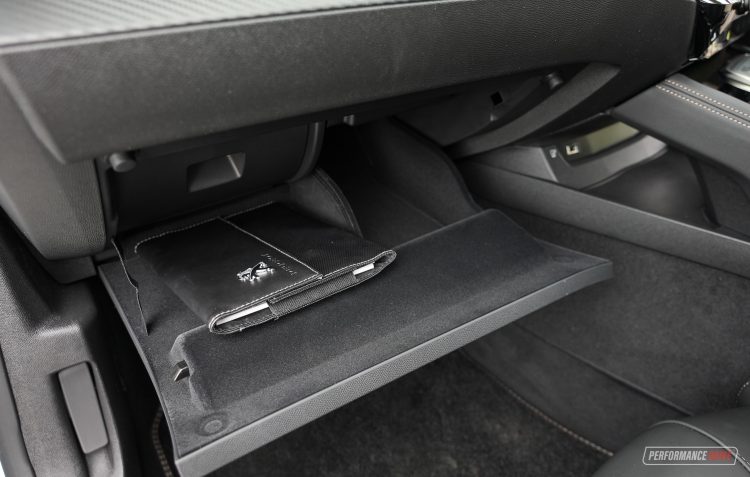 Unlike the regular GT, the PHEV comes with unique 18-inch alloy wheels instead of the larger 19s. They’re wrapped in grippy Michelin Pilot Sport 4 tyres nonetheless, measuring 235/45 all round. These are very grippy tyres. You can really push hard in the corners if you want to and the car sticks like glue. This not only provides a level of excitement, but also loads of reassurance in terms of a very secure and safe holding on the road.

It steers smoothly around town too, and thanks to that awkwardly small steering wheel (that blocks the view of the speed display) it is very easy to park and move about in tight environments. There’s also a surround-view parking camera system to help guide you around.

What we love most about the drive experience though is its sheer adaptability and versatility. It cruises like a stately sedan on the highway, at low revs, offering a stable but absorbent ride, yet it’s always ready to dance when there’s a twisty mountain road ahead. Likewise, it is very happy to stroll about in the city where you can switch to electric mode and use no fuel at all. 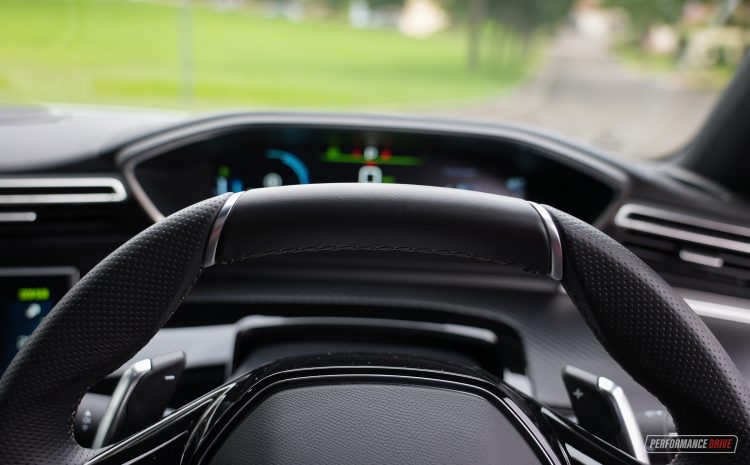 As for the powertrain, the combined output is 165kW, which is the same as the regular 1.6T GT as mentioned. But in this you get full electric driving capability through an 81kW electric motor that can power the front axle exclusively. The 1.6 turbo develops 133kW in this application but it is turned up to 147kW in the 3008 Hybrid.

At first you might think it would have been nice if Peugeot applied the same engine tune here. However, we think that would see the front wheels managing near-200kW, likely upsetting the well-balanced nature of the car.

Impressively, Peugeot has managed to keep weight to a minimum, despite the heavy hybrid gear, applying things like a 43L fuel tank instead of the standard 62L unit. This has a tare weight of 1695kg (310kg heavier than the regular 508 GT Fastback), which is quite light for a plug-in hybrid vehicle.

According to our performance tests this can do 0-100km/h in a respectable 7.85 seconds, while the last time we tested the regular GT it achieved the sprint in 8.27 seconds. We suspect the difference is down to extra torque in the hybrid (60Nm more). 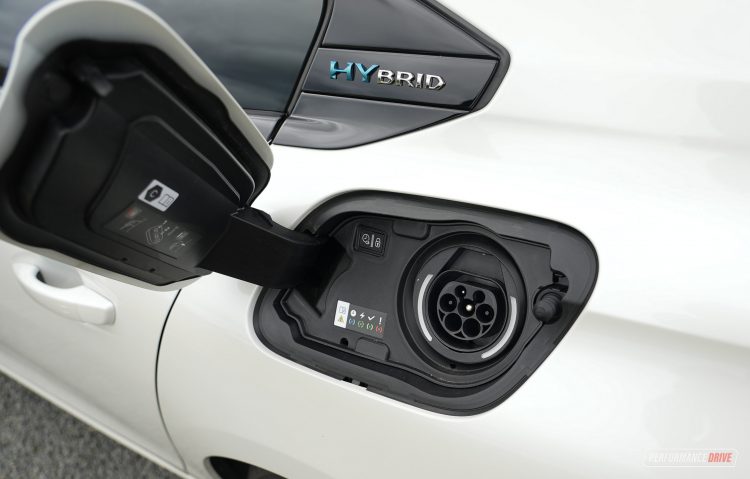 Getting back to that original cost analysis, with this hybrid version retailing from $20,000 more than the regular 1.6T GT, we wonder how long that would take to pay itself off? Well, based on the official consumption averages (which are not exactly realistic), and a petrol price of say, $1.80/litre, and an average yearly distance driven of 15,000km per year, we can figure it out. This would use about $486 in fuel per year, whereas the petrol model would use around $1701 per year.

That means every year the hybrid could save you about $1215. So, in about 16.5 years, the benefits of that initial $20,000 premium would start to pay off. Using these on-paper numbers anyway. Hmm…

In the real world we saw as low as 4.3L/100km during our test with this hybrid, but that was only achieved while the battery still had charge. After the range dropped to zero, while continuing to drive, the trip computer showed a consumption rate of 7.2L/100km. 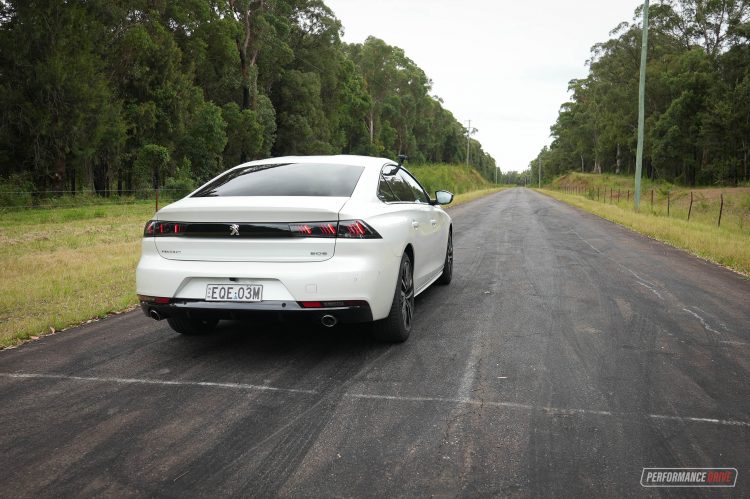 During our performance testing we had to deplete the battery to 0km range as we wanted to see how the car would perform in hybrid mode with the battery level at zero. It did 0-100km/h in 8.06 seconds – a bit slower than the initial 7.85-second run we did with the battery near full. We also recorded 0-100km/h in 13.21 seconds in full electric mode.

In order to carry out this test however we drove the car applying harsh throttle up and down the private road purely to deplete the battery. Surprisingly, it required about 4 runs up and down before the battery dropped from 35km range to 0km. And the strip is only about 1km long, with some runoff. Although it was driven under harsh conditions in this instance we found the range figure doesn’t last that long, even when driven normally in the suburbs. 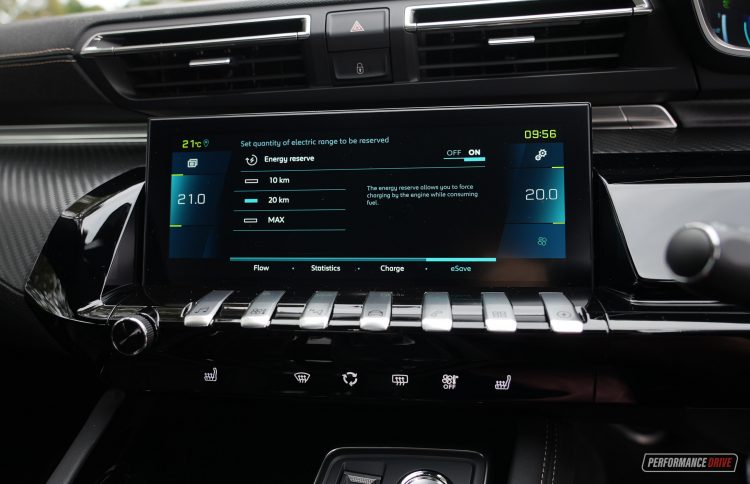 You can charge the car at some public stations, with a Type 2 socket, or use the on-board cable and plug it into a conventional home socket. Since the battery is only 11.8kWh in capacity, it doesn’t take that long to recharge compared with a full electric vehicle. The vehicle automatically caps recharging power at 3.7kW.

Using a 2.3kW plug, Peugeot says you can take the battery from 0-100 per cent in about five hours. There’s also an ‘eSave’ mode within the touch-screen menu that allows you to force the petrol engine to recharge the battery. We did this and it required about an hour of driving before the range approached maximum. Mind you the fuel consumption did spike during this time. We’re not sure where this function would come in handy. However, it was good for us as we could carry out performance testing with a full battery. 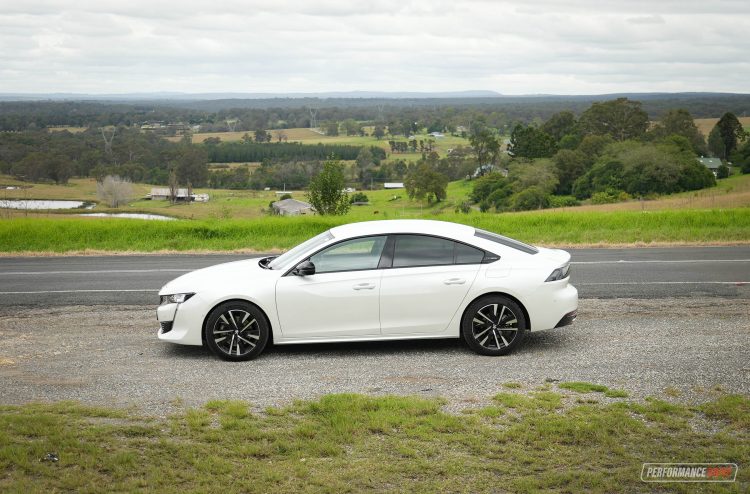 We understand electric systems, such as battery technology and electric motors, cost a lot of money to produce and develop. Especially batteries at this stage of the industry’s EV progress. However, $20,000 seems like a lot more to pay over an almost identical petrol model. Especially when, on paper, the powertrain performance is only marginally improved while offering a small electric range figure.

However, we do admire the 508 GT Fastback’s design and the PHEV’s innovation and speed at which it has been able to reach Australian shores. If you already adore the 508 GT then yes, this is worth a look. Especially if you live in a built-up area and mostly travel short distances, because you’ll benefit most from the electric driving capability.

However, if you love the idea of an electric vehicle you might be more interested in some of the tempting new models popping up in the EV space. And some are priced south of this.