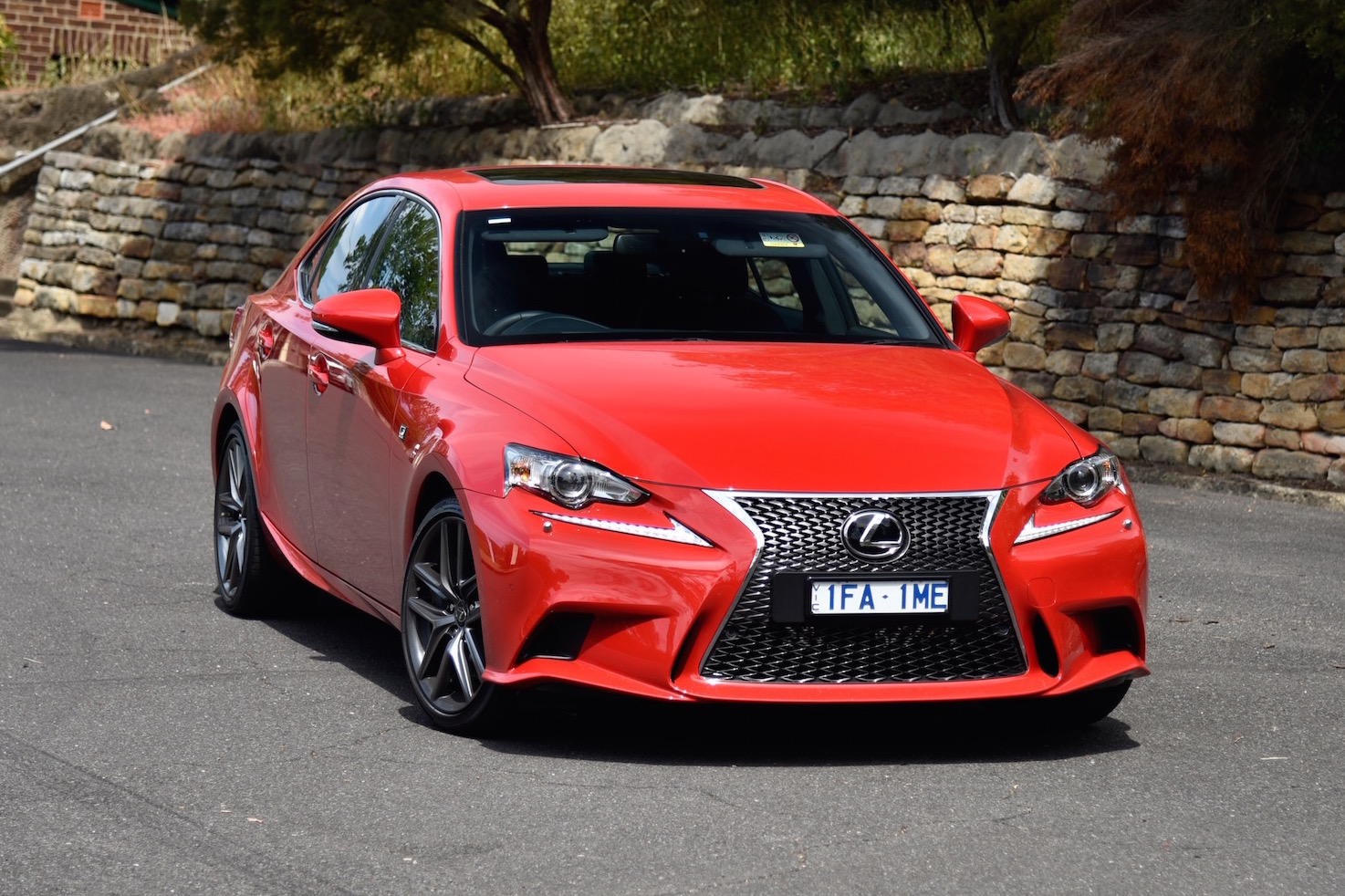 Ever since Lexus introduced its new 2.0-litre turbocharged petrol engine in the NX last year, the PD team immediately longed for the engine to be included in the Lexus IS sedan – the sportiest sedan in the showroom. And now here it is. Does the Lexus IS 200t live up to our expectations? We’re putting the F Sport version to the test to find out. 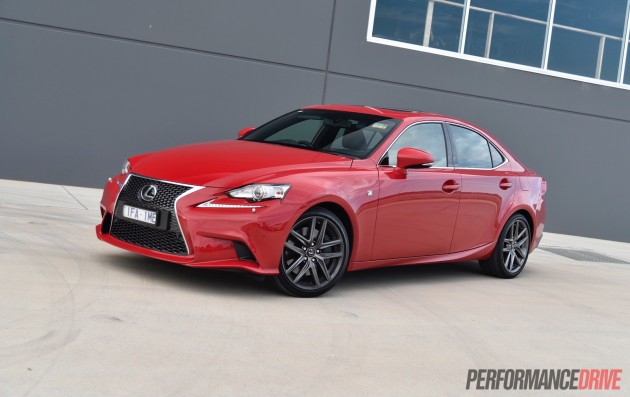 The IS 200t replaces the IS 250 and its thirsty 2.5-litre naturally aspirated V6. This is a very good thing in our view as the V6 was a smooth and peaky unit but it wasn’t able to deliver everyday performance like the competitors, with average low-end torque and in-gear pick-up, and poor economy, comparatively.

In saying that the IS 200t is still one of the least fuel-efficient specifically in terms of entry-level variants, offering an average fuel consumption of 7.5L/100km. For those wanting sheer economy Lexus does offer the slightly more expensive (around $2500 more) IS 300h hybrid which uses just 4.9L/100km on the same combined cycle test.

Prices for the IS 200t start at $57,500 for the base model Luxury, $65,500 for this F Sport, and top out at $76,500 for the Sports Luxury (all excluding on-road costs). All come with the same engine and an eight-speed automatic transmission with rear-wheel drive. 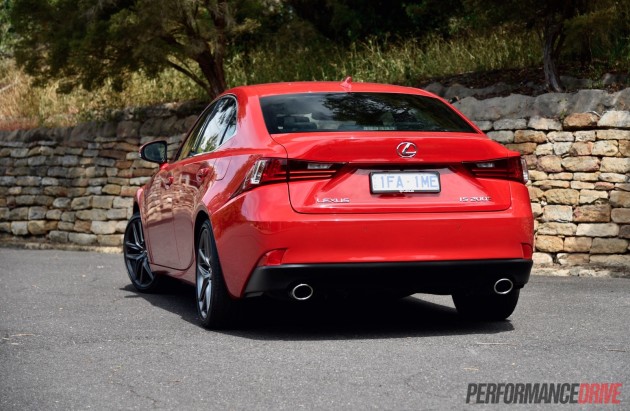 The IS 200t coincides with the MY15-MY16 update for the IS range, which adds stop-start technology, a revised front grille with a darker grey insert, and bi-xenon HID headlights with LED daytime running lights. Some new exterior colours have also been added to the package; Caliente, Sonic Quartz and Cobalt Mica.

Aside from this, the primary addition to the range is the new 2.0-litre turbo. This means the same striking design is carried over. We still think the IS is one of the better-looking sedans in the class. Sure, that grille is a bit… thought-provoking, but the rest of it offers a modern and consistent arrangement of unique Japanese design cues, with some muscular themes. From the rear in particular we think it presents a purposeful, road-hugging attitude, especially with the F Sport bodykit.

Inside, the IS cabin is one of the tightest in the segment. For average to smaller individuals this won’t be a problem. But if you’re quite tall (or wide) you will find some of the rivals more comfortable. On the plus side the tight cabin does mean it is one of the more engaging and driver-focused settings in the class. The dash is skewed toward the driver and the very high centre console makes you feel cocooned in, like you’re strapped into a supercar. Going for the F Sport brings exclusive sports seats too, sitting you deeper down in the car.

Speaking of the F Sport trim, this is Lexus’s way of offering personalisation options. There aren’t an infinite number of expensive tick boxes to choose from, like in most rivals. Instead, Lexus simply offers three main trim levels – the F Sport is in the middle. In fact the only options are premium paint ($1500), and two “Enhancement Packs” which add a 15-speaker stereo, and the stereo with lane departure warning and auto high-beam technology ($4000 and $6000, respectively).

This doesn’t meant the IS 200t F Sport isn’t well equipped. It comes with loads of bonus features and luxury appointments as is. Some of these include a power adjustable steering column, digital radio, power front seats with heating and cooling functions, sat-nav, and adaptive cruise control. Those familiar with this segment will notice most of these features are usually a costly option. But not here. It’s all standard fitment. In this sense, we think the sheer value factor makes the IS 200t a very attractive proposition in this tough segment. 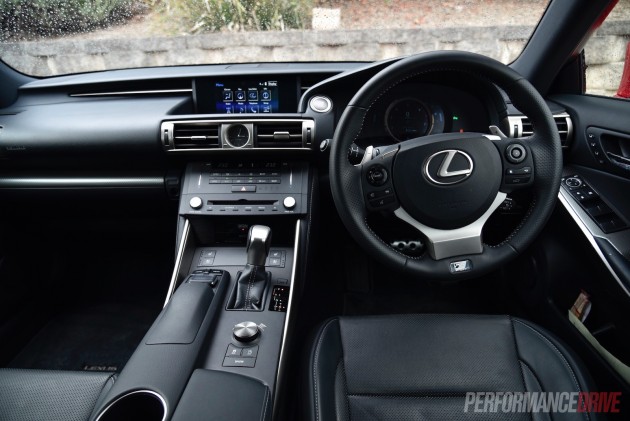 So, we’ve already established in numerous test drives of other variants that the IS sedan is a brilliantly set up rear-wheel drive sports sedan. Is the 2.0T a match made in heaven? Yes and no. Let us explain.

Replacing the IS 250 V6 comes with huge benefits in terms of fuel economy. We averaged around 10L/100km during our week, but we were ‘enjoying’ it more than the average motorist would on an everyday basis. You can expect to see around 8.5L/100km under regular conditions and demands.

Power delivery is where things don’t seem to be as impressive as they ought to be. We get it, this isn’t designed to act like a VW Golf GTI, spitting and popping between gear changes, and burbling its way around town. However, 180kW from a 2.0-litre engine is a great achievement, and in this case Lexus isn’t making a big deal about it – like many of the 2.0-litre turbo engines that are out at the moment.

For luxury car buyers who just want a pleasant and quiet machine to drive to work, this is ideal and probably the exact buyer type engineers were focusing on in developing the IS 200t. For sporty drivers and such, the engine is too smooth and you really need to push that accelerator pedal right to the floor to see evidence of that 180kW. There seems to be some minor turbo-lag too, although, we can’t tell if it’s turbo-lag or transmission lag – perhaps purposely calibrated into the transmission for smoother take-offs?

Fortunately, Lexus does present the driver with four drive modes in the F Sport, including a tantilising Sport Plus mode. This sharpens up throttle response, turns the transmission into an aggressive, ready-to-go unit that holds off on auto upchanging, and tightens the electric steering. In this mode you can really enjoy yourself on a nice road. More so if you use the paddle shifters. The actual gear changes, specifically, are quicker than a click of the fingers, both up and down. 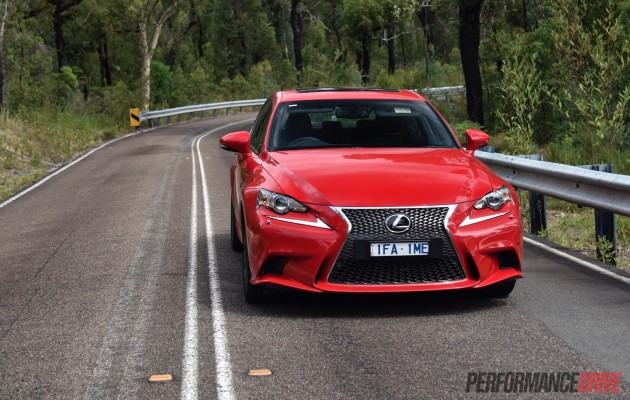 Steering. What a setup. Lexus has done a fine job with the IS. It’s engaging, with all feedback coming right through to your hands, and it is extremely precise. We’ve always loved the IS F V8 sports car, partly because of the Yamaha-engineered V8 and partly because of the awesome handling and steering. Driving the IS 200t, you get the sense it can handle a lot more power. The IS 200t remains extremely stable and committed at all times, whether you’re tackling high-speed sweepers or threading intricately down a mountain pass. The staggered wheel and tyre size helps, although, we’re not a fan of the hard-compound, touring-oriented Bridgestone Turanzas Lexus has opted for.

As for outright performance? Lexus has made some revisions to the 2.0L engine exclusively for the IS, giving it a unique exhaust system and engine computer tune. This results in 5kW above other ‘200t’ Lexus models. Even so, we timed 0-100km/h in 7.61 seconds – we tried many different methods but we couldn’t match Lexus’s 7.0-second claim. This is the same time we achieved in the IS 250 back in 2013. The IS 250 produced 153kW and 252Nm, and weighed 35kg less than this model (in F Sport guise, tare weight). We can’t explain why the IS 200t isn’t quicker than the IS 250. Maybe it was a weather difference?

Where the 200t shines brighter than the IS 250 is with overall cross country breadth, with maximum torque available from just 1600rpm and up to 4000rpm. This means you don’t have to work the engine anywhere near as hard as the old V6 to get to where you need to go. And if you throw some hills into the equation and a few human beings into the cabin, the 200t is noticeably more practical and useable.

Our expectations were high for this one, but only because the IS is such a great little drive. In 200t form it isn’t as quick as you might expect. However, as a replacement for the thirsty IS 250, which is a luxurious mid-size sedan with sporty undertones, the IS 200t is the perfect evolution and one of our favourite mid-size premium sedans.

CONS:
– Cabin will be tight for some
– Strange power delivery; some turbo/transmission-lag
– Not quicker than old IS 250, despite extra power (better overall performance and torque)