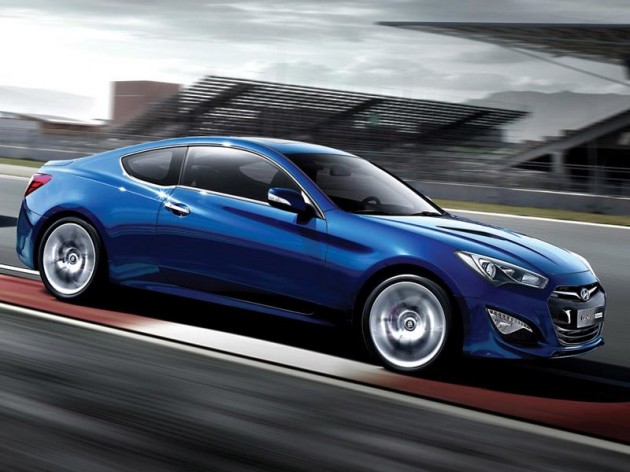 Hyundai decided to reveal some early preview details of the new 2013 Hyundai Genesis Coupe at the Korea Speed Festival 2011 in Yeongam, Korea, over the weekend.

Thanks to Hyundai’s Gasoline Direct Injection technology (GDI), the Lambda 3.8-litre V6 petrol engine will develop 261kW (350hp) of power and 400Nm of torque. This is a decent whack higher than the previously suspected 248kW.

One would expect this new Genesis Coupe to achieve very similar acceleration, also in rear-wheel drive fashinon. On top of this, Hyundai is really looking to connect with its drivers and has come up with technologies to improve the sound of the engine. Hyundai said at the event,

“In order to raise the emotional quality in the Lambda 3.8 GDi model, a sound generator is applied to replace the rough engine sound with a classy and sporty sound.”

If the V6 isn’t your thing, Hyundai has also revealed some details on the entry-level engine, one of which will be pretty desirable itself. It will feature a 2.0-litre turbocharged (twin-scroll) four-cylinder engine producing 205kW (275hp) of power and 372Nm of torque. It’s likely this version will also come with a very respectable fuel consumption rating.

Both variants will come with a six-speed manual transmission, and a new eight-speed automatic unit providing quick acceleration and fuel-saving cruising speeds.

It seems like the 2013 Hyundai Genesis Coupe will be a very interesting package, one that could potentially be quite competitive, especially if the price is right when it arrives in Australia within the next two years. What do you think?