Chevrolet has unveiled a new 2013 Chevrolet Corvette 427 Convertible Collector Edition and 60th Anniversary Package to pay tribute to the classic icon. The 427 will go up for auction at the Barrett Jackson event on January 21. 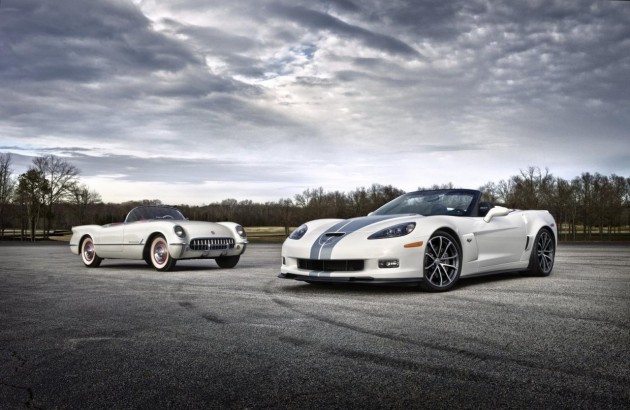 Chevrolet is calling the 2013 Chevrolet Corvette 427 Convertible Collector Edition the most powerful convertible Corvette in history. It features a stonking 7.0-litre (427ci) LS7 V8 engine under the bonnet, producing 377kW of power and 637Nm of torque.

On top of its impressive power, the special edition also features a number of lightweight revisions to further improve performance, and to give it more exclusivity. Features include carbon fibre floor panels, a carbon fibre bonnet, Corvette Z06 front guards, lightweight Cup alloy wheels, and an optional carbon front splitter.

The Chevrolet Corvette 60th Anniversary Package is slightly more tame, and is more of an optional upgrade than a special one-off. It features a ZR1 rear spoiler, optional racing stripes, a unique blue leather interior, and an Artice White exterior colour scheme. The package will be optional on all 2013 Chevrolet Corvettes.