Toyota Australia has launched the new second-generation 2012 Toyota Aurion. The new model gets a styling overhaul, improved fuel economy, and a lighter and larger platform. 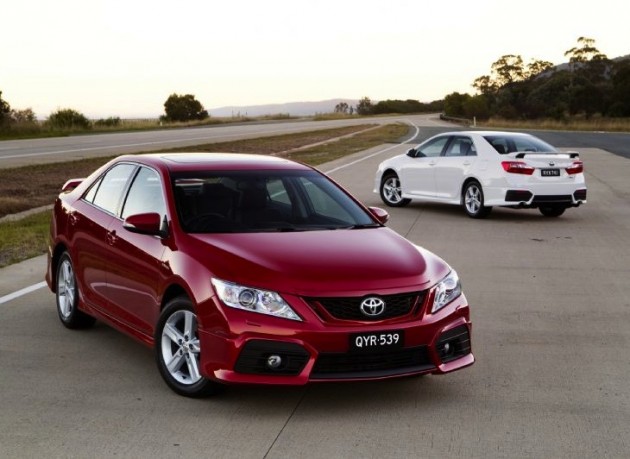 The 2012 Toyota Aurion is available in five trim variants; the AT-X, Prodigy, Presara, Sportivo, and Sportive ZR6. Toyota is emphasising that none of these models exceeds the $50,000 price point, putting them squarely up against the Ford Falcon and Holden Commodore offerings.

Power comes from a slightly revised version of the 3.5-litre V6, producing 200kW of power and 336Nm of torque on 91 octane petrol. Average fuel consumption has been improved from the previous model’s 9.9L/100km rating, to 9.3L/100km.

Fuel economy has been improved partly thanks a slight weight reduction of around 15kg, now tipping the scales at 1525kg. Despite the diet, the new Aurion is marginally larger, with more legroom front and rear, and a focus on increased headroom in the back.

Toyota says the new model will appeal to existing Aurion owners and those who do not see the need to enter the market above the luxury car tax threshold, but who still want distinctive luxury features. Toyota also says quality has been improved over the previous model, with panel gap tolerances improved from 5mm to 3.5mm.

The new model is built in Australia at the Altona plant in Victoria, and comes with four years/75,000km capped price logbook servicing up to the first five service periods.

Pricing for the new model starts from the following (excluding on-road costs):