Motorsport engineering experts at Prodrive are working on a Prodrive MINI Countryman which will offer big revisions and enhancements in visuals and driving performance, as well as handling characteristics over the standard Countryman S. The Prodrive version is expected to output over 200kW. 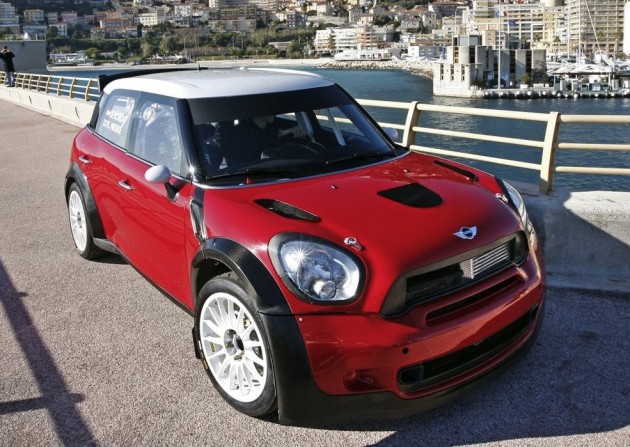 In the world stage of motorsport, MINI is doing well with its MINI Countryman WRC car which debuted late last year. So far this year it has placed third at the Rally of Germany and second, more recently, at the Rally of France. Prodrive, with John Cooper Works, is the team responsible for the car, and now Prodrive is working on a road version.

It doesn’t get much more exciting than this for MINI fans and rally-style road car enthusiasts, as a MINI Countryman WRC car for the road would provide a very worthy competitor to the Mitsubishi Lancer Evolution and Subaru Impreza WRX STI.

According to an Autocar report in the UK, Prodrive has said that development of a Prodrive MINI is certainly possible. Autocar has now confirmed, with images spotting a prototype, that a Prodrive MINI Countryman is on the way. Dave Richards, boss of Prodrive, said,

“Mini obviously has the Cooper and John Cooper Works brands and it will want to work out ways of harnessing this campaign, its rally heritage and those giant-killing acts of the 1960s through its road cars.”

The Prodrive MINI will feature a bespoke exterior and bodykit, including pumped guards front and rear and a carbon fibre rear wing. It’s also expected to get unique alloy wheels hiding a performance brake package, attached to a revised suspension system.

As to what’s under the bonnet is still a bit of a secret at this stage, but sources have said Prodrive is testing various bits and pieces, including a larger turbocharger for the MINI’s 1.6-litre four-cylinder engine, as well as a Prodrive Milltek exhaust system and Superchips engine management.

We can’t wait to see what eventuates from this. Stay tuned for more updates.