The yet-to-be released 2012 Mercedes-Benz C63 AMG Coupe Black Series has been caught in all its glory. It was only a few weeks ago that spy shots of a prototypes were floating around on the net. Here we see a finished example which was recently seen at Circuit Paul Ricard in one of the pit garages. 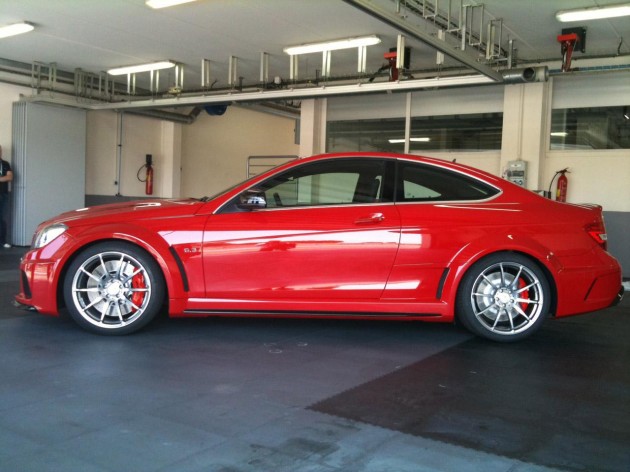 As pressumed, the C63 AMG Coupe Black Series features a chunkier-than-hell bodykit in tune with the previous generation Mercedes-Benz CLK63 Black Edition. Unlike the CLK though, this C Coupe will have rear seats and weight reduction measures have only shaved around 20kg off the car’s weight.

It doesn’t mean it wont be quick. Under the bonnet the Coupe Black Series will feature a 6.2-litre naturally-aspirated V8 churning out 380kW and 640Nm of torque. It will also be fitted with Mercedes-Benz’s seven-speed MCT Speedshift gearbox which should help the car achieve the 0-100km/h dash in around 4.0 seconds.

Also unlike the previous CLK version, this model apparently wont be a limited edition run, it’ll just be part of the AMG lineup. Prices are expected to kick off at around the 100,000 euro mark (around $134,000 before Australia taxes etc.).

Mercedes-Benz Australia is yet to confirm if the model will make its way to Australian showrooms, or at what price. Look out for more updates soon.