This is the new 2012 Lexus RX 450h F Sport. The RX has always been a very popular vehicle in the premium SUV segment, all around the world, but this is the first time Lexus is offering a unique sporty/performance variant; the F Sport. 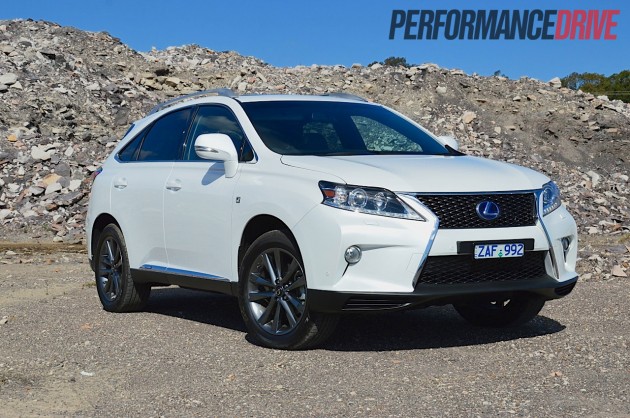 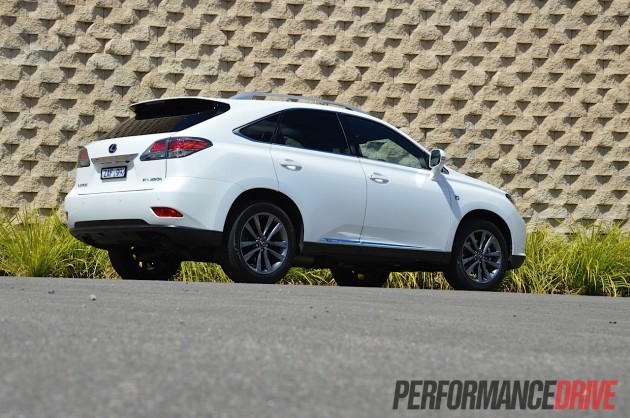 To help boost sales, the 2012 model has been given a thorough makeover. It’s not a complete generation change, but with the introduction of the F Sport variants for the RX 350 and 450h, the SUV now caters for a wider market segment. Three variants are on offer in fact; the Luxury, the F Sport, and the Sports Luxury. The base model RX 270 – an all-new model itself – is only available in a single grade.

Notable highlights and distinguishing features for the 2012 model include a string LED daytime running lights along the bottom of the headlights, the new look Lexus ‘spindle’ front grille design, and slightly revised front and rear bumpers and wheel arches. The interior is also updated, while the steering and suspension has been tuned for a more interactive/enthusiastic driving feel. 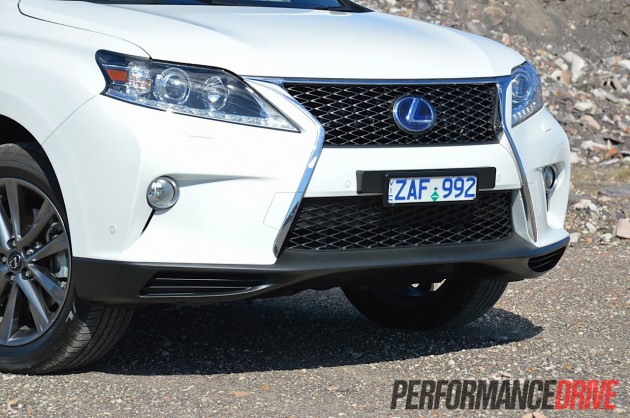 The 450h is the flagship, replacing the old 400h. It also happens to be the company’s most economical SUV. It comes with the new Atkinson cycle hybrid powertrain consisting of a 3.5-litre V6 petrol engine – also seen in the RX 350 and GS 350/450h in a slightly different tune – and two electric motors.

The petrol engine alone produces 183kW of power and 317Nm of torque. One electric motor produces up to 123kW, while the other offers up to 50kW. Overall combined output is rated at 220kW.

Petrol power is sent to the front wheels while one of the two electric motors sends power to the rear wheels under high demands, including full throttle. Rear-wheel power is also engaged when the on-board computers detect slip in the front wheels. 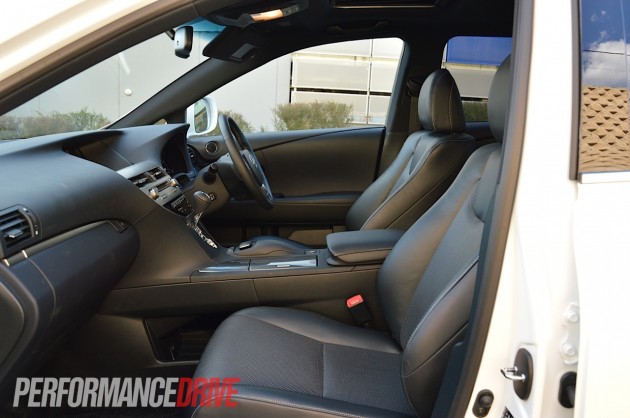 Like all Lexus vehicles, the 2012 RX 450h has a modern and intelligent cabin. The dash is mostly black with stainless steel-type highlights. Most of the controls and in-car settings are operated through the Lexus Remote Touch LCD interface. The touch system uses a kind of mouse pad device which toggles menus right at the rest point of your left hand.

We found the interface to be quite intuitive and easy to use. And once you figure out how to mute the slightly annoying bings and bongs that sound with every menu jump, it becomes a very convenient friend, helping you with everything from traffic conditions with satellite navigation, to your song choice, as well as offering a display to show you how and what power is sent to which wheels in real time. 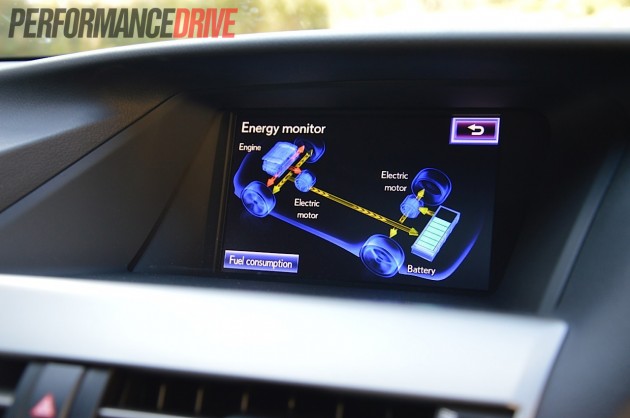 During our test we travelled from Sydney down to Melbourne. At no point were we uncomfortable or even tired, the interior is relaxing and accommodating, and perfect for long journeys like this.

The F Sport-specific seats are moderately bolstered providing adequate lateral support. The best thing is they aren’t too heavily supportive as to ruin comfort. Both the front seats are electronically adjustable with lumber settings and memory functions for the driver as well. 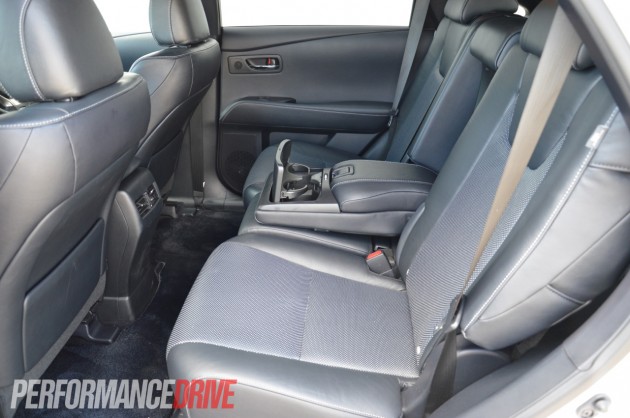 In the back, the rear seats provide ample comfort for two passengers. While the third middle seat is slightly tighter, like in most vehicles, it’s still quite a nice place to be. We found no issues with legroom or headroom in either position.

To further improve long-distance travel for all passengers, there’s a number of air-conditioning vents scattered about the cabin to keep the interior environment fresh and warm or cool. 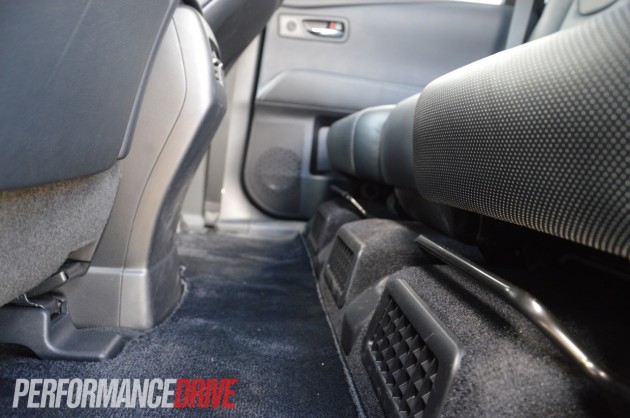 Vision is excellent for front- and rear-seat passengers; a feat that will appeal to the more typical SUV buyer who simply wants a high-riding vehicle. The open vista certainly enhances the feeling of safety and security when behind the wheel.

Being a premium vehicle, the RX 450h is filled with high-end amenities. All buttons and controls also have a sterling and solid feel to them. It gets keyless entry and keyless button start, automatic wipers and headlights, an electric tailgate, an electric adjustable steering column, and that LCD ‘Remote Touch’ interface with satellite navigation. There’s also mood lighting around the cabin, including lights that spray cool beams onto the floor in the front and back. 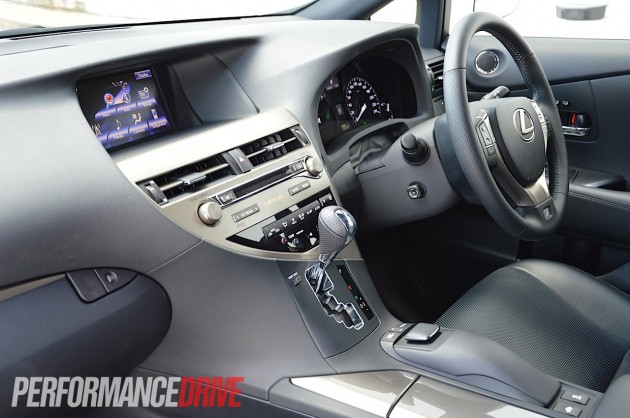 In the very back, the 2012 RX offers 446 litres of cargo space. This can be increased to offer 825 litres by flipping the rears seats down. The rear seats can be folded handily via a lever in the boot, or by a conventional ratchet on the rear seats.

The RX 450h cargo area capacity is the same as what is offered on the non-hybrid RX variants (270 and 350), proving the electric components have little to zero intrusion on cabin space. 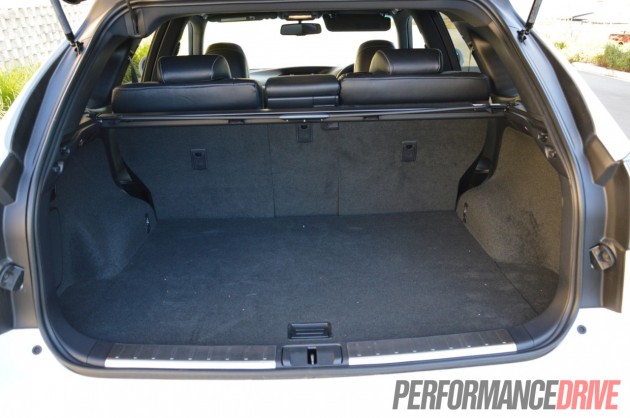 The 2012 model update brings much more grown up styling to the RX. It showcases masculine and sharper cheekbones, slightly more aggressive wheel arches, and that oh-so-premium new spindle grille design with chrome accents.

In the flesh, it does look rather striking. It’s rich but it also brings a satisfying level of sophistication to the SUV market platter. The F Sport highlights, including the increasingly popular dark ‘shadow’-style 19-inch alloy wheels and the sharper lower front lip beef up the RX’s stance and, dare we say it, street cred (a hybrid with street cred – is that possible?).

Similar to other Lexus vehicles recently introduced, perhaps the biggest highlight in safety for the RX is the radar-guided cruise control. It allows you to cruise along at a safe distance from the vehicle in front of you without the need to hit the brake pedal if the car in front slows down. Instead, the clever system brakes the RX itself. A warning buzzer sounds if the speed drops below 40km/h though, and there is no more automatic braking. 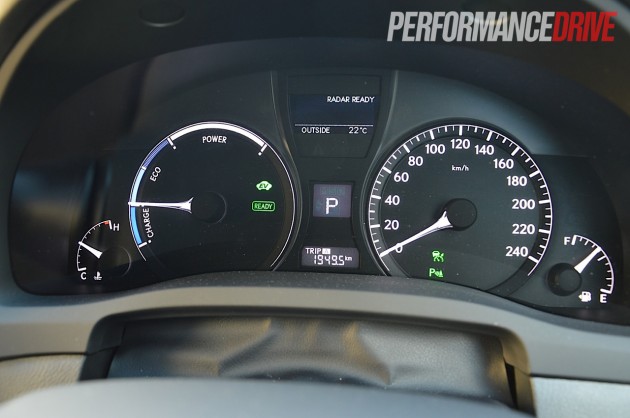 As we’ve mentioned previously in a Lexus review, the system isn’t quite as smooth as similar systems offered in rival vehicles, such as those from Volvo. In such systems, the gap between you and the car in front can be adjusted. This means in heavier freeway traffic conditions you can adjust the gap to be a bit smaller.

In the Lexus, the gap is a little too large by default and you find other motorists jumping in front. When this happens, the system automatically brakes, and then speeds back up again to the set speed, wasting fuel. It seems like the radar is a fraction slow at calculating the speeds of vehicles in front. It doesn’t stop it from being a highly advanced system though, and a great step in automotive technology.

Other safety measures include eight airbags, traction and stability control including a ‘hybrid snow mode’ for very loose and slippery surfaces, height adjustable pre-tension seatbelts front and rear, and a first aid kit in the back. Australia’s ANCAP hasn’t yet tested the RX 450h, and neither has Euro’s NCAP program. Every current Lexus vehicle that ANCAP has tested has been rated the full five stars.

So, with the F Sport package, is the latest 450h a fun SUV to drive? Well, that all depends. If you don’t mind continously variable transmissions, then yes, the 450h F Sport can be a pleasure to pedal through a twisty mountain road.

For us, CVTs are just a fun-killer. The transmission doesn’t ever change gears. If you floor the throttle, you’ll simply be left in a slurring engine tone that holds at around 5000rpm until you reach your desired speed. (See our previous GS 450h acceleration video for a better understanding.)

Apart from the CVT, the new RX feels much more taut than the previous model. The steering is more engaging and the F Sport suspension irons out almost any hint of body roll. It’s not quite the driver’s car as say a BMW X5, but like all Lexus vehicles, the handling is very solid and sure-footed. It’s a thoroughly engineered vehicle, and you can tell when you’re behind the wheel. 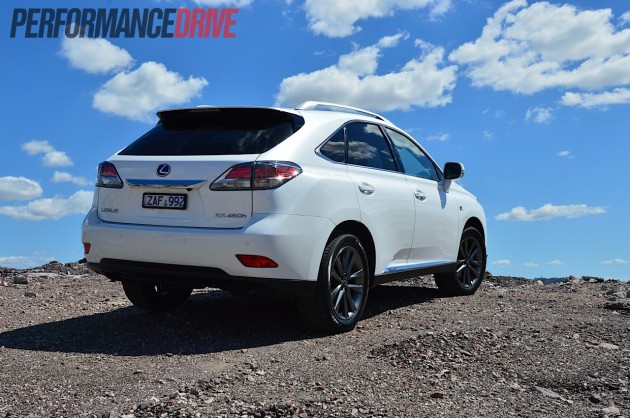 Being a hybrid, the key interest is going to be on the fuel economy. During our test, including a run from Sydney to Melboure, the 450h averaged around 8.6L/100km. It’s not a bad figure, especially for a 2000kg-plus SUV, but it’s not quite as good as we were hoping. For most of the trip we simply had the cruise control set to around 110-115km/h, with the drive setting in ‘Eco Mode’.

The reason we think we didn’t experience the high eco benefits a hybrid is renowned for was due to the relatively high speed we were travelling at for a majority of the time. The electric motors couldn’t really be utilised at higher speeds. Watching the on-board energy monitor, we noticed petrol power was being used most of the time on the freeway.

In the city is where this hybrid setup really shines. Leaving off from the lights the RX 450h silently shifts away under electric power only. It’s not until 45km/h is reached – or if you push the throttle reasonably deeply – before the petrol V6 fires into life. This, in the long-run, saves lots of fuel.

The electric motors play an especially crucial part in conserving fuel during take off. Taking into account the fact SUVs are inherently heavy, it usually requires lots of go-juice to get them up and going. With the 450h, the electric motors do the hard yards to get things going.

This is the perfect SUV for those who simply want a high-riding vehicle for the city but don’t want to waste time and money filling up on fuel every second day. 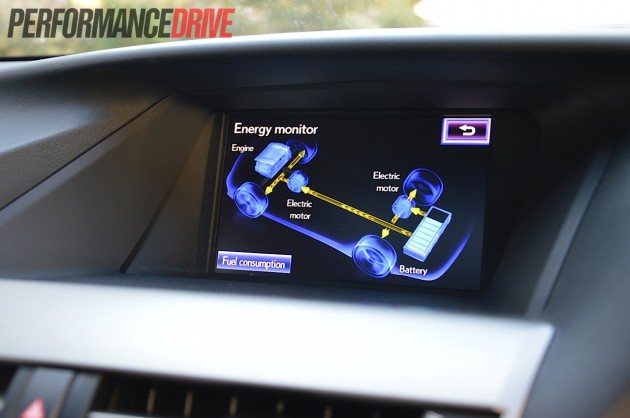 The RX 450h F Sport is the kind of vehicle you buy and keep for the long-term. Sure, it’s got the sporty appeal with the fancy body styling tweaks and the dark alloy wheels, but it’s the foundations of the package that should interest most; one word, Toyota.

Whether you love or hate Toyota, the company knows how to build vehicles. Everything is well configured and user-friendly, there’s plenty of room and excellent comfort, and you just know it’s all going to last.

With Lexus being an extension of Toyota, a further refined version of the already super-trustworthy company, a decision to buy is pretty much fail-safe. It’s a high quality product that’s also multipurpose and perfect for weekend getaways, and it’s all backed by Toyota reliability.

The fact that it undercuts its leading rivals by tens of thousands of dollars – depending on vehicle and options – makes it a very smart buy in our books. We just wish it came with a more conventional sports automatic… then again, there’s always the thirstier RX 350. 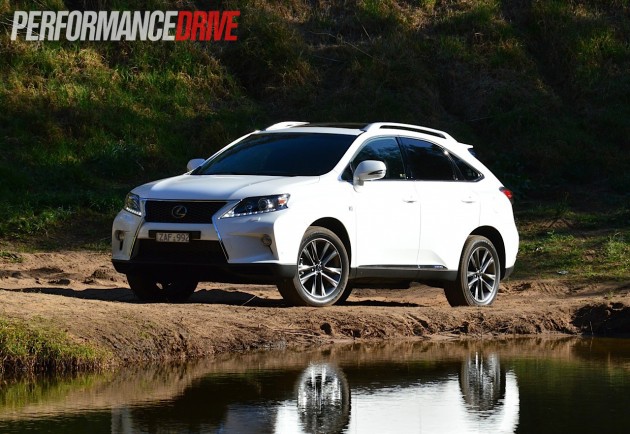 (There are no other hybrid SUVs currently on the market that fall in this category. The vehicles below are suggested for their price and fuel efficiency and don’t necessarily match up in terms of equipment and model grade. The Lexus 450h is the flagship.)

Haval sales up 90.3% in Australia, driven by H2 small SUV