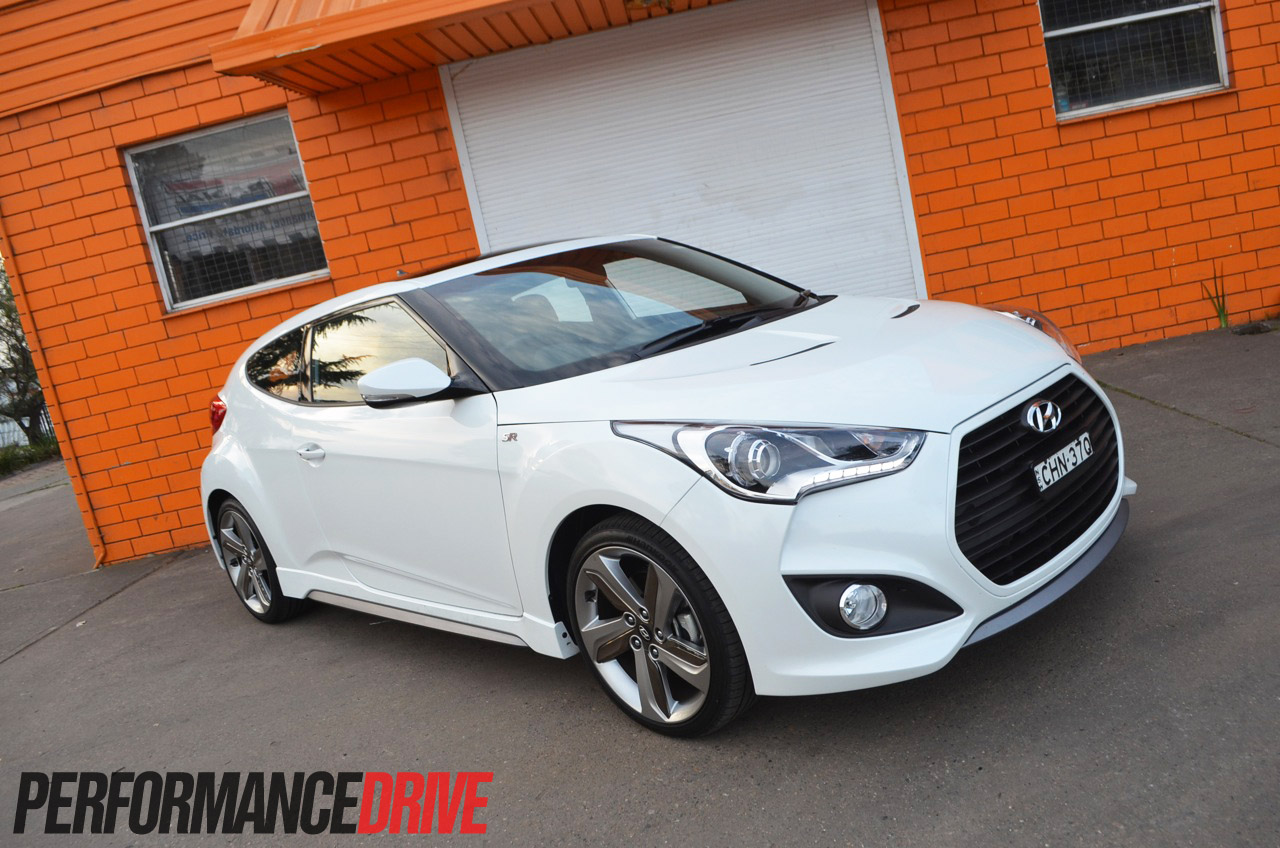 The 2012 Hyundai Veloster SR Turbo is the Korean carmaker’s first go at taking on the hot hatch segment in Australia. Lucky for Hyundai, it’s a cracking little car that is proving quite the competitor against its more expensive rivals. 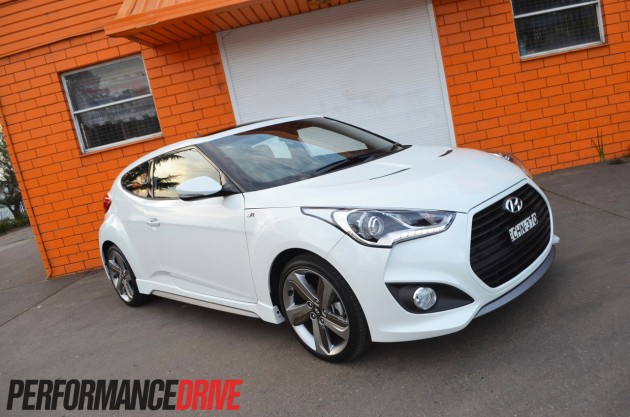 The first bunch of Velosters – Veloster and Veloster Plus – were launched back in February 2012. Whilst at the launch of both cars, PerformanceDrive was given a live glimpse (video here) reassuring all motoring fans that the Turbo hatch-meets-coupe variant was on its way to Australia.

Well, it’s been on our shores for the best part of six months now, and it only takes one look at a busy road to spot one. And for good reason too. Let us explain. 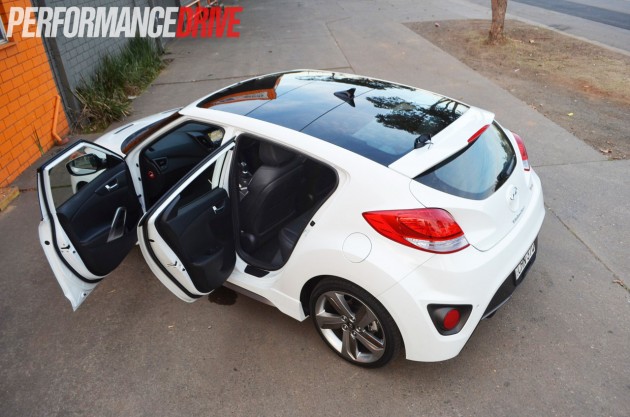 First impressions of the Veloster Turbo are the engine is certainly feisty, the handling is agile, and it’s laden with gizmos and more creature comforts than a day spa.

Under the bonnet sits Hyundai’s GDi 1.6-litre engine, albeit with a nifty twin-scroll turbo bolted up. Power results in 150kW and 265Nm; a 46 per cent jump in power and a 60 per cent jump in torque over the naturally-aspirated variants. 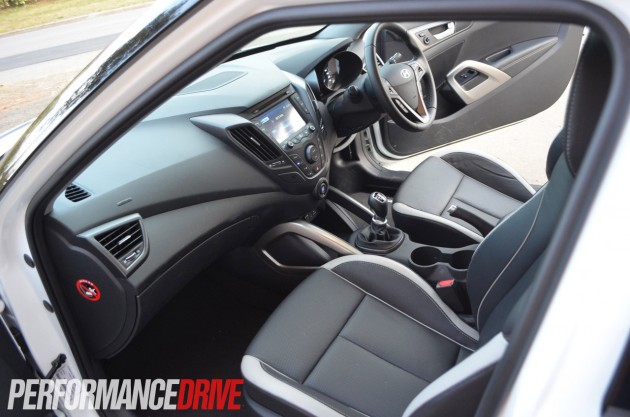 Prices for the SR Turbo start at $31,990 for the manual, and $33,990 for the six-speed self-shifter. Unlike the Veloster and Veloster Plus’ dual-clutch auto, the SR Turbo auto is a conventional hydraulic unit.

As soon as you open the driver’s door you’re greeted with two chunky sports seats with ‘Turbo’ insignia stitched into the seatbacks. Sit down and you’ll see they are certainly as comfortable as they look.

Entry into the rear is via the passenger side only. Head and leg room in the back isn’t as generous as most four-door hatches, but it’s something (if you’re not overly tall) your passengers can live with. 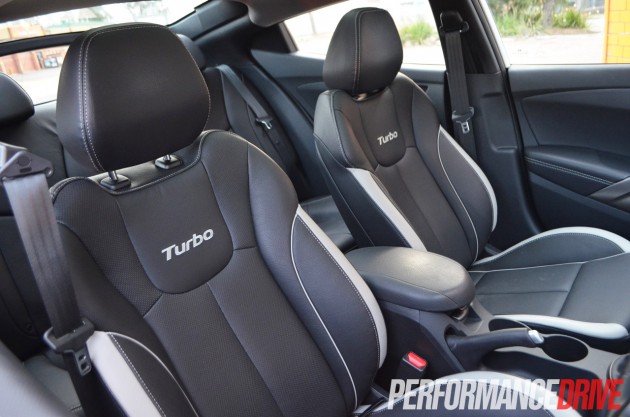 Both front and rear seats are nicely wrapped with leather that’s soft to touch, but certainly isn’t the most luxurious of hides.

The centre piece of the dash is a seven-inch LCD touchscreen that controls the four-speaker stereo and the satellite navigation system. Sound quality from the audio unit certainly packs a punch, thanks to a centrally-mounted front speaker, two tweeters, and a subwoofer. You can connect all of your audio needs via USB, aux-in, or stream via Bluetooth. 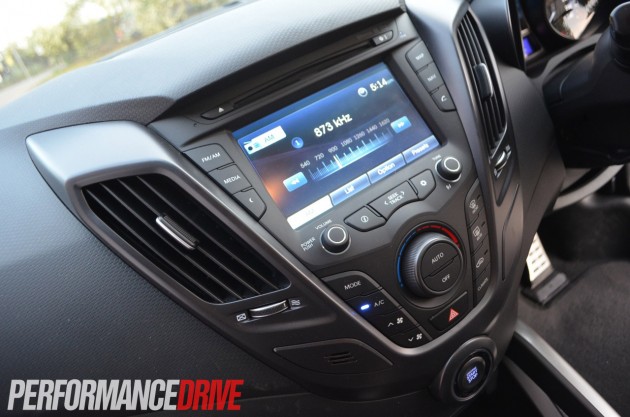 You might have heard us mention the Veloster is laden with loads of standard kit. The Turbo hatch-meets-coupe boasts features such as a reverse camera, keyless entry, rear park assist, day/night rear-view mirror, push button start, a tyre pressure monitoring system, and heated external mirrors.

Also standard on every SR Turbo is the very funky-looking panoramic glass roof with a motorised sunblind.

The Veloster is unique in that it offers coupe styling on one side (driver’s), and a convenient two-door design on the other. Hyundai calls this design ‘cool coupe meets smart hatch’. From the outside, it’s not something you notice about the car right away, not at least until people hop in/out.

Overall styling of the Veloster is quite aggressive, with flared guards all round, a low roofline, and a large open-mouth grille; it almost looks like a rolling clenched fist. 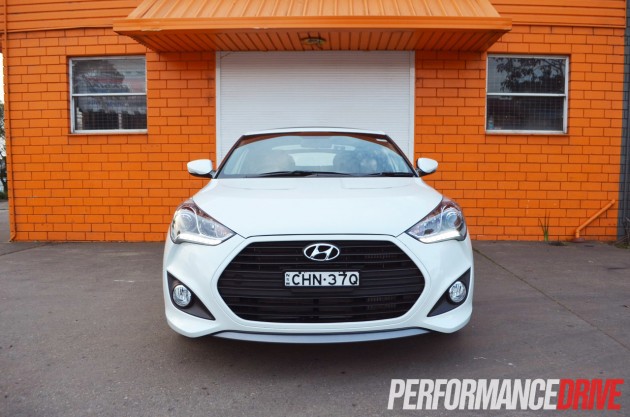 The SR Turbo is equipped with six airbags, including driver and passenger, thorax and full-length curtain airbags. For those with children in mind, there’s two child restraint anchor points in the rear. Like the regular Vesloter, ANCAP has awarded a full five-star safety rating.

The Veloster’s driving position makes you feel right at home. The low-slung seating position and supportive sports seats are excellent for tackling corner after corner.

Giving the throttle a lashing results in lag-free acceleration, making light work of zipping through traffic, or driving actively. The twin-scroll turbo boosts up almost instantly, providing a meaty mid-range that lets you pull from very low in the rev range – meaning you don’t have to constantly shift down gears to find power. 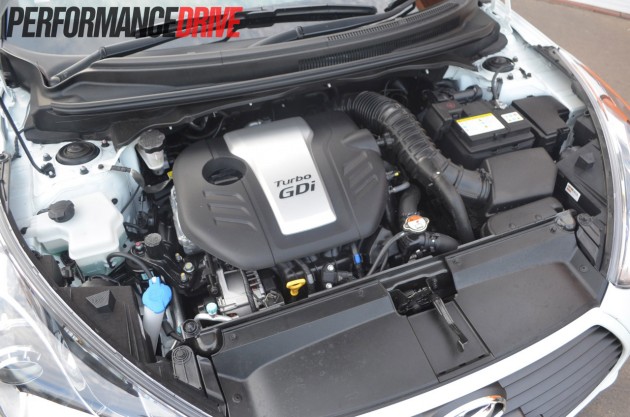 The Veloster feels surefooted and fails to present any significant torque steer, even under hard acceleration. There’s no fancy limited-slip diff, rather, Hyundai has tuned the stability control to detect and deter any slip.

While the gearshift is smooth and notch free, it does lack that rewarding mechanical feel purists will look for. 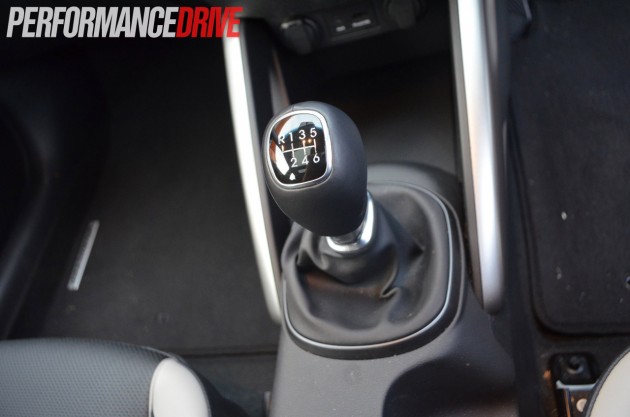 Rather than import the SR Turbo and sell it as is, Hyundai Australia has covered thousands of kilometres tuning its Sachs dampers and making sure the spring rates suit local conditions. The result is a ride that’s composed, and hard to upset. It’s certainly a good compromise of grip and spinal satisfaction.

Given the SR Turbo is Hyundai’s first punt at the hot hatch market, the company had to ensure it was good. And it is. It’s a great little hatch/coupe that loves having its rev needle wound out and its nose pointed at a series of bends, all while you sit in a creatively-styled cabin that’s certainly not short of standard and desirable features.

Considering pricing starts from just $31,990, you get a lot of car for the money. While it’s not a hardcore hot hatch with proper front diff trickery or a snarling 2.0-litre turbo powerhouse (think Megane RS and Ford Focus ST), it doesn’t have the high price-tag cars like that command. 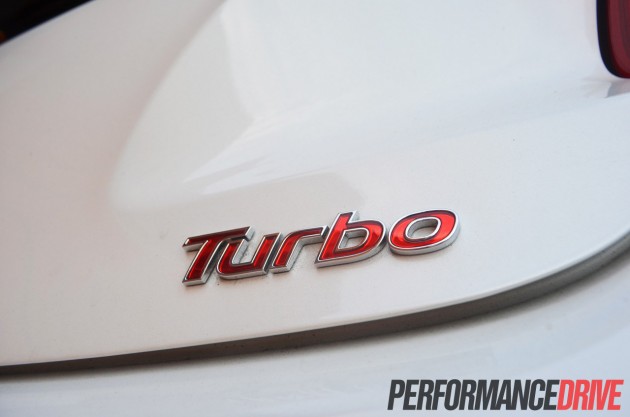 If your new car priority checklist looks a little like this: fun to drive; easy to drive; loads of standard equipment; sporty interior; funky styling; trendy; reasonably fuel-efficient; needs to be versatile, then the Veloster Turbo won’t disappoint.

MINI Cooper S – 1.6-litre turbo four-cylinder, 135kW/240Nm – 1150kg (three-door) – $40,700
Whether you love the modern interpretation for nostalgic reasons, or simply because they’re cute to look at, there’s no denying the Cooper S is a cracking little hot hatch.