Holden is looking to really shake up the very popular small hatch and sedan segment this year, and the new Australian-developed 2014 Holden Cruze is the piece of artillery selected to do just that. With class-leading tech inside, sharper pricing, and a new powerful 1.6 turbo for the sports variants, it’s easily one of the best-packaged offerings in the class. 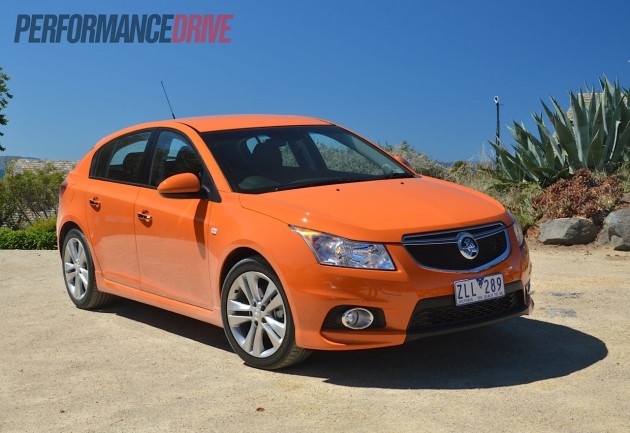 The Australian media launch of the new Cruze took place in the rugged and scenic regions of Hobart in Tasmania this week, however, the new model won’t actually go on sale until April. 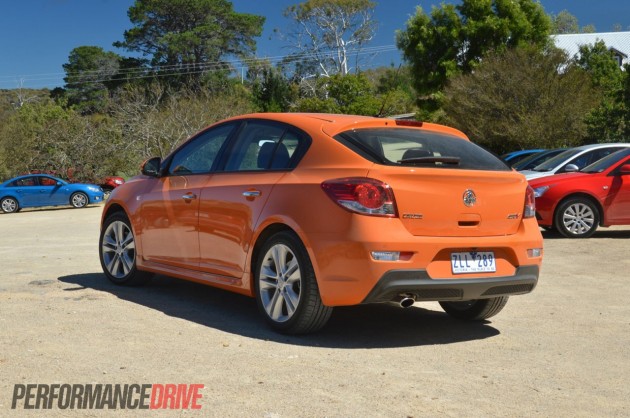 Although it’s not a completely new model, the interior has been revised with a new seven-inch MyLink multimedia touch-screen making its way into all models, while vast revisions have been made to the automatic transmission – particularly on the SRi and SRi-V – and a new 1.6-litre turbo four-cylinder sits under the bonnet of the SRi and SRi-V sports variants.

The Holden Cruze was first introduced locally in 2009, and since 2011, it has been built right here in Australia. For the 2014 version, it’s even more Australian, so much so, international GM arms are interested in borrowing some of the engineering and calibration that the Holden Australia teams have developed, according to Holden engineers that we spoke to during the local launch. 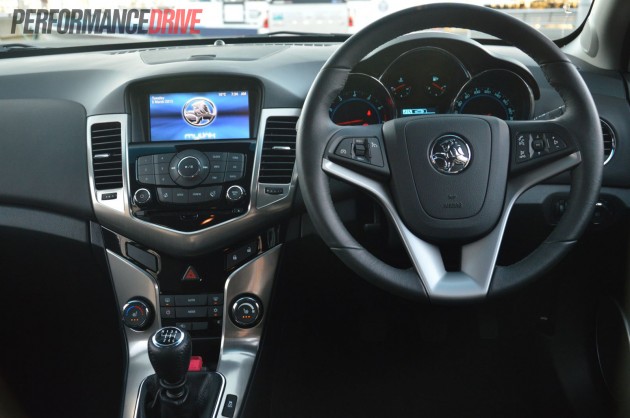 So what are the main changes for the MY2014 Cruze? The first big difference is the model lineup. It’s now kicked off by the Equipe (replacing the old CD) and CDX, featuring a ‘comfort tune’ drivetrain and suspension.

The entry-level models are topped by the SRi and SRi-V, which feature a ‘performance tune’ drivetrain and suspension. The SRi and SRi-V also now come with a 1.6-litre turbocharged four-cylinder engine, also seen in the Opel Astra, producing 132kW and 230Nm.

The other main difference with the 2014 model is the introduction of Holden’s new MyLink seven-inch multimedia touch-screen with Bluetooth and web-based music applications. The system is standard on all variants and has been developed alongside the system that will be offered in the upcoming VF Commodore.

Perhaps the most surprising element of the new model that consumers will be interested in is the new price structure. Despite the added engineering and in-car technology, the base model Cruze now kicks off from $19,490 (down from $21,490 of the previous CD), followed by the CDX from $21,490, the SRi from $22,490, and the “warm hatch” SRi-V from $26,490. 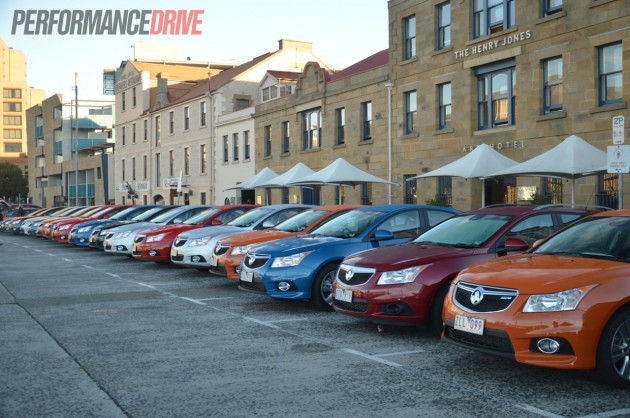 Although much of the interior is largely unchanged from the 2013 model, the 2014 version gets an all-new centre dash fascia incorporating not just the MyLink touch-screen, but also a more premium design with flowing lines and a sleeker integration of air vents.

All variants come with the MyLink touch-screen as mentioned, with Bluetooth connectivity and streaming. All variants also get alloy wheels, and a ‘comfort’ tune or ‘sports’ tuned drivetrain and suspension, depending on the model. 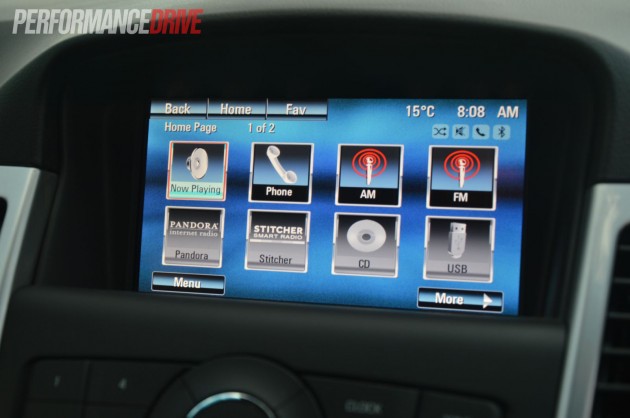 Since we are focusing on the performance side of things, we’ll concentrate on the SRi and SRi-V variants for most of this review. Both come with the new Generation 2 six-speed automatic (Opel Astra uses the Gen 1 version), and the 1.6-litre locally tuned turbocharged four-cylinder engine which is sourced from Hungary.

The SRi comes with sporty seats with decent side bolsters to hold you in, and are trimmed in an aqua blue mesh-like material providing a two-tone theme with a mostly black decor. The seats might not look like the sportiest items, but they provide a superb mix of comfort and support for both long journeys and vigorous mountain climbs.

Stepping up into the SRi-V, the interior receives a leather upholstery, covering the same sporty seats, as well as some cool titanium-look metallic trimmings around the centre dash fasica. The SRi-V comes with some significant added features over the SRi, such as heated front seats, a rear-view camera, keyless entry and push-button start, and climate control air-conditioning. Satellite navigation will be available from mid-year. 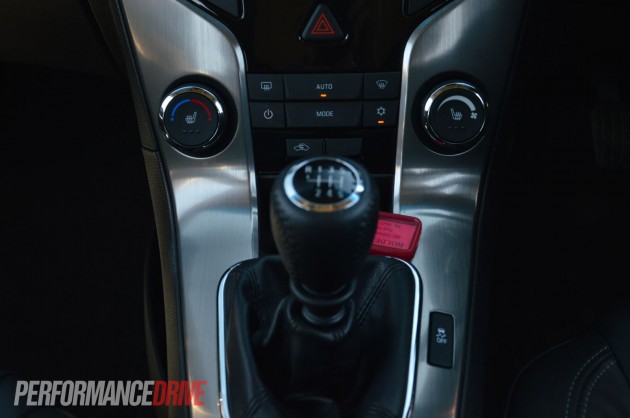 The 2014 model doesn’t feature many major changes in terms of exterior design. This doesn’t stop the Cruze being one of the better-looking hatches/sedans in the segment though, in our opinion. It showcases smooth lines, curves in all of the right places, and a modern GM face. It also blends in well with the Holden showroom, and kind of looks like a miniature VF Commodore.

Helping the SRi and SRi-V stand out and above the Equipe and CDX is a discreet bodykit with a lip spoiler on the boot lid of the sedan, and a set of 17-inch alloy wheels for the SRi, and new 18-inch alloy wheels for the SRi-V. The 18s on the SRi-V don’t feature significantly lower profile tyres, which means the overall diameter of the wheels is larger than those on the SRi. This helps to maintain ride comfort.

Australia’s ANCAP hasn’t specifically crash tested the 2014 Cruze yet, although, it has tested previous models that are perhaps less-equipped and they were given the full five-star safety rating. 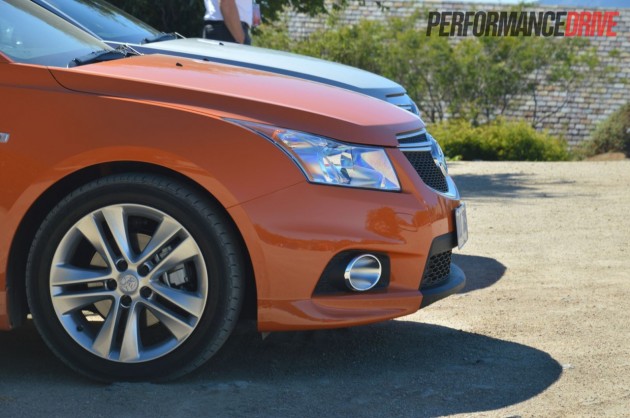 Both of the entry-level variants – the Equipe and CDX – feature a comfort tuned suspension and a relaxed gearbox calibration. While we didn’t get a chance to drive the CDX or the Equipe 1.8, driving the Equipe 1.4-litre turbo (taken straight from the 2013 SRi-V) is surprisingly sporty.

The suspension is reasonably supportive for active driving styles, and body roll, while evident, isn’t enough to make you or the car feel overly nervous when really pushed hard through the corners. Any roll or pitch that you do notice is usually only experienced during the initial tip-in or the final moments before the car is straightened back up. 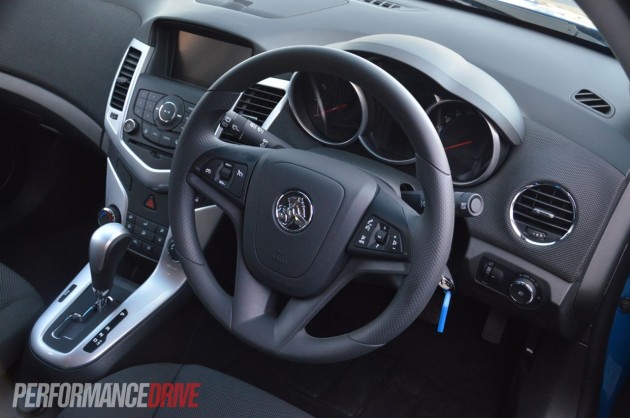 The 1.4-litre turbo engine retains the 103kW/200Nm rating of the previous model. It provides good shove with decent low-end torque. It’s certainly not going to blow your socks off with grin-stretching acceleration, as that’s not this model’s market segment, but it does offer enough grunt to support fun enthusiastic driving stints through a mountain pass, for instance.

It feels as though the comfort tune Gen 2 transmission hasn’t been tuned to be quite as sporty as the SRi and SRi-V’s gearbox, which is great for an entry-level car, but we feel it does tend to hunt around for gears a bit too much on hilly cross country roads. The engine’s small capacity also prefers to be up and spinning rather than picking up from down low, this may be the reason the transmission likes to frequently swap cogs. 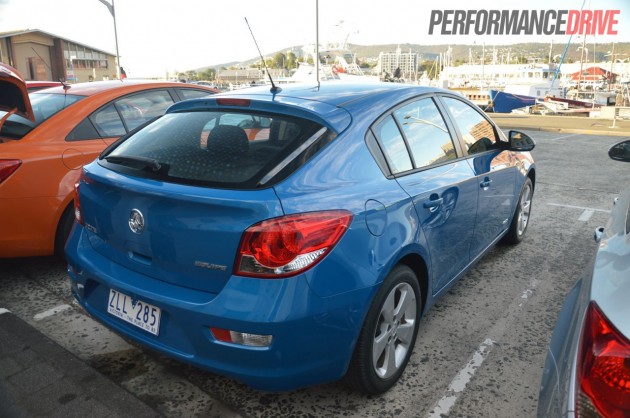 Stepping into the SRi and SRi-V, you immediately feel and appreciate the work that engineers at Holden have put in. The performance or sports suspension soaks up Aussie roads particularly well, especially over the bumpy and multi-camber back roads in Tasmania that we drove on.

On smoother roads, sure, the suspension could be firmer for an even flatter and more solidly braced feel, however, for the average buyer, the 2014 Cruze is right up there and beyond some of the more serious (hot) hatches on the market in terms of grip and capability.

Holden engineers have openly said that the SRi-V is not a ‘hot hatch’ in the traditional sense, saying that it’s more of a ‘warm’ hatch directed at those who want a compact and practical hatch but also enjoy driving enthusiastically every now and then. 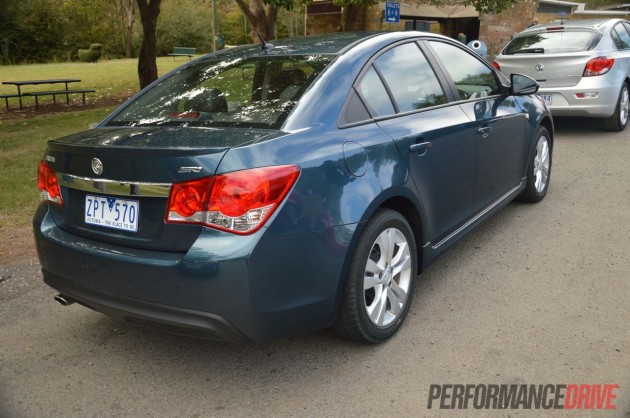 The handling and ride for the SRi and SRi-V is wonderfully balanced. It’s not too firm to ruin the ride or comfort, and it’s not under-sprung or under-dampened. In other words, it never fails to absorb some of Australia’s more demanding roads and some of the more ordinary roads.

As for the 1.6-litre turbo engine, it feels elastic and mostly progressive. Torque builds from down low, and power climbs as the engine speed rises. Holden engineers told us during the launch that they purposely calibrated the 1.6 to offer strong low-end to mid-range torque as that’s where most drivers will spend their time.

We think it’s a good comprise. Although the engine could be ‘boosted’ up to provide a more eager top end, most drivers will appreciate the low-down pick up, especially in dense traffic and city driving conditions. 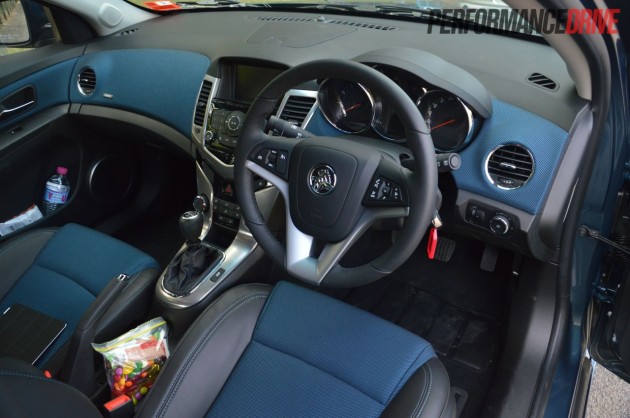 Using the new six-speed automatic transmission, the SRi-V can almost be transformed into a true hot hatch. Holden engineers have worked in something they call ‘performance mode lift foot’ (PMLF), which is basically the sport mode of the transmission engaged by flicking the gear lever across.

In this mode, the transmission actually learns how you are driving and will adapt to your style. After speeding some time with it during our drive, we were amazed by how quickly the gearbox responds to your driving. During high tempo winding roads, the transmission downchanges as you lead into a corner, ready to pull you around and blast out the other end. It will also hold onto gears right up until the redline.

Almost immediately after driving actively, turning to a smooth and gentle rate, the gearbox tames down and changes up earlier and doesn’t downchange as early when you lead into a corner (or when you lift off the brake pedal). The transmission is easily, in our opinion, one of the most impressive highlights of the new Cruze, and something we should all be proud of – given it was developed here in Australia. 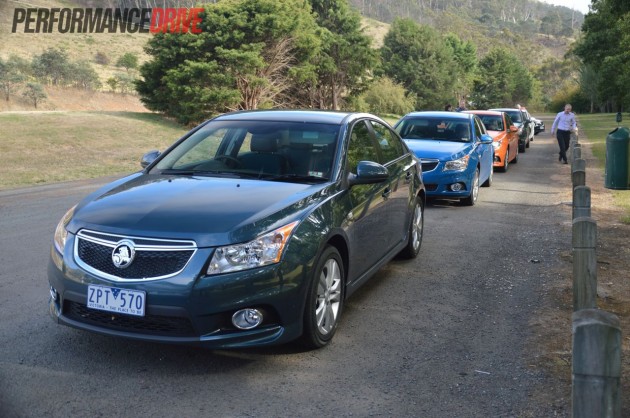 As the Holden managing director Mike Deveaux said during media presentations, the 2014 Holden Cruze has been designed to “reset” the perception of what consumers think about the Cruze. It was developed using the philosophy of “listening” to what consumers wanted, “understanding” how these demands could be met, and “acting” upon those circumstances.

As a result, you can really feel the car has been properly engineered for Australians in Australian conditions. The ride is absorbent enough to handle our shabby roads very well – even better than some of the more premium European rivals – and the right amount of technology is worked into the interior to help it put up a strong fight against the competition.

We agree with Holden. If you have some preconception of what the Cruze is all about, and how it feels on the road, we think you should wipe the slate clean and start again with the 2014 model. It now feels like a high quality product, and easily one of the best in its class when taking a look at its price. 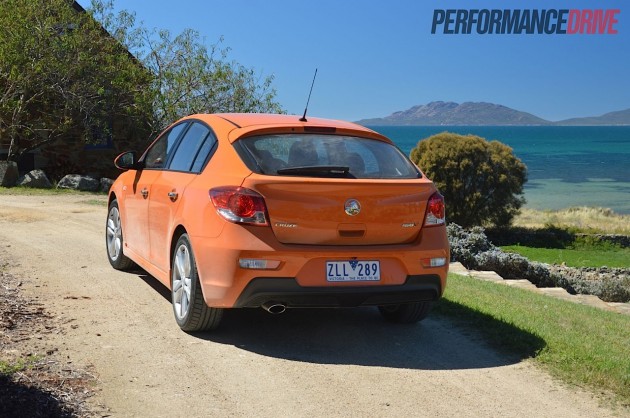 
(Note: Rivals below are based on the perspective of the Cruze SRi and SRi-V)


Ford Focus Sport – 2.0-litre turbo four-cylinder, 125kW/202Nm – 1368kg – $25,890 (manual hatch)
One of the most popular vehicles in the segment. A strong contender with many variants to choose from; turbo-petrol and turbo-diesel. Handles great too.


Mazda3 SP25 – 2.5-litre naturally aspirated four-cylinder, 122kW/227Nm – 1342kg – $31,490 (manual)
Considered one of the benchmarks according to Holden engineers. It blends Mazda’s renowned reliability with an attractive design and a decent engine.

BORE X STROKE
Data not available at time of writing