BMW is said to be unveiling the all-new BMW F30 3 Series in Munich in just under two weeks, showcasing an entire turbocharged range. 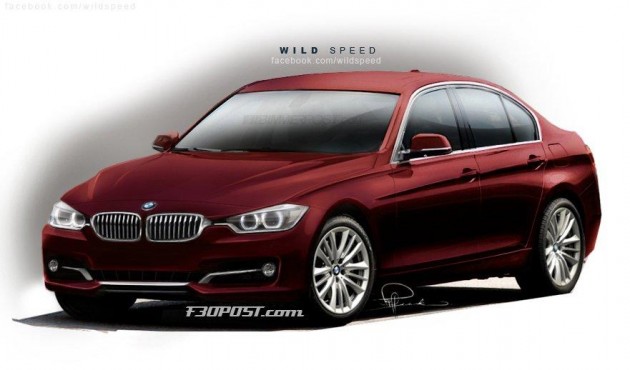 That’s right, as a way of maintaining its environmental lead, every variant in the new 2012 F30 BMW 3 Series range will be turbocharged. As turbocharged engines can be made to run much more efficiently compared with naturally aspirated counterparts as the engine doesn’t have to work as hard to produce healthy power and, more importantly, decent torque.

According to a report by German motoring publication Auto Bild, the new 2012 BMW 3 Series range will kick off with a BMW 316i powered by a 100kW engine. Next up will be the new BMW 320i which will be powered by a 2.0-litre turbocharged four-cylinder developing 135kW of power, and then the BMW 328i which will use the full cream N20 2.0-litre TwinPower turbo four-cylinder – also powering the new BMW Z4 sDrive28i recently announced for Australia – developing 180kW and 350Nm.

As with the current generation BMW 3 Series, the flagship variant will be powered by BMW’s 3.0-litre TwinPower turbo six-cylinder engine developing 225kW of power and 400Nm of torque. A range of turbo-diesel engines will also join the lineup, with outputs ranging from 85kW for the Euro-spec 316d, to a 323d and later, a 330d.

To reinforce BMW’s environmentally-focused theme with the new 3 Series, a BMW ActiveHybrid3 hybrid has also been seen testing on the Nurburgring. The BMW 3 Series Hybrid is said to be powered by the 335i 225kW petrol engine as well as a electric motor system taking combined power to around 250kW. This will be the most powerful 3 Series in the range apart from the full snog 2014 F80 BMW M3.

As mentioned, full details are expected to be announced on October 14. Look forward to our full report covering all the official details around that time.