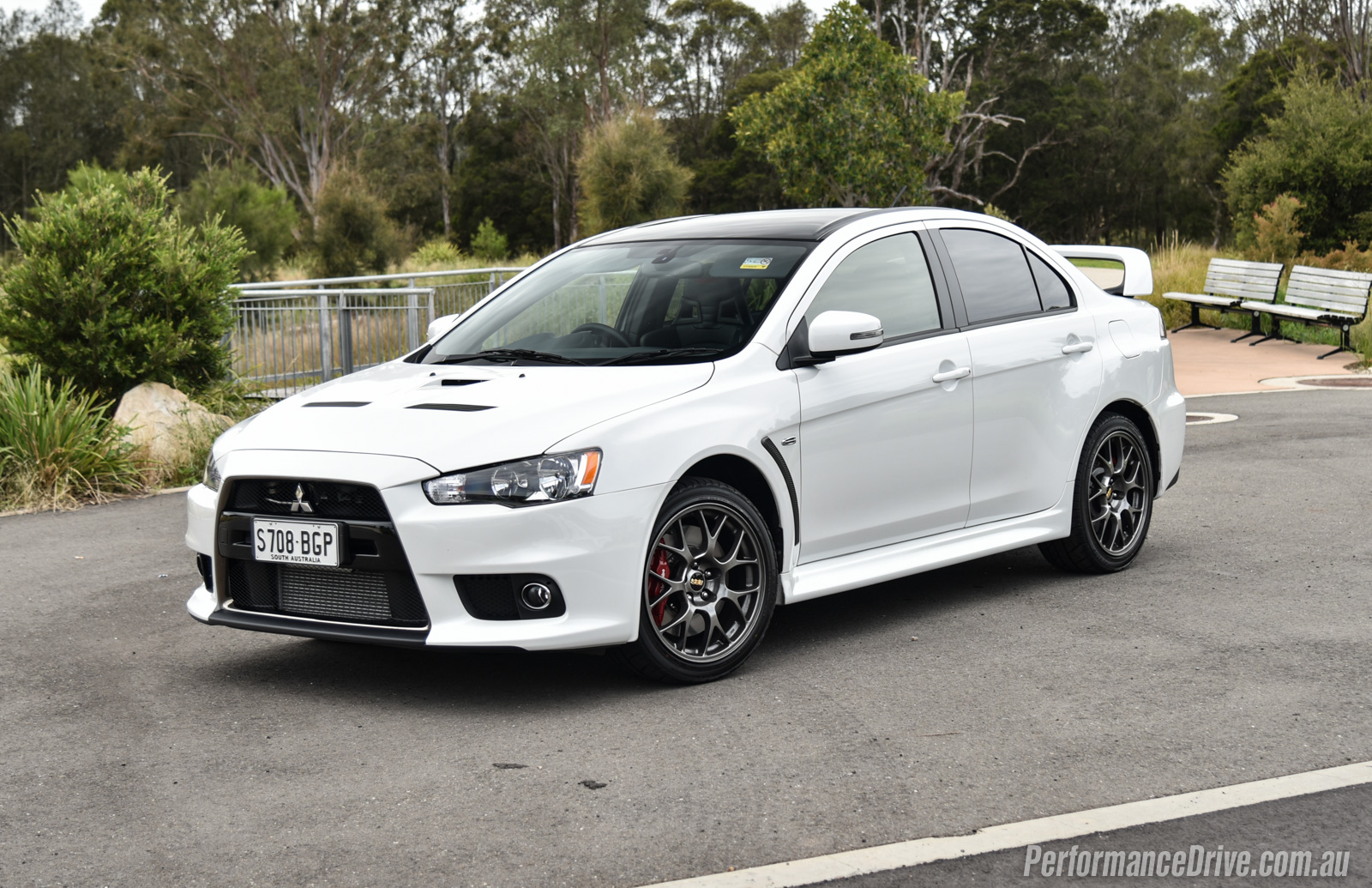 The last Lancer Evolution X was sold off at an auction in America recently, which reminded us what a great car it is and how much we’ll miss it. Mitsubishi doesn’t currently have plans for a new, Lancer Evolution 11, at least that the industry is officially aware of. This means the 2016 Evolution X Final Edition really could be the last-ever edition of the rally-bred super sedan. We thought we’d give it a farewell by going over the 10 things we’ll miss most about the car, in no particular order. 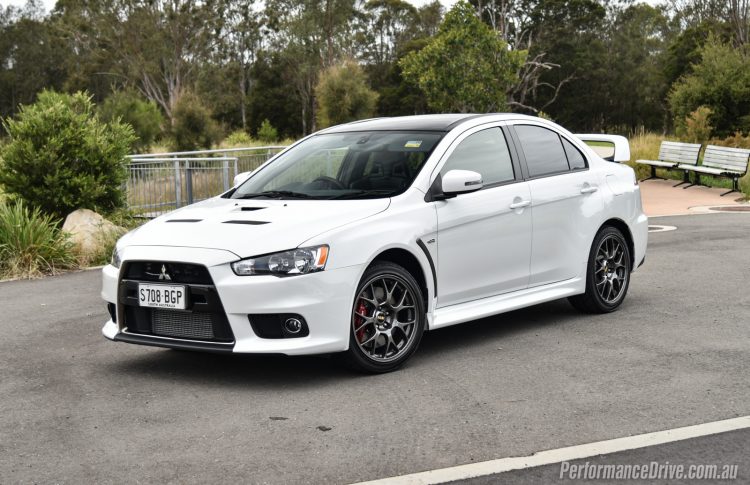 Based on the Mitsubishi Lancer, the Evolution X is a practical and user-friendly small sedan. The only real sacrifices inside are the big Recaro bucket seats in the front. But even with these rear legroom is totally acceptable for this size of vehicle, let alone for a performance car of this caliber. The Evo also has a proper boot, opening up 323 litres.

Passengers are treated to cup holders in the front and bottle holders in all doors, along with some decent and useable space around the centre console, with a handy storage box in the middle. In other words, you could literally use this vehicle as your everyday car, doing the shopping and everything, if you wanted to. 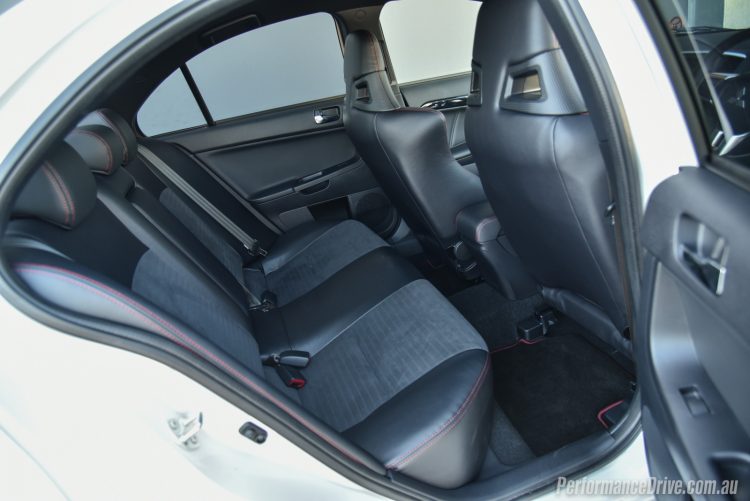 Mitsubishi already has a pretty good reputation when it comes to reliability, with the added piece of mind of a five-year/100,000km warranty. We’re not talking about this though. We mean the reliability of the Evo, specifically. These have been designed to withstand serious abuse out on the track and on rally stages, straight out of the box. They also lend themselves very well to modification, with Japanese tuners known to extract up to 800hp (600kW) from the 2.0-litre engine.

Interestingly, the all-wheel drive running gear has also been known to withstand huge horsepower, even on the grippy drag strip, with driveshafts and gearboxes holding up very well even with some engine tuning and sticky tyres. In standard form, you’ll have to be doing something pretty darn silly to break it, in other words.

Okay, so it’s the name of the car. There is meaning to this though. Mitsubishi engineers have literally been evolving this recipe for 10 generations, building and adapting the same philosophy while infusing the latest and greatest technologies it has developed. We think this is the best method of engineering there is. You only need to look at any high quality product to see that only history and heritage can reset benchmarks and hit pinnacle levels.

With each generation Mitsubishi has extracted more power from a turbo four-cylinder engine, while improving the all-wheel drive drivetrain to make sure the extra power is transferred in the most optimal way possible. None of the power is wasted in the drivetrain. Even better, the rest of the car is evolved at the same fanatical attention to detail, including the brakes, suspension, and handling and steering, facilitating excellent balance. 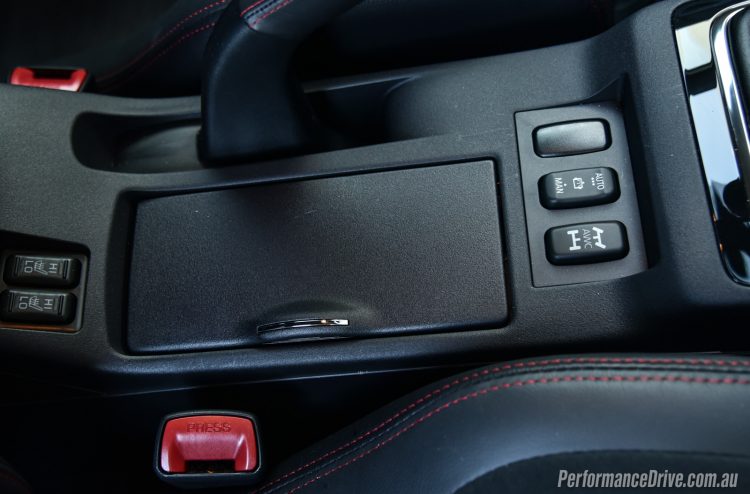 The Evo X has been around now for almost 10 years, since debuting in 2008. Even so, it does showcase some rather cool technologies. Yaw control is one of the most interesting, and advanced. Using a clever drive system the driver is able to engage in what’s called drifting with zero counter steer. This essentially means you don’t have to use opposite lock even while you’re drifting. On-board computers are able to continuously calculate what individual wheels require the most engine power to ensure absolute precision and cornering speed in any given circumstance.

All-wheel drive isn’t just all-wheel drive, either. Drivers can select between various drive modes which provide a slight change in front-to-rear bias for power delivery. Driving modes are pretty common nowadays but back when the Evo X was introduced, this was quite advanced, especially as each driving mode is very sophisticated. You get snow, gravel and mud, with each pre-programmed to deal with these conditions. You can view the action of the power delivery live, too, via the special readout within the instrument cluster. 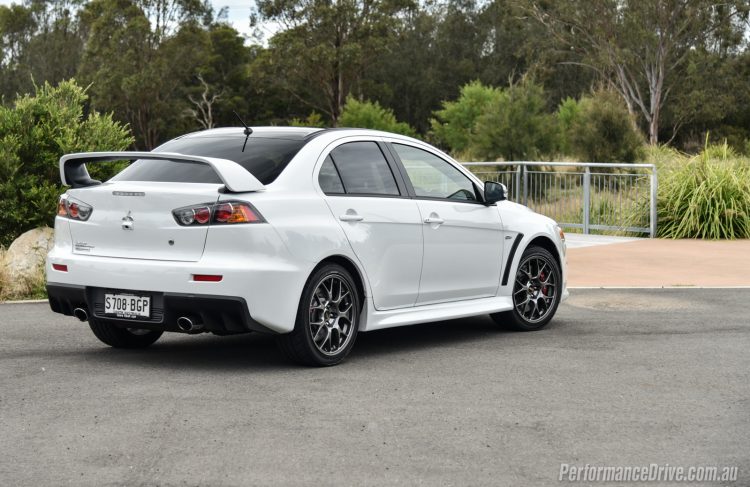 With the technology mentioned above, the Evo X already has exceptional grip. However, the way the chassis has been stiffened and how the overhauled suspension is set up means it is almost unstoppable in the bends. On greasy wet tarmac or in the dry, or on the dirt, the Evo X provides extraordinary adhesion to the ground. This means you can hit serious g-forces and the body remains completely flat. The quick steering also provides pinpoint accuracy, with loads of feedback coming through so you can feel the road and immediately understand what the tyres are doing.

To experience this you really need to be pushing it. Hard. Simply zipping around roundabouts doesn’t do it justice. Pelt down a mountain road or, best yet, hit a track and you’ll quickly see why these things were so successful in motorsport. Even by today’s standards, there aren’t many cars in this price range that can keep up with the Evo X along a demanding piece of road, circuit, or dirt track. 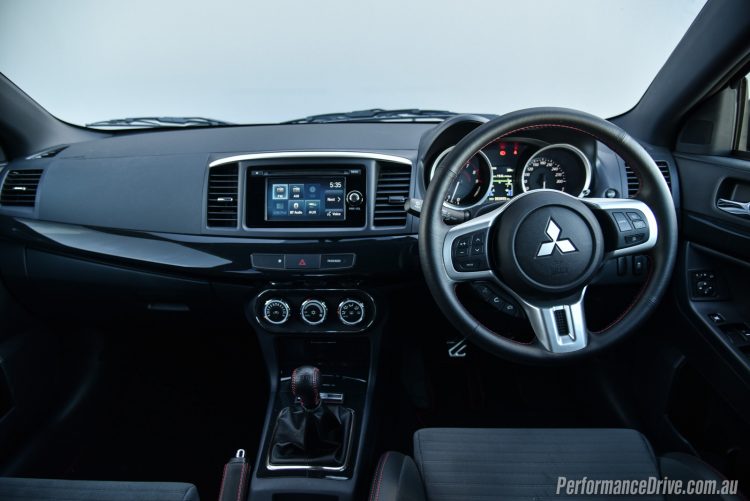 Okay, so it has a massive rear wing and a stonking great intercooler at the front. Apart from these those the Lancer Evolution has always been a bit understated; it’s based on one of the most conservative cars on the market for Pete’s sake. There’s also the issue of non-Evo owners modifying their regular Lancers to look like an Evo, which has seemed to water down the initial surprise and excitement of seeing a real Evo. 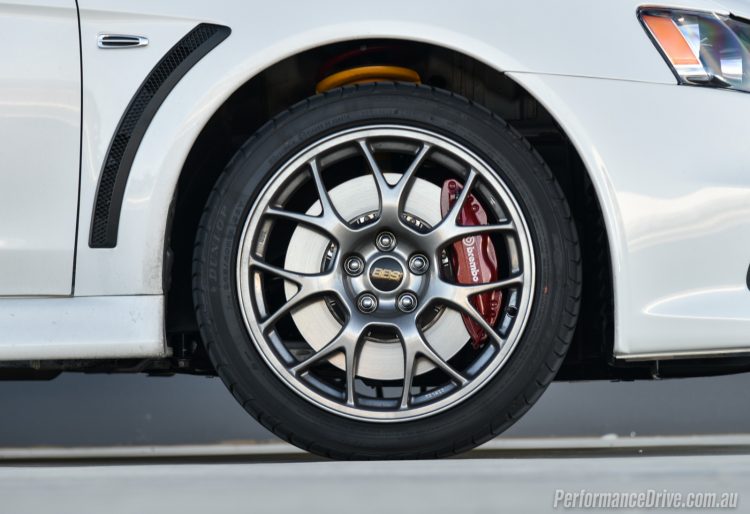 The Evo comes with a set of multi-piston, eye-popping Brembo brakes, with some variants coming with Bilstein dampers and Eibach springs. There’s also aftermarket-style strut braces and lightweight BBS wheels available. Inside, you get a pair of Recaro bucket seats. Some models have come with unique gauges in the cabin as well, along with cool silicon intercooler piping.

All of these parts and those engineered by Mitsubishi come together to offer exception performance. And we don’t just mean 0-100km/h. We mean proper, consistent and reliable track performance. A Japanese publication called Best Motoring used to conduct flat-out endurance tests with production sports car on the circuit and there were a couple of years where the Evo came out as the consistently quickest vehicle. In hot weather conditions too. 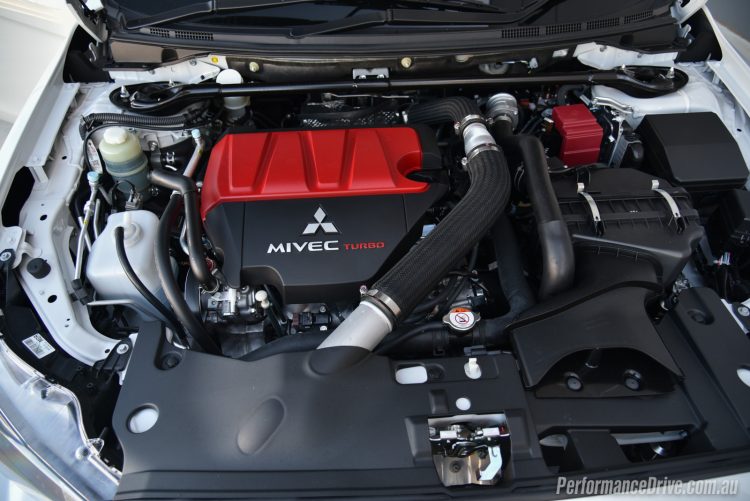 What is specific power output? This simple calculation breaks down the engine’s output in terms of power per litre of combustion capacity. In theory, this gives you a proper idea of an engine’s output and performance efficiency in regards to how much energy it gets out of every cubic-inch of combustion.

The Evolution X in Final Edition form offers one of the highest specific outputs on the market. 227kW divided by 2.0 litres gives you 113kW:litre. Compared with a Ford Falcon XR8 (67kW:litre), a Lamborghini Huracan LP 610 (86kW:litre), and perhaps more crucially the Subaru WRX STI (88kW:litre), you can see the Lancer Evo X, in Final Edition form at least, is a very potent and highly-strung piece of gear. Only vehicles like the Mercedes-AMG A 45 (140kW:litre) and Peugeot 308 GTi 270 (125kW:litre) trump it in this comparison. 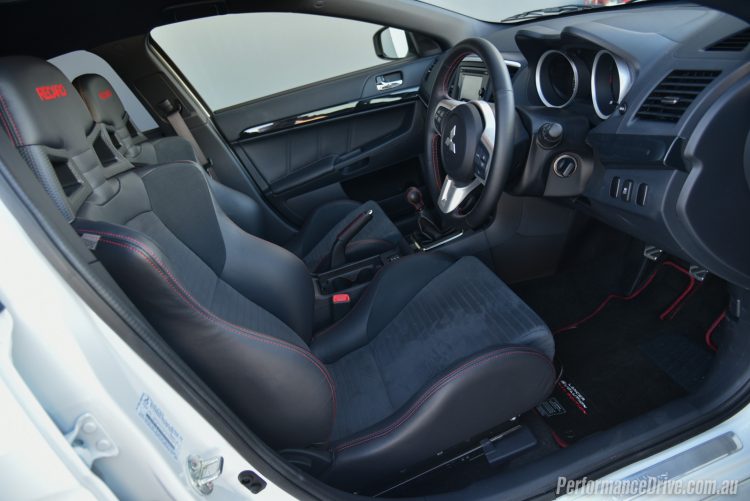 Buyers considering getting into motorsport, especially rallying, should definitely be considering one of these. When you take into account most of the stuff mentioned above, and add in the fact the car is actually developed with racing in mind, it’s simply a no-brainer. In Australia the MR came with a few luxuries and so on but the regular-spec version was primed and ready for racing, even equipped with Recaro bucket seats with harness ports.

Sure, the dash and centre console is pretty basic, and the door trims feel and look like they come from the late 1990s, but that’s the whole point; it’s ready to be stripped out if need be. The battery is already installed in the boot of the car too, which is usually a regulation enforced in many motorsport arenas. This car is built for one purpose; to get you from A to B in as little time as possible and in as little fuss as possible. 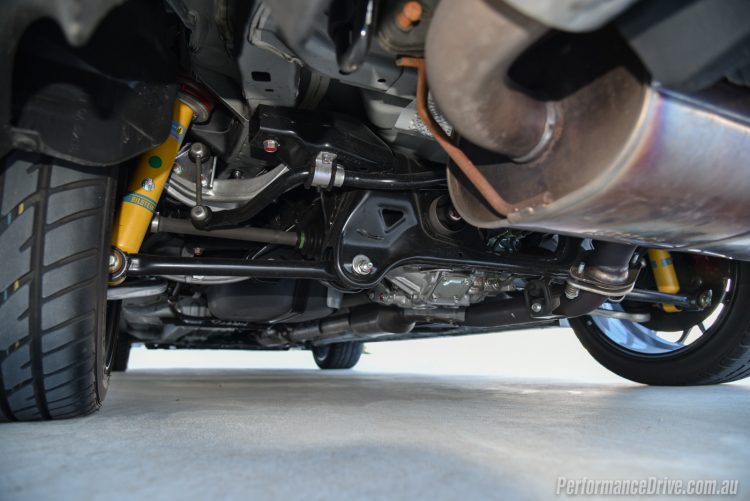 Lastly, the tuning potential. This blends in well with the point above. The sky’s the limit in terms of what you can do with these things in a garage. Whether it’s just some light boost tuning and an ECU flash, or a turbo upgrade, more boost, and freer-flowing exhaust, it’s easy to find your desired level of tuning.

Of course, upgrades aren’t limited to the engine either. There are plenty of things you can do to get it handling and stopping even better than the factory setup. And best yet, parts are readily available. And because there are so many parts specialists waiting to take your money, prices tend to be reasonable due to the competition, especially if you shop around.

Whether you’re thinking of getting into club racing, proper motorsport or rallying, or even if you simply want a quick street car, the Lancer Evolution X will always remain one of the greatest in our opinion. It will be sorely missed. So long, Lancer Evolution X. We can only keep our fingers crossed in the hope a successor eventually arrives.

Head over to our Mitsubishi Evo X versus WRX STI comparison for the full review and performance video.