Callaway has revealed a unique shooting brake version of the 2014 Chevrolet Corvette Stingray which the company plans to put on the market. Called the Callaway AeroWagon, it showcases a pretty cool interpretation of a Corvette wagon, if there ever was one. 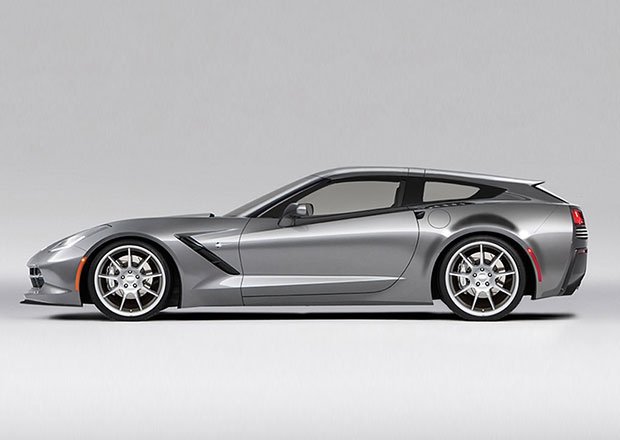 Some of you may recognise the Callaway brand. For those of you who don’t, it has a long history with developing, or re-developing we should say, Chevrolet Corvettes. It more often than not adds an abundance of horsepower under the bonnet of Crovettes and revamps handling for superior performance.

What the company has done here though is a little different. Using the new Stingray as a base, the company has worked in a full carbon fibre rear hatch structure using an in-house Resin Transfer Molding process.

The rear section is only expanded by a small amount over the regular Corvette, featuring slightly stretched side windows in the back and obviously a redesigned hatch layout for access to a larger cargo area.

Under the bonnet, the Callaway AeroWagon does get some of the renowned Callaway performance upgrades. The company hasn’t mentioned any specifics at this stage but says the AeroWagon is able to hit a top speed of 322km/h, a figure the regular 6.2 Corvette Stingray can’t achieve.

The US firm is hoping to put the creation onto the market towards the end of this year. It will only do so though if it receives enough orders. Prices will start at US$15,000, on top of the cost of a Stingray.

What do you think of it? If you’ve always wanted a Corvette but need more boot space, this could be your chance?