If seeing a video of one Ferrari F50 flex its muscles isn’t enough to kill your boredom, watching two be thrashed like they’re cheap rally cars certainly will. Who said rich people aren’t show offs? 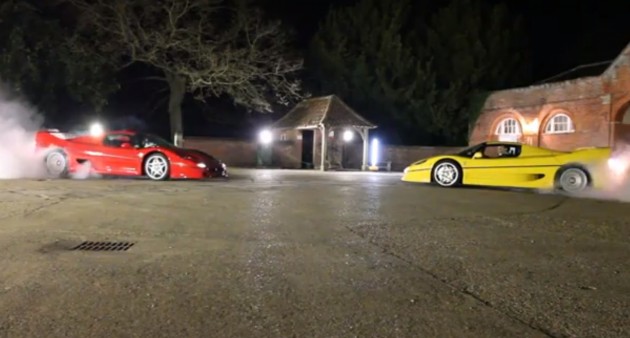 We’re not sure of the outright purpose of this video, other than to destroy tyres. Their driving skills on the dusty, rocky road proves the drivers have certainly done it before.

Purists will argue what they’re doing is very wrong, in a pair of cars that are two of just 349 ever made, but as we all know, there’s always someone (two in this case) in the crowd that’s willing to rock the boat and seek some attention.

At the time of writing, the video had amounted to just over 100,000 views in two days (the video was posted on the 9th of April).

The Ferrari F50 is a rear-drive mid-engined supercar that was made between 1995 and 1997. It’s one of a few supercars that has a removable hardtop roof. The drivetrain features a naturally-aspirated 4.7-litre 60-valve V12 that produces 382kW and 470Nm, combined with a conventional six-speed manual (the F50 was never produced with an automatic transmission). Weighing in at just 1020kg, it boasts a power-to-weight ratio of just 2.67kW:1kg.