Is Bugatti looking to set the fastest production car lap record at the Nurburgring? Judging by this latest video showing a Bugatti Veyron Super Sport taking on the track, it might be. 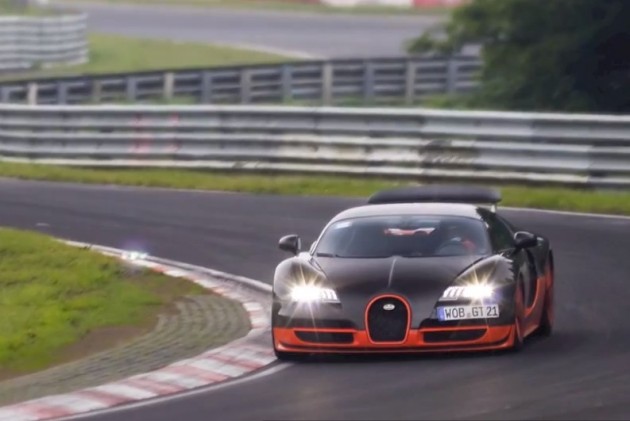 The Bugatti Veyron Super Sport has already set the record for the world’s fastest production car, with a top speed of 431km/h. Its 8.0-litre quad turbo W16 engine, developing 882kW and 1500Nm, certainly has potential to set a new ‘Ring record.

The current record-holder is kind of a funny one. If you include outright production road cars (cars that are produced in numbers – not necessarily road legal), it’s the Radical SR8 LM with a time of 6:48. If you only include road registered production cars, it’s the Gumpert Apollo Sport with a time of 7:11.57.

Almost all of the top ten vehicles in the Nurburgring lap time list are stripped down lightweight specials, whereas the big Veyron, although the Super Sport is a ‘stripped out’ model, it still weighs in at a fairly hefty 1838kg (standard Veyron 1888kg).

Is the weight too high for setting lap records? We’ll be sure to follow this up with official plans and times as soon as we hear more.