Ford has revealed the new Ford Fiesta ST Concept at the 2011 IAA Frankfurt Motor Show, not even a month after releasing images of the 2012 Ford Focus ST. 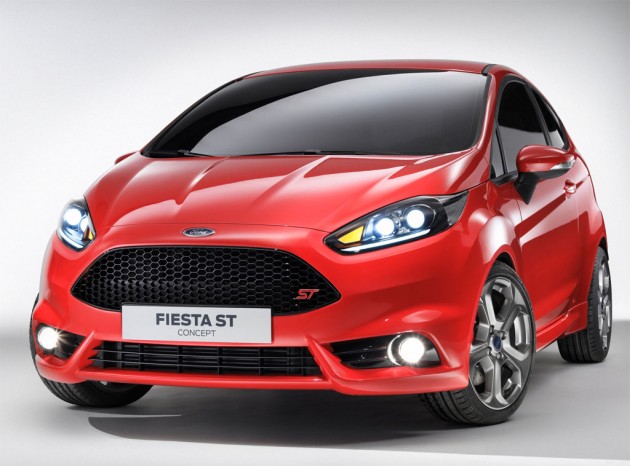 Not since the Ford Fiesta XR4 have we seen a performance-orientated Ford Fiesta in Australia like this, so fingers crossed the 2012 Ford Fiesta ST ‘concept’ makes it Down Under along with the Focus ST in 2012. 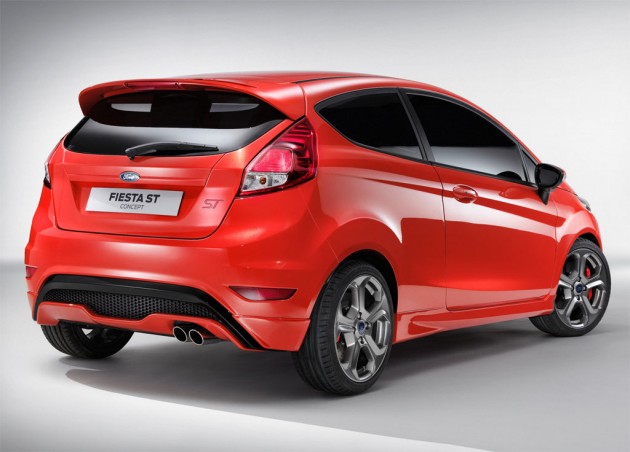 “With a racing silhouette inspired by the global Fiesta race and rally cars currently competing on the world stage, and influenced by the unique appearance of the all-new Focus ST, the new Fiesta ST Concept is an exciting demonstration of the road-going Fiesta’s future potential.”

The Ford Fiesta ST Concept will be powered by a 1.6-litre EcoBoost turbocharged petrol engine, producing 132kW and a very handy 240Nm. Ford claims 0-100km/h times will come up in under seven seconds.

The Ford Fiesta ST Concept sits in the shadow of its racing brother, the Ford Fiesta RS WRC rally car. This new model also shows what the new generation sports model could look like.

The hot hatch will come with a six-speed manual transmission, and should return fuel figures of around 6.0 litres/100km going off Ford’s projected average CO2 emissions of less than 140g/km.

Pumping up the Ford Fiesta ST’s aesthetics is a rear spoiler and diffuser, 17-inch five-spoke alloy wheels, and sporty front and rear bumpers. Recaro sports seats are also said to be standard equipment – pictures of inside the cabin have not yet been released.

The suspension has been tuned to keep the keen punters happy, and also accommodate for less-experienced drivers who want enjoy the ‘sporty’ elements hot hatches have to offer.

Ford hopes the ‘ST’ brand will appeal to motorists on all levels.

“The qualities that define an ST are not limited to one model,” said Mr Capito, Ford director of global performance vehicles.

Though the car is a ‘concept’, chances of this car going into production are pretty much guaranteed. We could expect to see a production 2012 Ford Fiesta ST on sale towards the end of 2012, if not, early 2013.