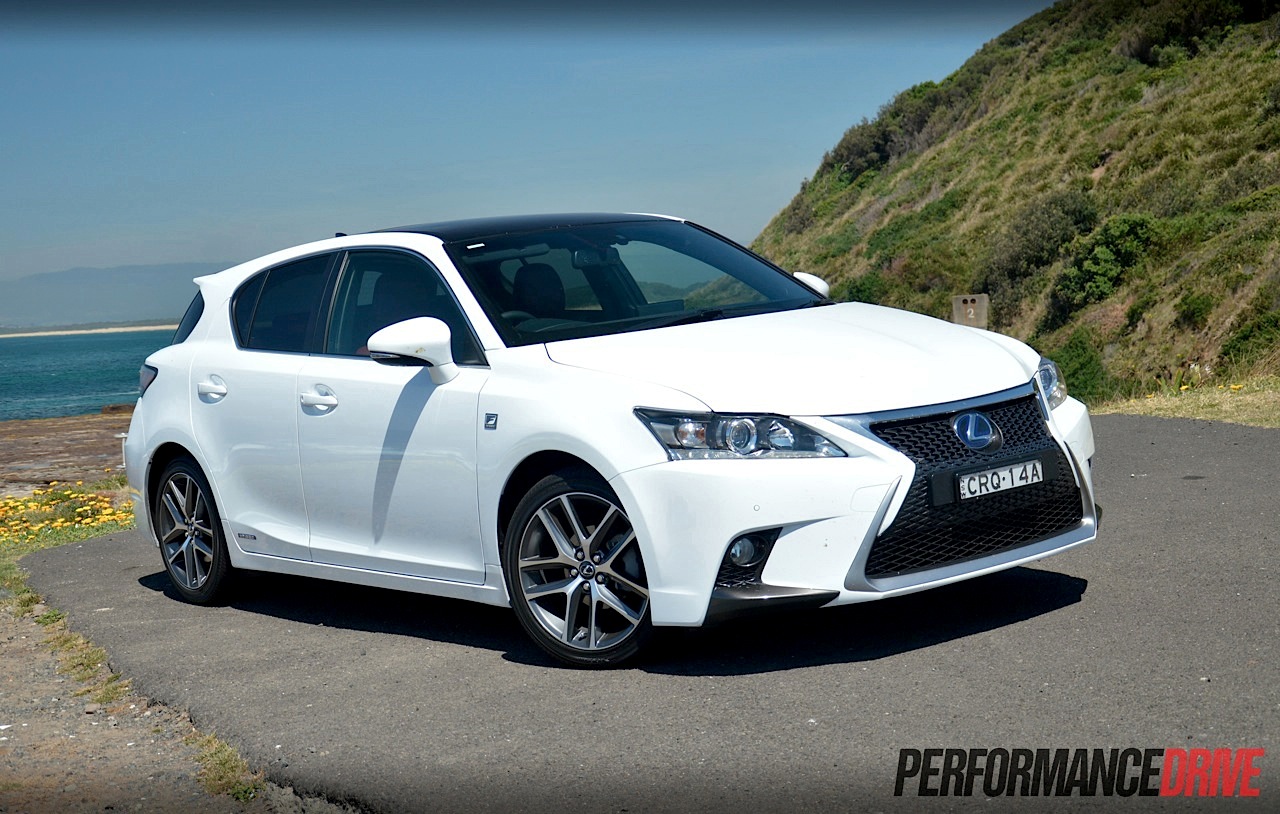 The Lexus CT 200h is perhaps one of the most sensible cars on the market today. But with the striking F Sport pack, can this heedful hybrid pass off as a sporty hatch? 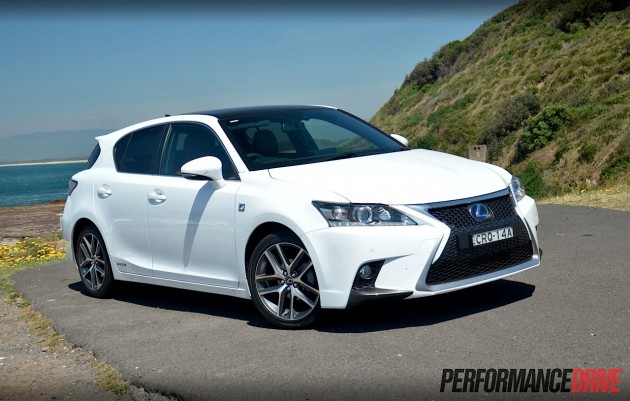 Lexus offers an F Sport package on all of its models now, adding spark and flare to otherwise fairly straight-forward yet intelligent conventions. For the CT 200h, a hybrid based on the Toyota Prius, the F Sport option certainly enhances its street presence.

Aside from the sporty option, the CT 200h recently underwent a mild facelift. You’ll probably notice the large spindle grille layout at the front which is now commonplace with all Lexus models. The interior has also been updated with a new interface, new steering wheel and various controls.

Under the bonnet sits a 1.8-litre naturally aspirated four-cylinder engine paired with an electric motor assist system. Combined output is rated at 100kW. The hybrid setup pushes energy through a continuously variable (CVT) automatic and into a front-wheel drive system. 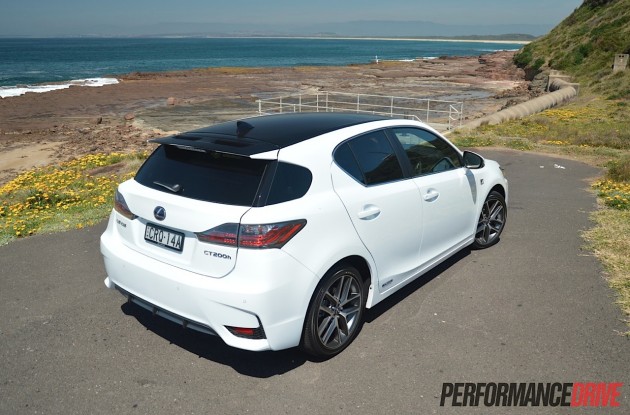 The interior is nothing short of what you’d expect from a modern Lexus. It’s very luxurious and genuinely prestige, with good quality materials used on almost every surface, and a nice flowing dash design splattered with interesting buttons and innovative controls.

New for the 2014/2015 model is an updated interface and controller that Lexus calls the Remote Touch System. The joystick-style navigator can be a bit cumbersome at times, jumping more steps than you require, but overall it’s nice to have a remote stick that you can easily use without needing to reach up to touch the screen. You can adjust the sensitivity of the joystick as well.

For the passengers there are sports seats with decent side bolsters to support you in the corners. Larger people will find the seats a bit tight, and in fact the overall cabin on the smaller side. For petite individuals, there isn’t any issue. Driving enthusiasts will enjoy the hunkered down driving position too.

It’s not the biggest cabin in the segment, and rear seat space is confined compared with a run-of-the-mill premium hatch. Boot space is okay at 375 litres. Due to the electric batteries and gear underneath, the boot floor is high. For singles or those who will use the CT 200h as a second vehicle, the interior space is totally acceptable. You can fold down the rear seats to open up 985 litres if you really need it.

F Sport buyers can select between black leather, or, what we have here, a sexy Dark Rose layout. We don’t mind the Dark Rose red. In the flesh it has a certain wow factor to it, especially when you first approach the cabin. Other standard features include electric adjustable and heated front seats, sat-nav, a rear-view camera, auto wipers and headlights, dual-zone climate, and a 10-speaker stereo with digital radio reception.

Specific to the F Sport, you now get a cool black roof, unique 17-inch alloy wheels and sports suspension (springs and dampers), a larger rear spoiler, a big mesh grille at the front, and more aggressive front and rear bumper bars. There’s also alloy pedals for the driver, a special gear lever and sill plates, and lots of F Sport badges. 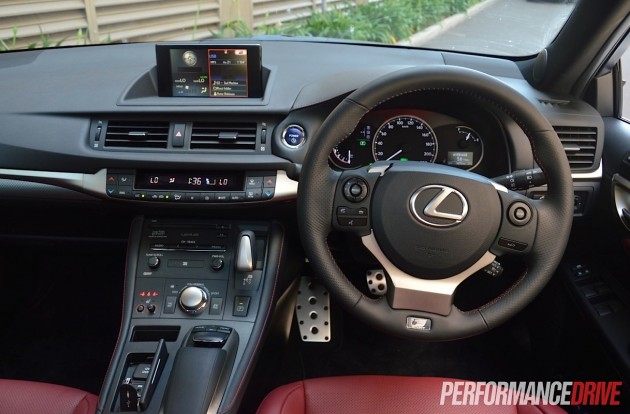 Out on the road the CT 200h F Sport is a typical Lexus in that it feels solid and connected to the road. The steering has ideal weight and the turn-in is sharp and very precise. Ride comfort is firm and sporty, suitably for the F Sport, although it does feel like it could do with more suspension travel.

When you up the tempo and start pushing the limits, the car feels heavy, particularly when you tip it into corners with a bit of speed. The handling and grip is good, with slight push understeer developing in very tight turns. Around long sweepers though it rails around and remains confidently stable and direct.

We’ll try not to sugar-coat its performance, as this is no sports car. The engine combo feels slow and lazy in responding to sudden overtaking moves, and it takes a while to pick up a decent speed. Fortunately, there are a number of driving modes to select from which do make a difference.

In the standard default mode the CT 200h is just plain too slow for our liking. However, in the Sport mode the throttle response is sharpened up and it does surge along with reasonable urgency. At full-throttle off the mark we timed 0-100km/h in a rather dull 10.5 seconds.

The power-to-weight ratio is not too bad, and the power efficiency (power output divided by the official average consumption) is impressive. We think it’s simply the way the power is delivered that makes it feel slow. The upshot of this is you get a super relaxing drive. And after all, isn’t that what Lexus vehicles are all about?

Now to probably the most important aspect of this car. Is it fuel efficient? You bet it is. The official, government-regulated combined cycle rate is 4.1L/100km. In the real world with mixed driving conditions we recorded around 5.6L/100km. We’re sure you could get it down to high-4s during regular commuting and so on. For ultra-economical enthusiasts you can drive the CT 200h in EV mode which uses no petrol at all, but only at car park speeds. 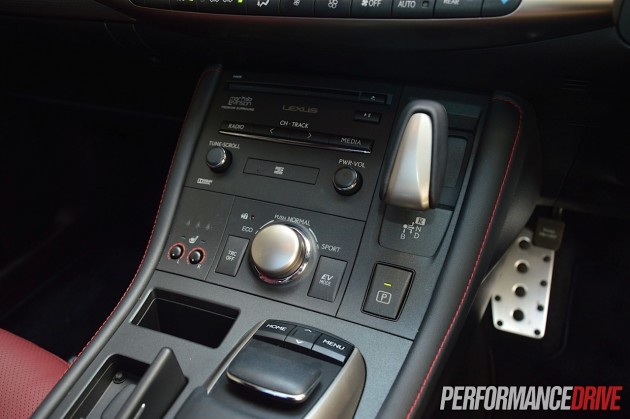 We think the CT 200h is a very safe and solid offering. You get the backing of the biggest car manufacturer in the world, with excellent after-sales service and warranty – that’s if it ever breaks down – and you can enjoy Lexus’s Enform Concierge VIP treatment which includes constant customer assistance and DriveCare, and destination assistance, and a four-year/100,000km warranty.

If you’re in the market for a hot hatch, the CT 200h F Sport will disappoint. If you’re after a smart, sophisticated, extremely well built, and superbly prestigious small car that looks brilliant inside and out, this deserves to be high on your short list. The best part about it, in our opinion, is that you’re getting Toyota Prius technology except you don’t have to live with a Toyota Prius. 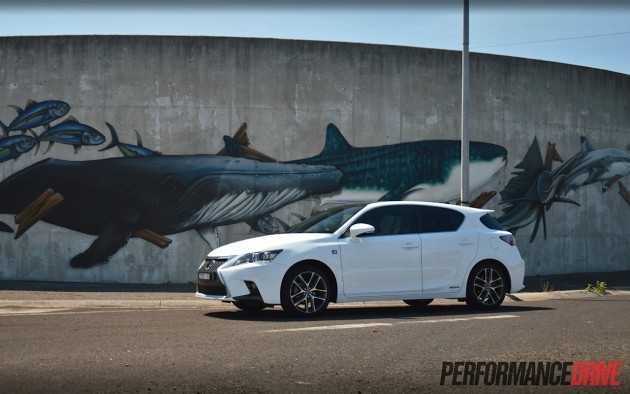