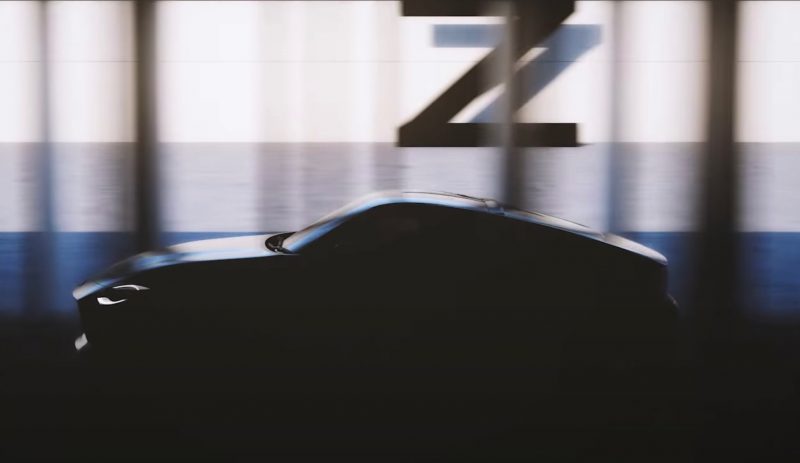 It’s finally official. It’s happening. A new, ‘2022’ Nissan Z car is coming. Nissan has sent out the first proper teaser that actually confirms something is getting near. And the teaser actually gives us a pretty good sneak peek at what it will look like. In a video titled ‘Nissan Next: From A to Z’, the Japanese company shows some shadowy shots of its latest and upcoming models. In the mix of vehicles are some North American trucks, what looks like the new Juke, and the upcoming X-Trail (called Rogue overseas).

However, the most interesting is of course the new Z car. A silhouette clearly outlines a traditional coupe profile. We’ve heard Nissan designers have used the classic 240Z as inspiration for the new model’s design. And just taking a look at this very basic outline the rear end certainly sweeps down just like on the 240Z.

The nose seems to have a pronounced upper lip, like on the 240Z as well, with that traditional long bonnet. What looks to be an integrated spoiler is positioned lower down, leaving a big air intake in the middle. Again, this could be quite similar to the 240Z.

All of this is very exciting, particularly as the 240Z has arguably one of the strongest followings in sports car history. Like Toyota reviving the ‘AE86’ Sprinter, perhaps Nissan is looking to reinvigorate its more illustrious sports car heritage?

No official details accompany the teaser. However, the company does say it is planning to “introduce 12 models in the next 18 months” – 12 models are shown in the video. It also says it will be concentrating on the Japanese, Chinese and North American markets, and aims to expand its presence in EVs, as well as C and D segment vehicles, and sports cars.

There are a heap of rumours around at the moment but, pulling them all together and sifting through the best bits, it seems Nissan will probably call the new model the ‘400Z’ or ‘480Z’. Most of the speculation points to Nissan using its VR30 3.0-litre twin-turbo V6, which currently produces up to 298kW in Infiniti models. We’d also suggest some kind of e-Power might also be on the cards.

More and more teasers of the 2022 Nissan Z car are expected to roll out over the coming months as Nissan will probably want to get everyone really excited about this (as if we aren’t already). Check out the teaser video below to see for yourself.