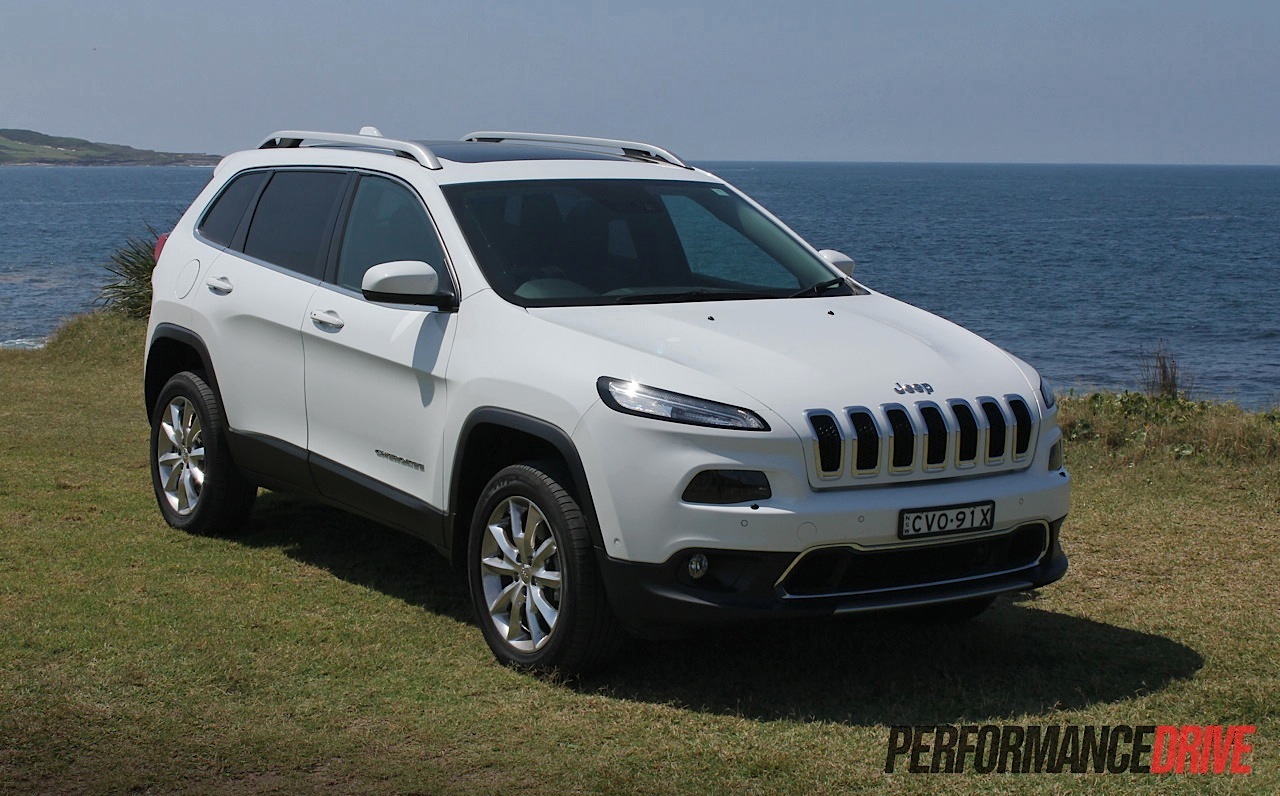 Since its introduction in late 2013, the Jeep Cherokee has managed to start a public discourse and turn heads, mainly due to its controversial styling. Is the 2015 Cherokee Limited Diesel just a pretender? Or can it justify being on the top of the luxury Cherokee lineup? 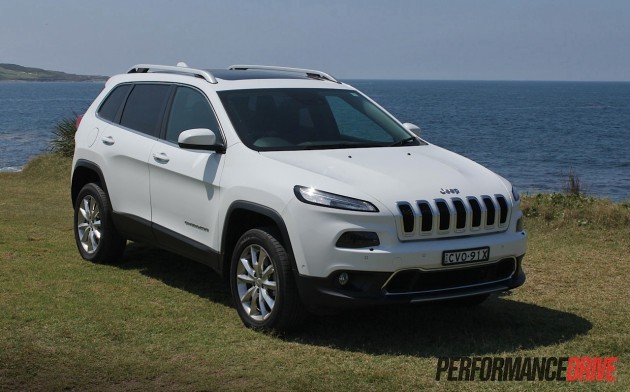 The new diesel engine is only available in the Limited trim level, which is the most luxurious package offered – the flagship off-road-focused Trailhawk is only available with a 3.2-litre V6 petrol. On paper the new diesel sits in nicely with the segment, with a 2.0-litre four-cylinder producing 125kW and 350Nm. It’s matched up to a nine-speed auto like the rest of the range.

Pricing is quite steep but relative for the model grade. The main issue buyers face is the fact you need an extra $5000 for the diesel, with the petrol Limited (same spec-wise) starting at $44,000 and the diesel commanding $49,000 (excluding on-road costs). 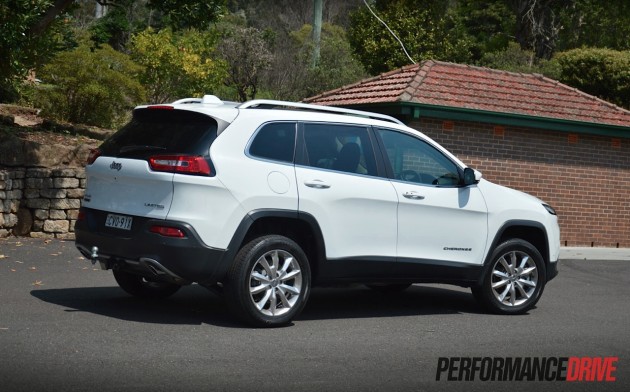 Okay, let’s address the elephant in the room straight up, the styling. While the Cherokee has been styled to look more at home in Sydney’s eastern suburbs, with its splashings of chrome and mascara, this thing can look just as competent out in the bush. If you take a closer look, black scratch-resistant cladding is used for the lower section of the body. There’s also skid sections front and rear.

Some members of the PerformanceDrive team were vocal about Jeep’s styling decisions, stating that it’s a very polarising look. After spending some time with the Cherokee, however, the looks do tend to grow on you. The headlamps give you the impression of some sort of insect that just woke up after a big night out, but that also ensures the Cherokee has a unique and very memorable front profile. The bonnet features a large interpretation of Jeep’s iconic vertical grille, yet there’s also some sophisticated lines making their way down the side profile. All of this is irrelevant though with beauty being a cruel and subjective mistress.

The interior of the Cherokee Limited is absolutely class-shaking. It has all of the things you’d expect for the price, and more. When stepping inside the first thing that strikes you is the sheer amount of gadgets, and the second is how comfortable it is to sit in. The ergonomics of the cabin are outstanding, with big soft leather seats and lots of headroom and legroom in the front.

In the dash is a standard-fitment 8.4-inch Uconnect infotainment system. It is a very intuitive and friendly system to use, with plenty of apps and functions to keep even the savviest of drivers happy. There is also a nine-speaker Alpine sound system which pumps out clear and beefy sounds, an electric tailgate, a full panoramic sunroof, satellite navigation, front and rear parking sensors and a rear-view camera, and 18-inch alloy wheels. There is also a nifty TFT colour display in the instrument cluster, which can show navigation, vehicle settings, tyre pressure, lane warnings, and fuel consumption stats. 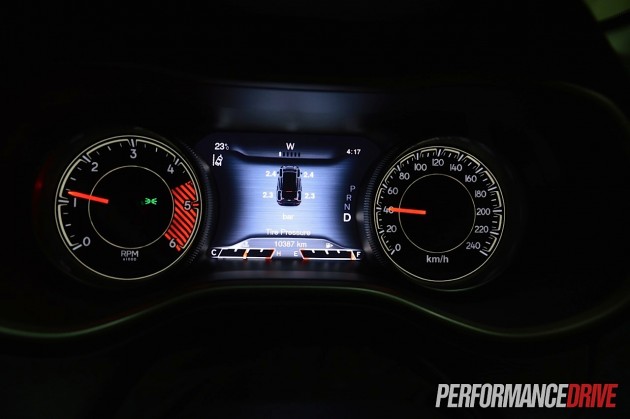 Safety is where the Cherokee also shines, with a five-star ANCAP rating thanks to seven airbags and countless safety features installed. Aside from all the usual acronyms, ABS, ESC and ERM, the Cherokee Limited also comes packaged with Collision Warning-Plus, adaptive cruise control, lane departure warning and blind-spot monitoring. These do indeed come in handy when driving a large car in some urban situations, and Jeep has even thrown in a ‘ParkSense’ system that allows the Cherokee to park itself.

With fairly large and obtrusive B- and C-pillars, visibility isn’t the Cherokee’s strong point, and therefore the rear camera and ParkSense assist system become more of a necessity than a convenience. The parking system works well for parallel and perpendicular parking, but for us it did fail to recognise some obstructions like motorbikes.

In terms of practicality, the Cherokee might not hold up to some of its competitors. While the rear seats are very comfortable, legroom tends to suffer if the passenger or driver is over six foot. Boot space is reduced with the sub-woofer and the large spare wheel sitting below as well. It is a large vehicle and it will eat up the family’s luggage with ease. The cargo space is rated at 412 litres, which is smaller than the current Mitsubishi Outlander (477L) but larger than the Mazda CX-5 (405L). 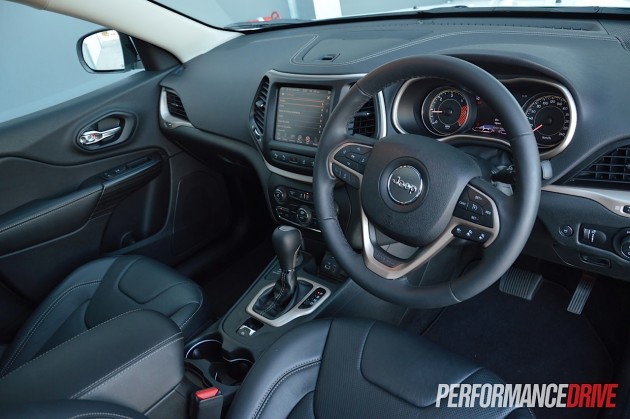 The 2.0-litre diesel engine produces 125kW at 4000rpm, and 350Nm at 1750rpm. This translates to a smooth and linear feeling of acceleration, with loads of torque low down in the power band. The Cherokee diesel, however, won’t be beating anyone off the mark. We timed 0-100km/h in a dawdling 10.7 seconds. This is fairly slow, even for this style of vehicle. We think the engine itself is quite good but it struggles with the Cherokee’s 1854kg tare mass.

Obviously the upshot of going with the diesel is the economy. Or is it? The official government-regulated average consumption is 5.8L/100km. During our week we recorded 8.1L/100km, in mixed conditions. We tried driving out on the highway for some long stints but it wouldn’t go much below that. It is still a lot better than the V6 Limited (10L/100km official, 12.6L/100km during our test).

When you’re not after acceleration – most of the time? – the ride quality of the Cherokee is very impressive. Despite chassis and suspension tweaks to ensure the Cherokee can perform off road, this has not adversely impacted on the comfort levels while cruising around town. As you would expect in a vehicle with the proportions of the Cherokee, there is body roll through the corners. The steering feel is very light, which makes low-speed commuting and parking effortless, but it maintains this synthetic feeling when picking up momentum in the mountains. It’s not as satisfying to drive as some of the rivals, in terms of handling dynamics, but it is one of the most comfortable in regular conditions.

The feather in the Cherokee’s cap really comes from the way it performs when the tarmac stops and the road gets tough. In comparison to its direct competition, the Cherokee can take you places that other mid-sized ‘soft-roaders’ simply can’t. Off road the Cherokee has no problems getting its hands dirty thanks to the Jeep Active Drive II and Selec-Terrain systems. The system allows the driver to select from auto, snow, sport, sand and mud modes.

In normal auto mode, power is distributed 45:55 (front:rear), and in sport 20:80. With 350Nm of torque waiting low down in the rev range, the Cherokee can propel itself up some pretty intimidating ascents thanks to a two-speed power transfer unit with torque management. The sand/mud mode channels more torque to the front wheels, and combines with the low-range setting, which has been calibrated specifically for the 2.0-litre diesel. This enables the Jeep to tackle some impressive tracks. If you’re into boating and towing, Jeep claims the Cherokee has a ‘class-leading’ towing capacity of 2393kg.

The nine-speed transmission works well for most of the time, offering a smooth delivery of power, but it does behave a bit erratically at times. At low speeds and during parking the transmission can be a little clunky, and there are times when the gearbox feels unwilling to upshift. This becomes adverse to the fuel efficiency, with the diesel powertrain unloading the bulk of its power between the 2000 and 3000rpm mark.

There are also some stories circulating around from Cherokee owners that have run into problems with the nine-speed auto. All Cherokee models built before May last year required a software tweak to address this, but at times it feels like the problem is still around. 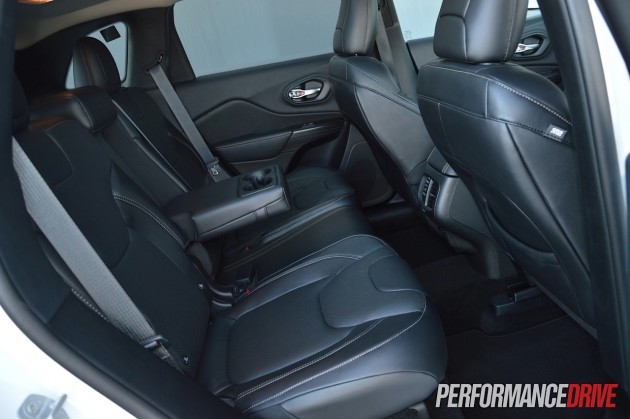 The only real problem is the pricing of this particular model within the Cherokee lineup. This specific version is priced from $49,000. While this seems reasonable because of all the luxuries that Jeep throws in, the Limited Diesel is $5000 more than the equivalent-spec V6 petrol. It’s a bizarre move by Jeep, and may turn some customers to the petrol-powered variants, or even out of the Jeep showroom altogether.

Jeep has in the past years become pretty serious about becoming more of a mainstream manufacturer, and the Cherokee is a quality offering to the SUV market segment. In some aspects like cabin quality, comfort, safety and technology, it’s close to the top of its class. However, there are some niggles that are holding it back from being the best. 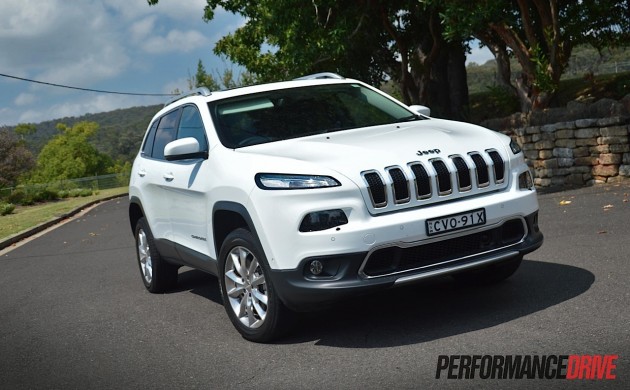