A Lamborghini Gallardo LP 550-2 has been involved in nasty crash in Sydney over the weekend, resulting in two passengers – a 20-year-old male driver and 19-year-old female passenger – being taken to hospital with leg injuries. 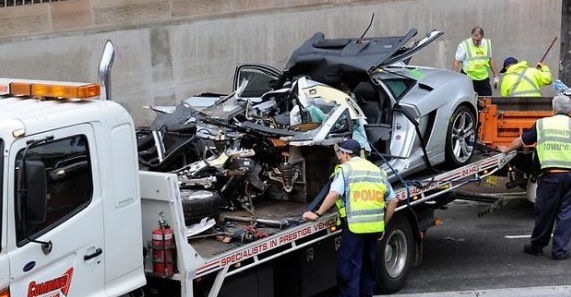 Interestingly, the exotic supercar wasn’t actually being driven by its owner at the time. Instead, Brendon An, a 23-year-old university student, lent his car to his friend Will Shao for a drive.

Shao, of just 20 years of age, not only went for a test drive in the V10 supercar, he also tested out it’s safety levels. Shao lost control of the Gallardo early Saturday morning, crashing with a taxi on Parramatta Road in Camperdown, sending both into a wall.

Shao and his passenger were trapped in the Gallardo for at least an hour before being taken to hospital. Shao is in intensive care with a broken leg, while the female passenger was released from hospital after a few hours. The taxi driver wasn’t seriously injured.

As you can see, the Gallardo is completely written off. The front end suffered serious damage suggesting high speed could have been a contributing factor to the crash. Police are still investigating the incident.