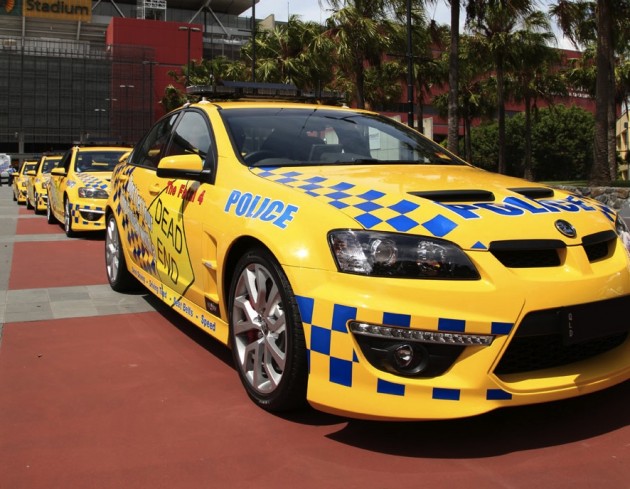 They feature a uniquely and exclusively tuned (for a Clubsport) 6.2-litre V8 engine producing 325kW of power and 550Nm of torque. This is the same output as the current HSV GTS, and is up on the normal Clubsport R8’s figures of 317kW and 550Nm. It does make it the most powerful Clubsport ever made. The Clubsport R8 SV-R editions also feature sports suspension to handle the additional loads and equipment carried around in highway patrol cars.

In most cases, police highway patrol cars consist of Holden Commodore SS vehicles, and not HSV types, although they do feature revisions over the normal civilian production models. These HSV Clubsport R8 SV-R highway patrol cars certainly stand out, and send out an imposing message.

The four of them symbolise the ‘Fatal 4’ message of the Queensland Police, which is made up of: don’t drink and drive, don’t speed, don’t drive when fatigued, and always wear a seatbelt.

“Our engineers worked closely with the Queensland Police Fleet Management Branch to get a clear appreciation of their critical safety and operational requirements. After an extensive period of evaluating their needs, and testing by the Queensland Police, the SV-R is the best possible outcome.

“Safety on the roads is paramount and never more so than at this time of the year. HSV is pleased to be able to play an active role in supporting the Queensland Police’s “Fatal 4” campaign.”

We can’t help but wonder two things; firstly, will HSV be releasing Clubsport R8 SV-R editions to the public? And, how sort after will these police vehicles be after they have retired from services?

The first question can be answered, as HSV has said it won’t be putting these into production. As for the second question, well, what do you think? Will these be collectables in the future?