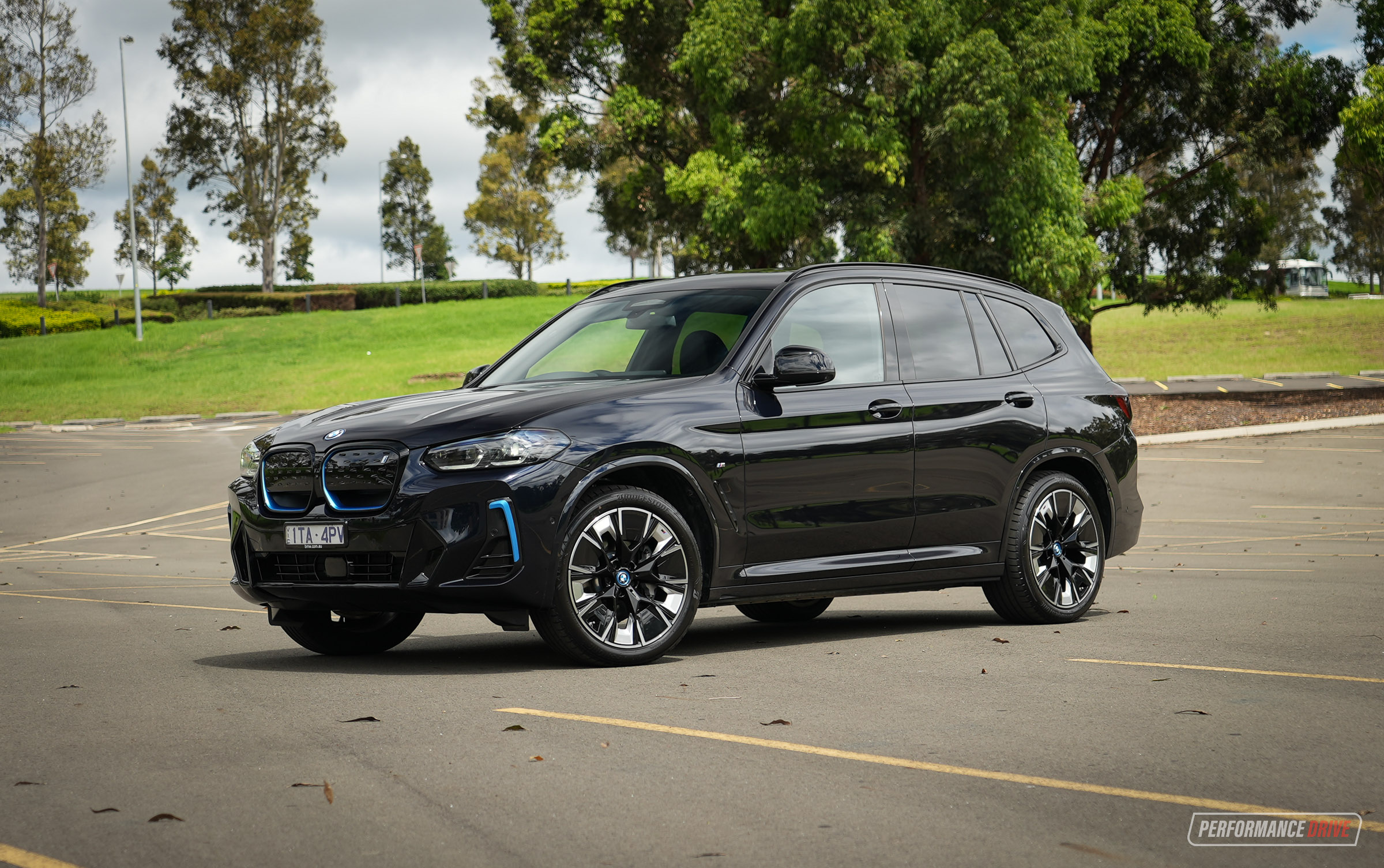 In an automotive world that’s fast becoming electrified, it makes total sense for any carmaker to introduce an electric version of one of its most popular models. As is the case with the BMW iX3. 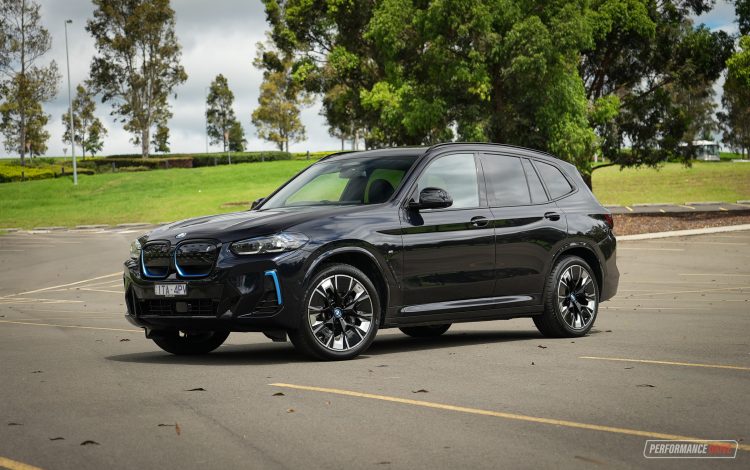 This is, quite simply, a fully electric version of the popular X3 mid-size SUV. You get all the practicality and familiar layout but with a fully electric powertrain. It’s one of three new ‘i’ models from the brand, joining the i4 and iX, and soon-to-be i7 and iX1 in Australia.

Just one trim line is offered Down Under to make things easy for customers. Although, it is available with the Shadow Package (dark exterior highlights) if you desire further exclusivity, for $2000 extra. 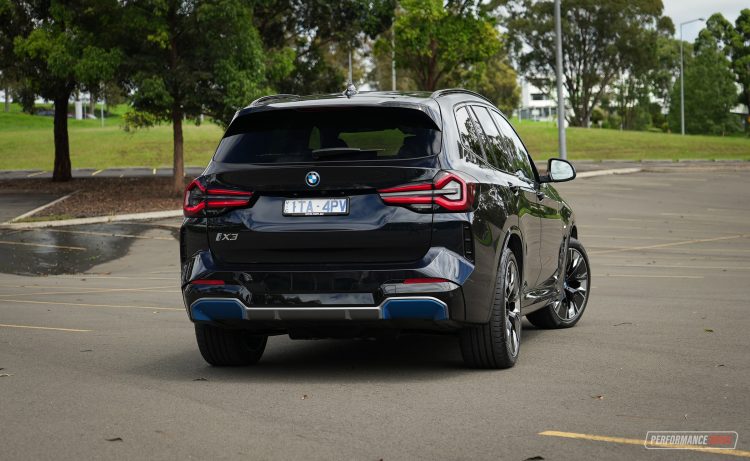 The design looks pretty much the same as the regular X3 but there are a few unique highlights. You’ll probably notice the closed-off front grilles – because there’s no conventional radiator to cool – bespoke front bumper bar with blue trim details, and a revised rear bumper bar and diffuser with no exhaust outlets. Despite seeming like it has a more serious concentration on aerodynamics, the iX3 shares the same drag coefficient rating of 0.29 as the regular X3.

Underneath the body is the same CLAR platform as the regular model as well, but here it comes in rear-wheel drive form only with a single electric motor mounted at the rear axle. The iX3 sits a bit lower to the ground than the X3, offering a clearance of 179mm compared with 204mm in the X3 with the M Sport pack. However, like with most rivals in this class, customers aren’t likely to have big expectations for off-road performance here.

We love these special aero-style 20-inch alloy wheels featuring a surprisingly aggressive black inner spoke design. They’re wrapped in staggered-width Bridgestone Alenza tyres, with 245/45s on the front and 275/40s on the back. 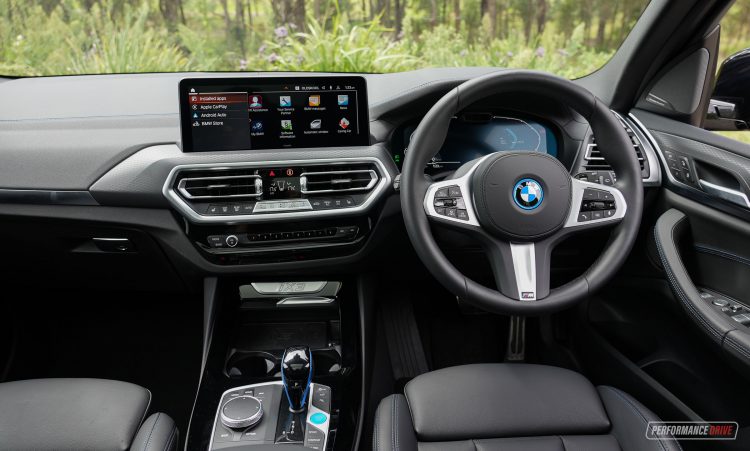 Inside, it looks exactly like the regular X3. Which is great, as the interior is both very practical for its class and luxurious, with excellent build quality and liberal use of premium materials in all of the important areas. Most controls are ergonomically positioned, with a nice big touch-screen atop the dash and separate button controls for the climate settings across the middle. It’s always comforting to see these presented on a separate panel we think, as it is much more convenient than having to dive into the main screen just to change the temp.

Also helping with convenience, the menus within the media interface are navigated with simple two-axis operation, with pages flipping side-to-side and functions accessible by scrolling up and down. A nice touch is how the system remembers your last-visited areas. For example, if you’re adjusting elements in the vehicle settings page, it will remember that and take you straight there next time you start from the home page. 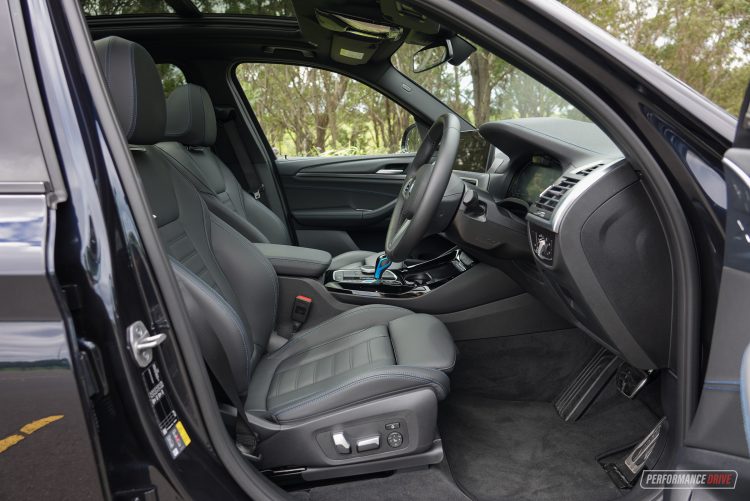 Thoughtful, yes. Common, no. Many touch-screens fitted to cars, even spanking new models, still do not have this rather simple level of intelligence. Pre-loading selections like this can help to reduce your time spent looking at the screen, aiding safety.

As for features, a wireless phone charger comes as standard, a 16-speaker sound system, internet connectivity via SIM, digital gauge cluster, electric sunroof, along with sporty seats in the front that are very similar – if not identical – to the M Sport items in any X3 with the M Sport pack fitted. The front seats offer excellent support and, along with the steering column, a wide range of adjustment so you can find a natural driving position pretty quickly. 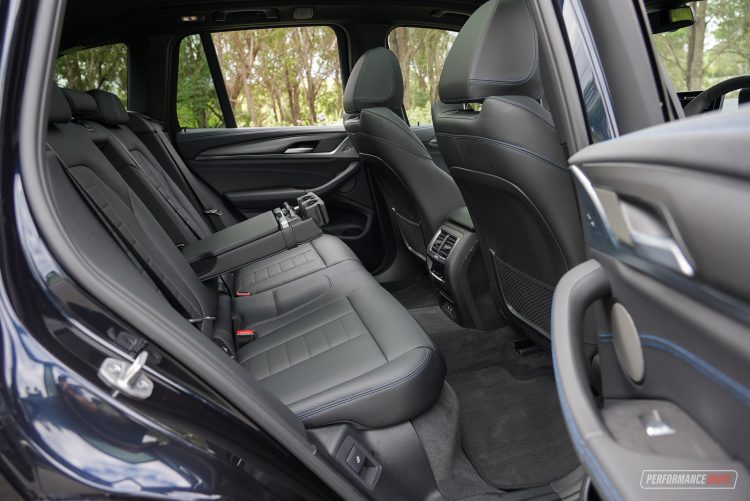 Passenger space is near the top of the segment in our opinion, partly thanks to the X3’s tall and upright cabin orientation. It kind of goes against the grain in that sense, with many new SUVs now going for a coupe-like trend. Wide-opening doors also help.

Likewise, rear seat space is quite decent and practical. You get big bottle holders in the doors, climate control and vents, and charging ports. The transmission tunnel in the middle is lower than it is in some rivals too, helping with middle seat legroom. Overall, you could use the iX3 as a regular family vehicle and receive little complaint from members on-board.

Up at the back the boot space drops from 550 litres to 510L compared with the X3. It’s still a very useable space though, and again the highish ceiling helps maximise the space. There is some handy under-floor storage which is great for the charging cables or other nicknacks. 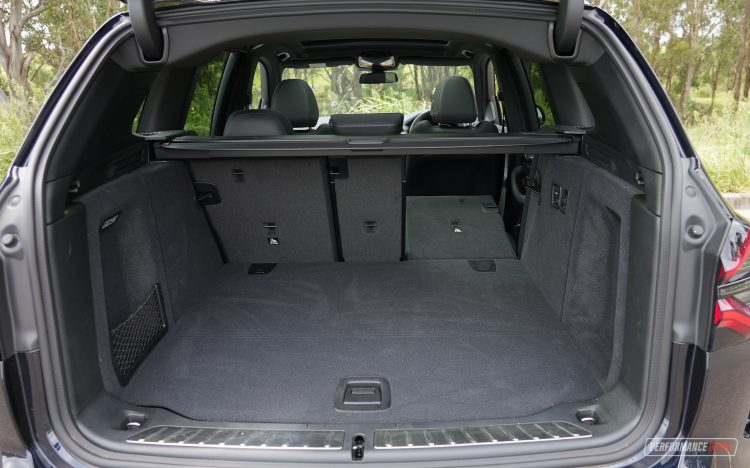 Under the bonnet you’ll find a big plastic cover. But underneath that is some of the electrical components for the drive and steering systems, and similar strut tower bracing as the regular X3 to bolster rigidity and handling. Most of the import stuff is under the body. Because that’s where you’ll find an 80kWh battery, under the floor, providing a WLTP-rated range of 460km. It feeds a rear-axle e-motor that generates 210kW and 400Nm.

Charging can be done via either a Type 2 or CCS2 socket, handily, and it can soak up to 150kW of power at an ultra-rapid charging station. Unfortunately, there aren’t many of these publicly available in Australia at the moment. Chargefox has a couple in Sydney and a couple more down in the Illawarra region in Shell Cove. These do cost money to use. 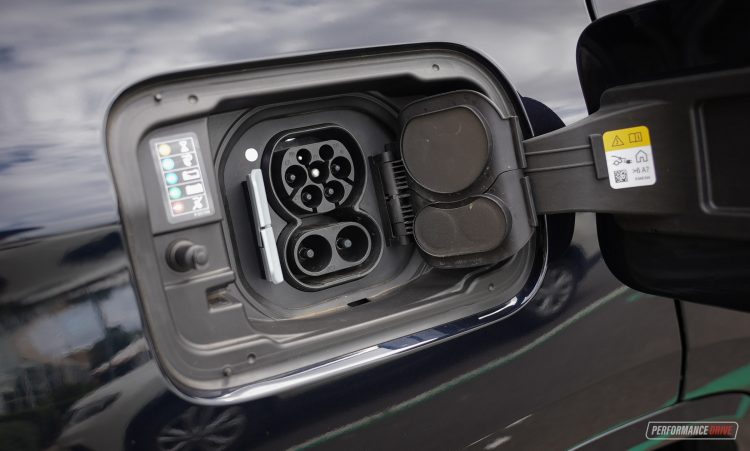 BMW does offer a wallbox setup that you can have installed at home. This is our recommendation, rather than depend on the public infrastructure. It can take the battery from near-empty to full overnight. Since your daily errands or commute is likely to be a lot less than 460km, you won’t be charging the full range every night but rather topping up what you used that day. This’ll ensure you have plenty of range every morning to take on whatever the day throws at you. 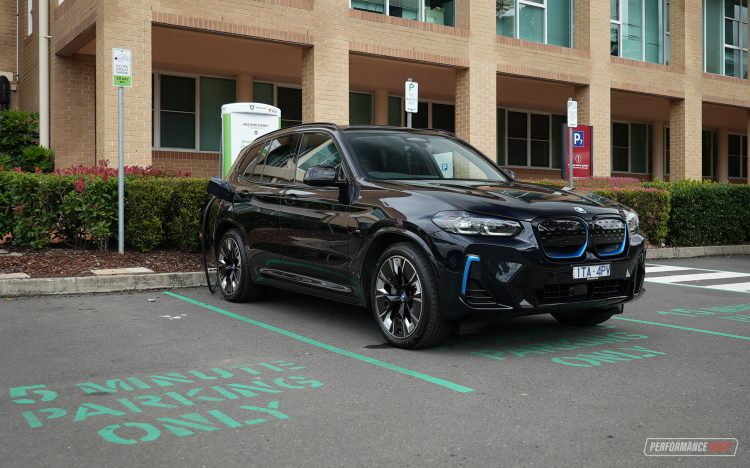 Out on the road you get BMW’s superb steering feel, especially for this class, and the body control and overall handling feels really good. With rear-wheel drive it can seem slightly more engaging than the AWD X3s as well. However, weighing it at almost 2.2 tonnes, this is around 400kg heavier than the petrol counterpart. Fortunately, you don’t really notice the added weight unless you’re pushing fairly hard around bends, particularly in tighter switchbacks, jumping from left to right.

In between corners, BMW claims 0-100km/h in 6.8 seconds. However, we clocked it in 6.42 seconds using a pretty ordinary strip of tarmac on a private road and with the battery level at around 85 per cent. The acceleration feel is quite brisk, but the top-end speed tends to drop away compared with an equivalent petrol model, like in most EVs. 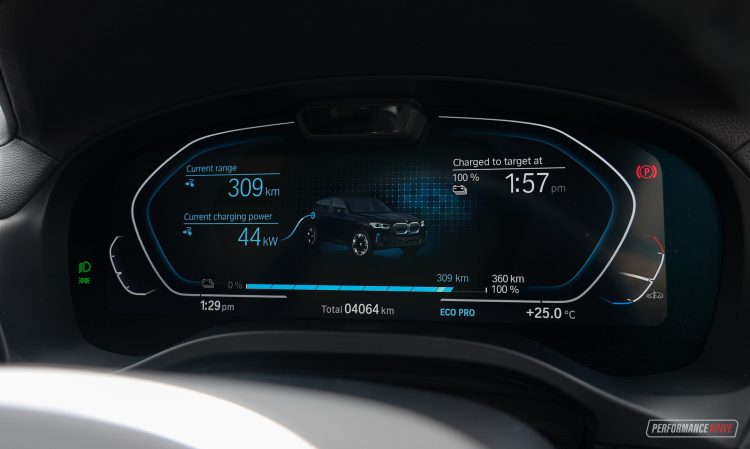 Whatever sprint time you look at, this is not the quickest in the X3 range. Is that a concern? Well, it depends on your stance. On one hand it is very common for electric vehicles to be very quick naturally and without much effort. So there is a level of expectation here.

But on the other hand this never set out to be or promised to be a performance model. After all, 210kW and 400Nm is fairly modest. Even against the regular X3 range. The X3 xDrive30i is perhaps the closest spec rival, which features a 2.0-litre turbo-petrol four-cylinder that develops 185kW and 350Nm. BMW claims 0-100km/h in 6.3 seconds and a theoretical average range of 823km (based on the official consumption of 7.9L/100km and a 65L fuel tank). 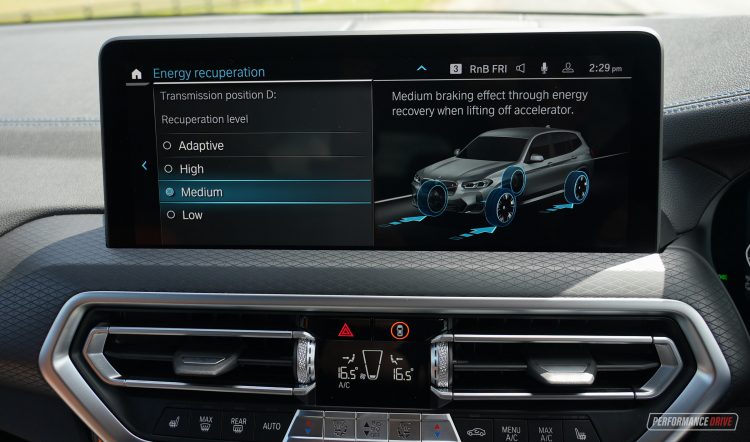 Based on that (which is not exactly a real-world indication, we know), you would need to complete 213 full tank cycles to meet the additional starting price of the iX3. To put it another way, the starting price difference between the two would not even out until you reached about 175,000km in the iX3; that’s 213 tanks (about $32,000) multiplied by 823km each fill in the 30i. And that does not account for the cost of recharging the iX3.

The cost-to-benefit ratio doesn’t really add up. Not in Australia anyway. But in the iX3 you are future-proofing your personal and family transport. If petrol prices continue to rise it’ll also sway more in favour of the EV.

Overall, we like the iX3 mostly because it perpetuates BMW’s fantastic driving expertise and rolls it up into a very practical and everyday-liveable package. We love the thoughtful placement for the driving controls and the spot-on driving position as well. 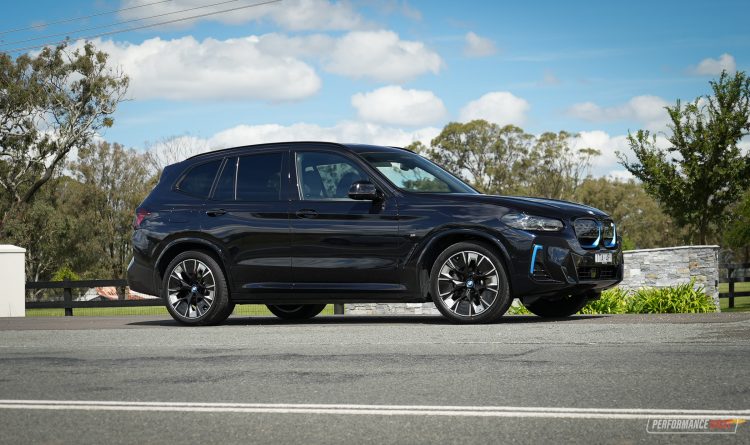 While electric vehicles are no doubt a growing technology and Australia’s lacking infrastructure continues to concern and even frustrate us, the iX3 is a competent and appropriate eco-conscious alternative to the sound X3 range. We can’t understand the bogus price premium over the regular models, but this isn’t an isolated case. Most EVs are unreasonably dearer than their fuel-powered counterparts at the moment.

Compared with its nearest rivals the iX3 boasts properly engaging driving dynamics so it’s actually fun and entertaining to drive, while practicality and overall ease of use is at the top of the class in our opinion.