Anyone who remembers the crazy Group B rally days will recognise this beastly 1986 Ford RS200 Evolution up for sale. Yes, here’s your chance to own a slice of Group B awesomeness. 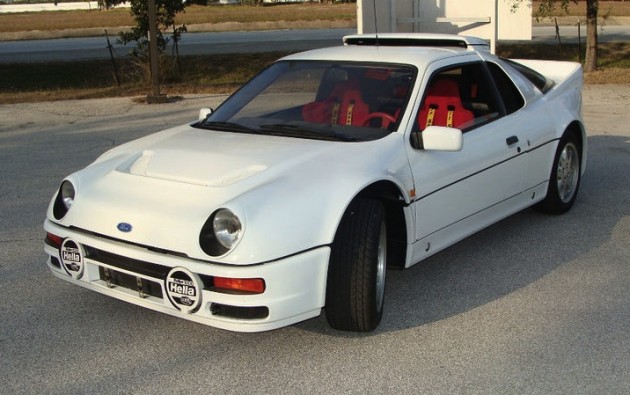 The Ford RS200 was originally built by Ford in Europe for the sole purpose of passing homologation rules which allowed it to race in the Group B rally championship. Before manufacturers could compete in the series, they had to release at least a limit number of their race cars for the road.

Although the road cars weren’t exactly identical to the race versions, in terms of specifications, some limited edition models were still brutal compared with other more mainstream cars of the day, even the hottest of supercars. Some included the Peugeot 205 T16 Turbo, the screaming five-cylinder Audi Quattro Sport and the Lancia Delta Integrale.

This 1986 Ford RS200 Evolution is one of those epic Eighties specials. Ford made just 200 Ford RS200 road cars, and of them, 24 were even more juicy ‘Evolution’ models. These were even quicker and packed with more race-ready features.

In standard trim, the Ford RS200 comes with a 1.8-litre turbocharged four-cylinder engine with 190kW of power. It may not sound like much but the Rs200 only weighs 1050kg. In Ford RS200 Evolution specification, engine capacity is bumped up to 2.1 litres, offering between 410kW of power and a whopping 608kW, depending on the tune.

Unfortunately, the ad the says RS200 cannot be registered for street use – at least for certain states – but it would make an incredibly quick track day car. It features all of the track or rally ready components one could possibly need, including racing suspension, buckets seats and a completely flat and protected underbody.

Head over to the eBay for more information or to make your bid. The auction ends early Tuesday morning.