In 2009, FBI agents in the US took a stolen and recovered Ferrari F50 no less, for a bit of a joy ride only to crash it into a hedge. The expense of the damages was left to Motor Insurance insurance company, but the company wasn’t interested in covering the costs, so it attempted to sue the Department of Justice. It has since failed. 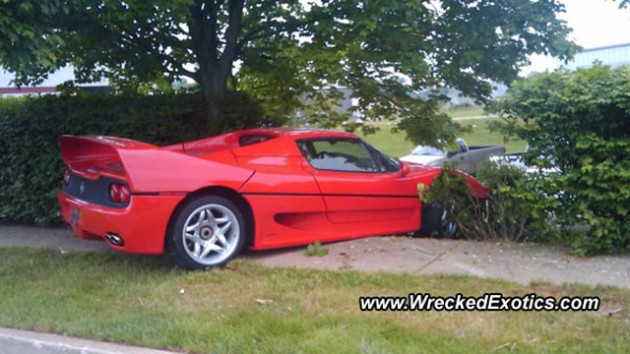 Lesson to be learned: Don’t let the FBI drive your supercar. There was nothing the owner of this Ferrari F50 could do however, as it was stolen and authorities were keeping it for evidence. The FBI agent in question, Fred Kingston, was in the process of transporting the Ferrari F50 at the time of the crash.

In court, The Chicago Tribune reports, Motor Insurance argued that the Ferrari F50 wasn’t actually in custody of the FBI during the time of the crash, Motor Insurance says it had given permission to authorities to keep it for evidence.

The representatives of the FBI on the other hand, said that it did have possession, with the US District Court Judge Avern Cohn saying yesterday that the FBI had the right control and preserve relevant evidence.

As of yesterday, the judge dismissed the matter while Motor Insurance has had to payout the original owner $750,000 for the damages. Talk about hard luck and the power of the FBI.