In a revelation almost identical to Volkswagen’s disastrous dieselgate scandal, America’s Environmental Protection Agency (EPA) is asserting that FCA was “installing and failing to disclose engine management” on more than 100,000 of its vehicles that allowed it to be sold in the U.S., despite the fact it didn’t meet federal environmental regulations. The EPA is working alongside the California Air Resources Board (CARB), who has also issued FCA with a notice of violation. Failing to disclose the existence of auxiliary emission control devices to regulators is deemed a direct violation of the U.S. Clean Air Act.

The EPA and CARB allege that 104,000 vehicles have had the system installed, including Jeep Grand Cherokee models produced between 2014-2016, and Dodge Ram 1500 trucks fitted with 3.0-litre diesel powertrains. While regulators haven’t gone as far as deeming them ‘defeat devices’, yet.

“Failing to disclose software that affects emissions in a vehicle’s engine is a serious violation of the law, which can result in harmful pollution in the air we breathe,” said Cynthia Giles, assistant administrator for EPA’s Office of Enforcement and Compliance Assurance. “We continue to investigate the nature and impact of these devices. All automakers must play by the same rules, and we will continue to hold companies accountable that gain an unfair and illegal competitive advantage.”

“Once again, a major automaker made the business decision to skirt the rules and got caught,” said CARB chair Mary D. Nichols. “CARB and U.S. EPA made a commitment to enhanced testing as the Volkswagen case developed, and this is a result of that collaboration.”

Fiat Chrysler Sergio Marchionne has responded to allegations with rigor, stating outright that, “There’s not a guy” at FCA “who would try something as stupid” as cheating on emissions tests, he told reporters.

“We don’t belong to a class of criminals,” Marchionne said. “Our sin, if we did commit one, is the most benign in nature.” 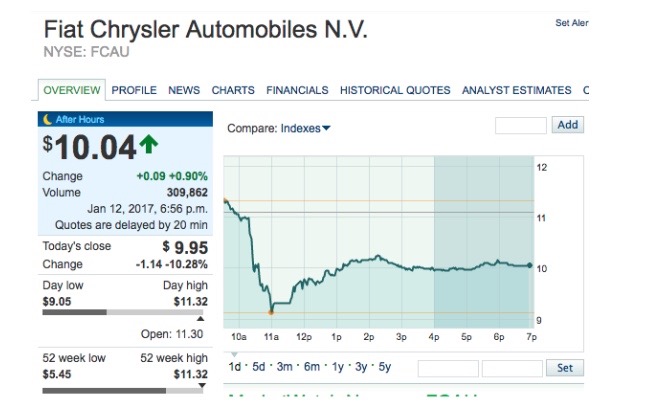 Benign, perhaps, regardless, the news sent FCA’s share price south, with investors scared of a possible fines worth billions of dollars, similar to what Volkswagen has suffered in recent months. Fiat Chrysler Automobiles has since responded to accusations with the following statement:

“FCA US is disappointed that the EPA has chosen to issue a notice of violation with respect to the emissions control technology employed in the company’s 2014-16 model year light duty 3.0-litre diesel engines. FCA US intends to work with the incoming administration to present its case and resolve this matter fairly and equitably and to assure the EPA and FCA US customers that the company’s diesel-powered vehicles meet all applicable regulatory requirements.

“FCA US has spent months providing voluminous information in response to requests from EPA and other governmental authorities and has sought to explain its emissions control technology to EPA representatives. FCA US has proposed a number of actions to address EPA’s concerns, including developing extensive software changes to our emissions control strategies that could be implemented in these vehicles immediately to further improve emissions performance.

“FCA US looks forward to the opportunity to meet with the EPA’s enforcement division and representatives of the new administration to demonstrate that FCA US’s emissions control strategies are properly justified and thus are not “defeat devices” under applicable regulations and to resolve this matter expeditiously.”