TeamVodefone Holden V8 Supercar driver Craig Lowndes has hit the newly refurbished Easter Creek Raceway, now called the Sydney Motorsport Park, for the very first time to test it out. The circuit is getting ready for round nine of the 2012 V8 Supercars series, taking place next month. 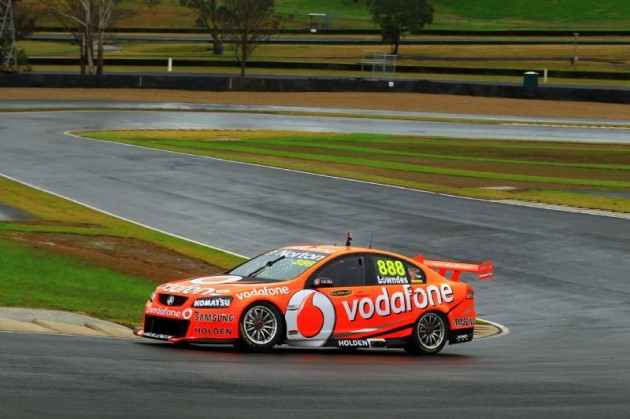 Lowndes took full advantage of the long version of the track, now 4.5km, by getting in a few drifting slides in the wet conditions. The circuit features new elevations, hairpins, and blind crests. Lowndes was understandably excited about test driving the circuit. He said,

“The new section is fantastic. It’s a technical part of the track, and a great inclusion for the circuit,” said Lowndes.

“Everyone is used to the fast, flowing section of turn one into turn two, but now to have that added extra, with blind corners, crests, and then down into that fairly tight hairpin.

“I can see a fair bit of overtaking going on into there, especially in the V8s and that’s something the spectators want to be able to see. The better viewing areas for the spectators are fantastic.

“The only disappointing thing for me is that this year we’re not going to use it, so hopefully in the future we’ll be able to get to that section of the racetrack.”

Round nine of the V8 Supercar series is set to be a big one. Called the ‘Sydney Motorsport Park 360’, the event will run over the weekend of August 25 and 26.