As much as we hate to report things like this, a Lamborghini Gallardo supercar has caught fire in Scotland over the weekend, causing devastating damage to the car. 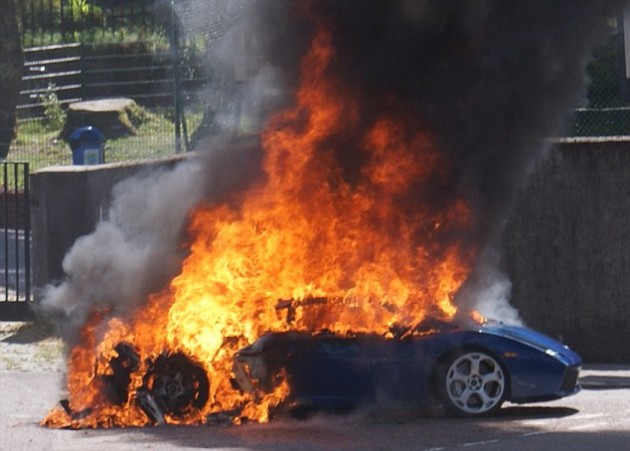 The 40-something owner of the Gallardo was taking his pride and joy for a drive through the Scottish Highlands only to smell the scent of burning rubber – and not the kind you might think.

The owner then reportedly pulled over just outside Fort William hospital only to notice a small fire had started brewing towards the rear of the car. He then ran inside the hospital to get an extinguisher, but it was too late.

Fire departments were called to the scene and rushed over, apparently they were stationed just around the corner. They did eventually extinguish the fire only to leave a crispy wreck reminiscent of crusty toast.

A worker from a nearby BP service station said in a recent Daily Mail report,

“I asked him how his day had gone when he said his car had burst into flames. I couldn’t believe it when he told me it was a Lamborghini. He was very calm about it.”

Meanwhile, a fire emergency worker on the scene said,

“The thing is just knackered now. There’s nothing left of it. It’s a real shame to see such a beautiful car in that condition, but sometimes these things just happen.”

It’s remarkable to see these cars go up in flames and be reduced to almost nothing in such a short time. If your supercar ever catches fire, be sure to get out of harms way first, and then tackle the fire.