Audi has inadvertently confirmed it is building an Audi RS1; a super hot hatch version of the new Audi A1. Various spy photographers from around the world have spotted an early prototype being flung around the Nurburgring in Germany. 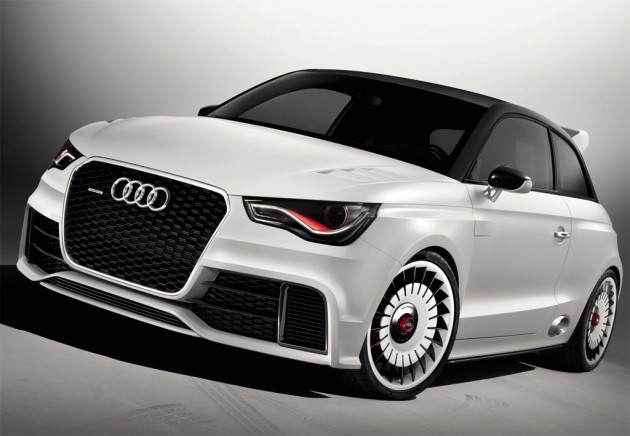 Like other Audi ‘RS’ models, the Audi RS1 will feature various performance-oriented enhancements over the normal Audi A1 model. These will range from a performance bodykit with active front and rear spoilers and side skirts, similar to the Audi clubsport quattro Concept (pictured) – although slightly dimmed down. The Audi RS1 will also come with sporty alloy wheels and a serious-looking front end.

As for the mechanical hardware, the Audi RS1 will get an uprated suspension system and will likely feature a six-speed manual gearbox with an optional seven-speed S tronic DSG dual-clutch transmission. The Audi RS1 will also come with Audi’s quattro all-wheel drive system, which could help it become one of, if not the quickest hot hatch around.

As for the powerplant, various reports say the Audi RS1 will come with the awesome 2.5-litre turbocharged five-cylinder engine borrowed from the Audi TT RS and Audi RS 3. However, power figures are thought to be detuned somewhat compared with the 250kW on offer in the mentioned models. A figure of around 200-210kW is more likely.

Even though it will be detuned – if the engine does end up powering the Audi RS1, another engine candidate is the 2.0-litre engine also seen in the Volkswagen Golf R – acceleration from 0-100km/h is still expected to come up in around 5.0 seconds. Top speed will likely be limited to the German 250km/h agreement.

Audi is yet to release official on-sale dates, however, the Audi RS1 unveiling is slated to take place at the 2012 Geneva Motor Show in March. Stay tuned for more information, as this little pocket rocket is sure to be a cracker.

Or, for information on models available in Australia right now, head over to the official Audi website.

(images are of the Audi A1 clubsport quattro Concept)