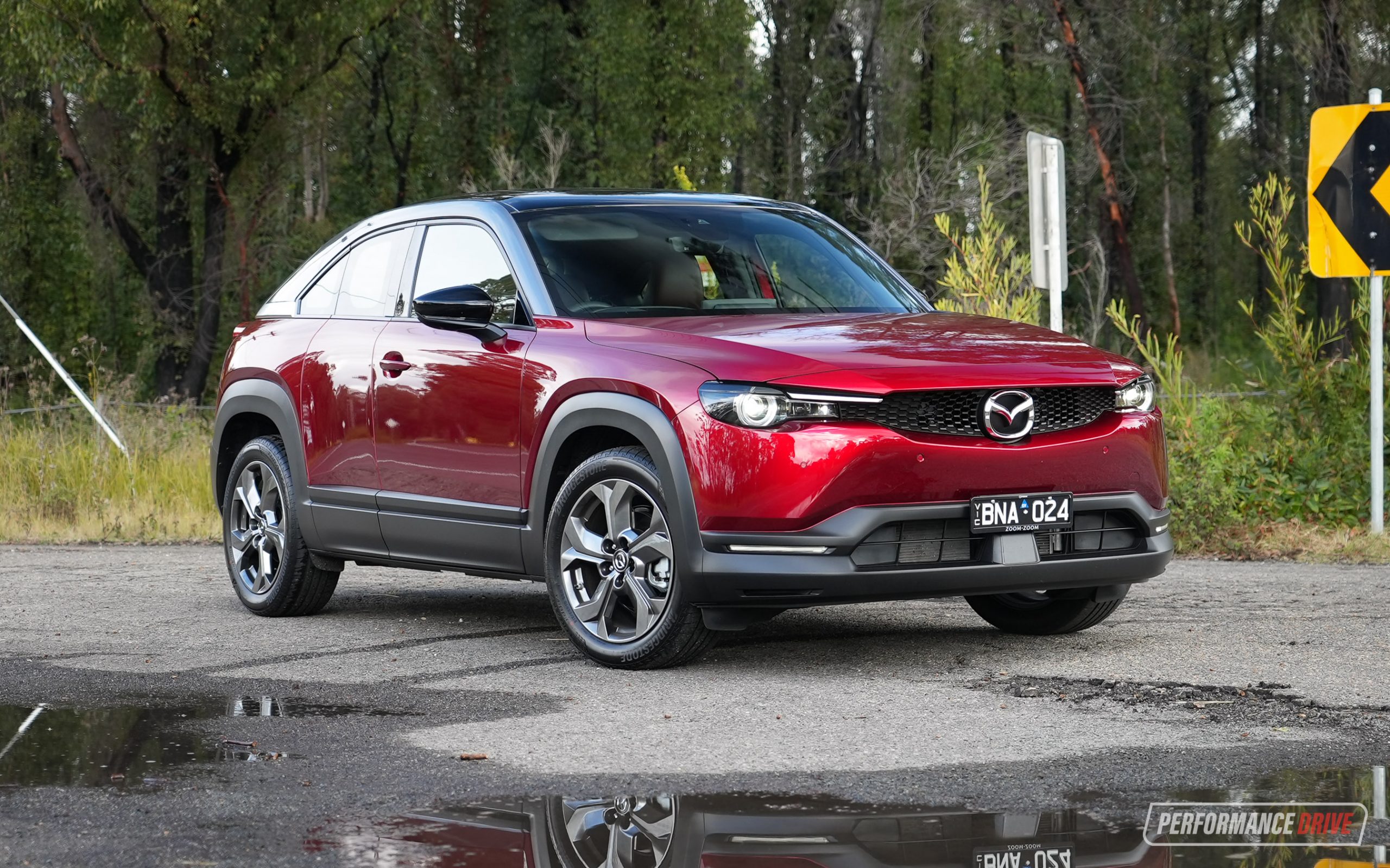 Aside from cars that can rail around corners and compress your organs with huge longitudinal g-force, we also love cars that are interesting. The new Mazda MX-30 falls into that latter category; it is very interesting. But is that a good enough reason to buy one? Let’s take a look. 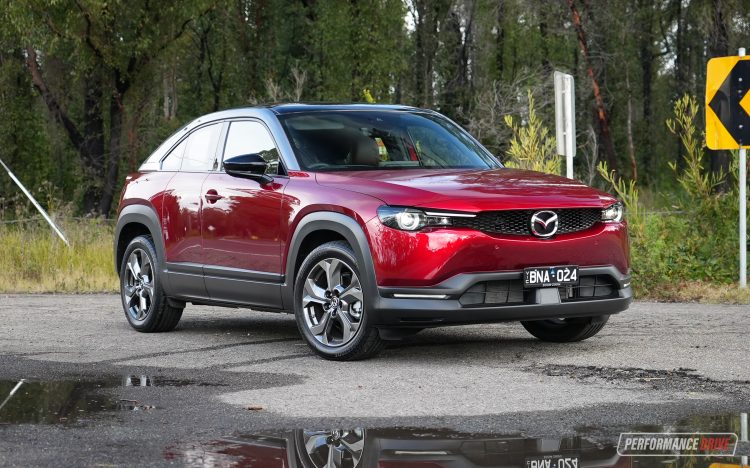 This is… actually, it’s difficult to describe what this is. Formally, it fits into the crowded and increasingly-popular small SUV market segment, competing with the likes of the Hyundai Kona, Kia Seltos, and Toyota C-HR. So we guess that means it’s an SUV. However, take a closer look and you’ll see it has the side profile of a coupe, and the reverse-hinged rear doors of a hotrod. It’s basically Mazda’s new look-at-me-I’m-an-eco-car concept, spring-boarding itself into the world of electrified vehicles.

You can get it with a fully electric powertrain – the first fully electric Mazda production vehicle on sale – and you can get it with a mild hybrid petrol. All are front-wheel drive. In Australia Mazda decided to first launch the mild hybrid petrol option, known as the M Hybrid G20e. That’s what we’re looking at here. Three trim levels are available as well, running through the Evolve, Touring, and top Astina. 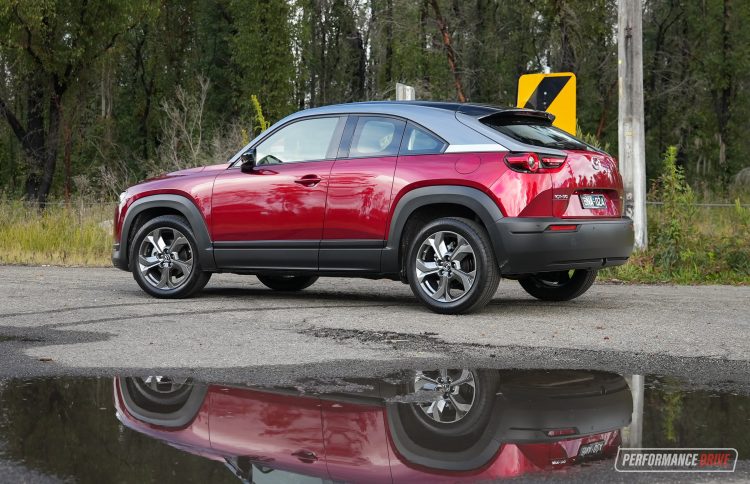 It’s difficult to describe the exterior. We like the finer attention to detail around some areas, such as the headlights and taillights, and the clamshell-style nose. The contrast gunmetal grey D-pillar and black roof are also a nice touch in our opinion, helping to provide more depth and sportiness. Overall, it’s definitely interesting and provokes thought. So for that alone we guess Mazda deserves credit.

Coinciding with the funky exterior, this interior is a real treat. We love the cascading centre console, with cork for the shelving surfaces and cute little flip-lid cup holders. And as usual with modern Mazdas, the build quality in here is fantastic. Almost everything has a premium feel to it. The driving position is also really nice. 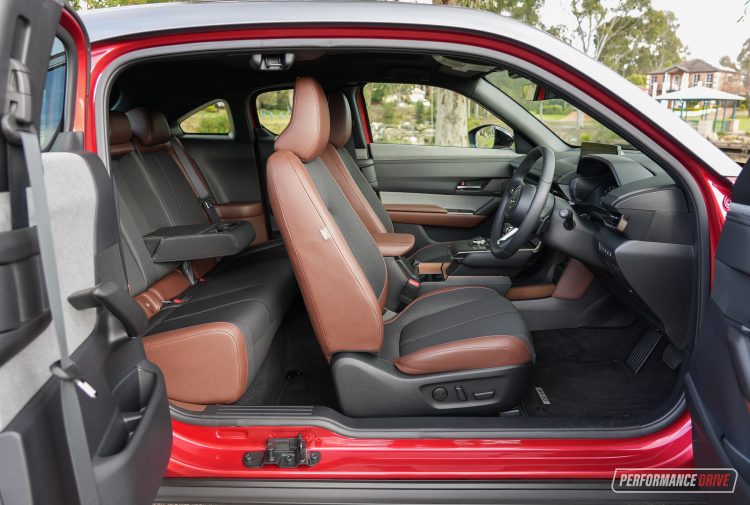 Accessing the rear seat is made easy thanks to those reverse-swinging half doors. We’re not sure about them. On one hand, it is more practical than a two-door coupe and they are a conversation starter. But on the other hand, they can be annoying because you first have to open the front door before you can open the back. It’s a lot like a coupe in that regard.

Passenger space in the back isn’t too bad, once you’re in. We stuffed around a bit with a forward-facing baby seat, slotting a 3yo through. There are only two tiny side windows too, which probably won’t go down well for some people during longer trips. However, plenty of rivals in this space aren’t much better. 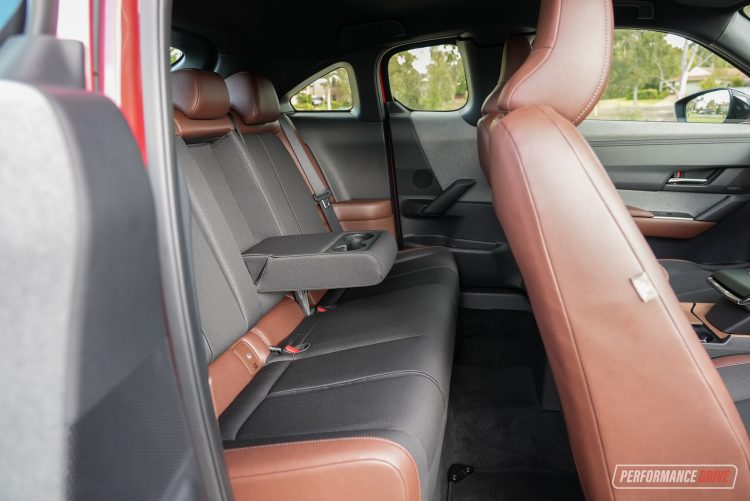 Boot space isn’t all that great either, mainly due to a high floor. That’s because there is a space-saver spare wheel underneath, and a portion of the sound system. Some rivals do offer more volume if that’s high on your priority, but, aesthetically, such vehicles often showcase a pretty conventional and ordinary exterior design. So we guess it all depends on what you want more.

Going for the top Astina variant brings in a brim-load of standard gear. This brown and black interior (called Vintage Brown Maztex) theme is ravishing and really pushes it close to higher-end premium models, and there’s a sunroof with tilt and slide opening.

The rest of the gear included mainly focuses around safety and convenience; surround-view parking cameras, front cross-traffic alert (rear is standard), adaptive LED headlights, and adaptive cruise and traffic support. Most of this stuff is available on the Evolve and Touring through the $1500 Vision Technology pack. 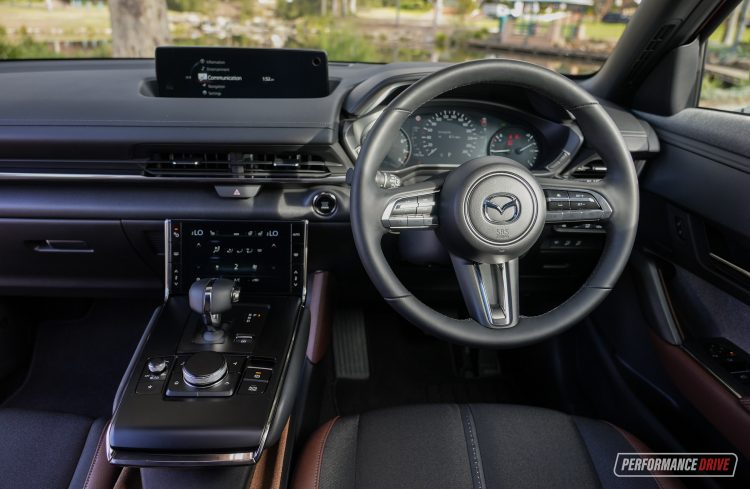 The 2.0-litre G20e powertrain incorporates a 24-volt starter generator. Essentially, there is no starter motor in the traditional sense. Instead, it uses a belt-driven electric motor system integrated within the engine and transmission line. Since it regenerates energy, it also takes away the need for an alternator. Power regenerated during braking and deceleration is captured and stored in the 24V system. This energy is then used to spin the petrol engine back into life, seamlessly, during the stop-start function, and it can assist in spinning the crankshaft during driving. Overall output is rated at 114kW and 200Nm.

Despite this clever tech, which is now becoming very common in modern combustion engines, fuel economy is not what we’d call impressive or out of the ordinary for this class. The official average is 6.4L/100km. For reference, the 148kW Hyundai Kona 1.6T (AWD only) has an official average of 6.9L/100km, while for proper economy, the Toyota C-HR Koba hybrid (FWD only) is rated at just 4.3L/100km.

What perplexes us is that, yes, the Toyota is very slow and only produces 90kW, but at least it sips fuel. Meanwhile the Hyundai is very powerful and features all-wheel drive, but it doesn’t use mild hybrid tech yet the official rating is extremely close to this FWD MX-30. It’s not like the Mazda is overly weighty, either. The tare mass is listed at 1440kg, while the C-HR hybrid weighs 1435kg. 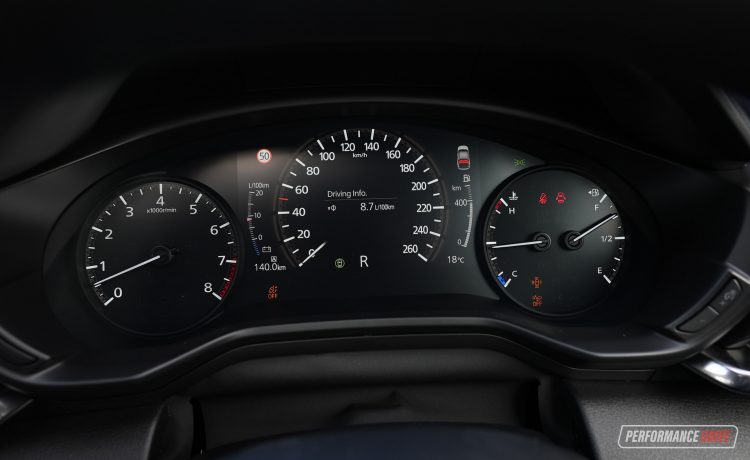 During our week with this test car we averaged 8.0L/100km. That included performance testing but also lots of country road driving and some highway stuff. In our opinion, this is not good enough, especially for its level of technology and performance. Obviously the mild hybrid tech does benefit the environment, though, as the official emissions average is only 150g/km. For comparison, that’s lower than the Kona 1.6T (159g) and the Toyota C-HR 1.2T (159g), even though they are AWD. The C-HR hybrid is the kindest to the environment, at 97g/km.

As is the case with most naturally aspirated engines (non-turbo), this engine needs to be revved to access its power. And that seems counteractive to what this vehicle is about, we feel. Peak torque isn’t available until 4000rpm. For example, if you’ve got four people in the car and need to drive up a long mountain climb, be prepared to have your ears bashed by the screaming engine. There is a sporty note from the exhaust pipe, but we’re not a fan of the in-car sound – it’s more of a noise than a note.

Across 0-100km/h we clocked a best time of 10.27 seconds. That is a bit behind par for this class and this level of power. We’ve been testing cars in this way for over 10 years now, and we’d expect a car like this to undertake the sprint in around 9.0 seconds. Again though, this engine needs to be revved and you need to push the pedal deeply to achieve this. A turbocharged competitor, perhaps with more gears over this old six-speed auto, you could apply only half-throttle to get the same job done. 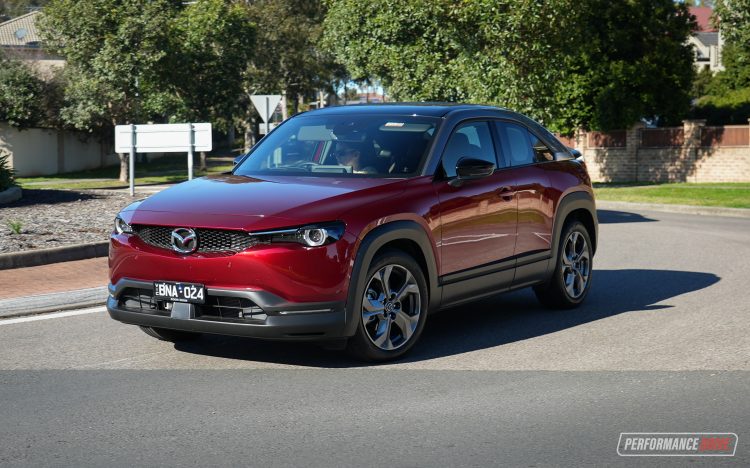 Obviously these types of vehicles are not about performance, at all. But we do find it interesting that many rivals either offer superior performance at a marginal increase in fuel consumption, while others are slower but at least the fuel economy is much more attractive and in sync with the performance.

Aside from the revy engine, the MX-30 does offer a pleasant drive experience. It feels solid and secure on the road, and despite adopting an old-school torsion beam rear suspension arrangement, the handling is properly fun and interactive. The steering provides lots of feel-good communication too, and even the steering wheel itself is a joy to grasp. With more power on board we think this could be a very entertaining driver’s runaround.

All models are front-wheel drive, as mentioned, so there’s no confusion about off road capability. Ground clearance is measured at 180mm though, which is enough for moderate dirt roads.

As we observed from the beginning, there is no doubt Mazda has conjured up a very interesting package here. The design truly inspires imagination and the interior is absolutely brilliant, both aesthetically and in terms of quality and attention to detail. The list of standard features, and how they operate, also stands above many rivals in this class.

For us, the only letdown is the powertrain. It needs to offer better fuel economy to prove its credibility as an ‘electrified’ package, and if not, then power and performance need to shine brighter to cut through the competitors.

CONS:
– Disappointing fuel economy for a mild hybrid
– Six-speed auto is behind times
– Funky reverse-swing rear doors can be problematic