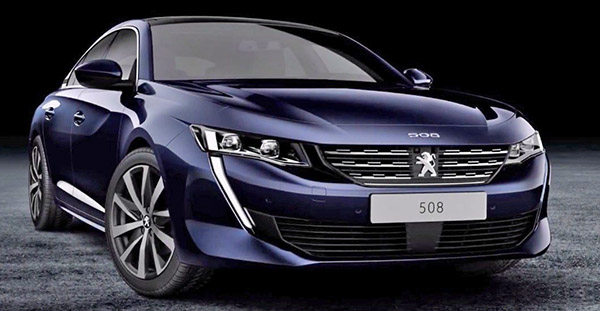 The 2018 Peugeot 508 has leaked online ahead of a suspected Geneva show debut, with a bold and fresh design as promised by previous concepts, such as the Exalt and Instinct.

The new 508 has a rather rakish silhouette, putting it in the four-door coupe category with the Kia Stinger and Volkswagen Arteon. It bucks the trend of rivals Mondeo and Insignia (Commodore) towards large, six-window designs in favour of a more svelte and seductive form.

Noteworthy design elements include the black rear applique that evokes earlier Pininfarina-designed models such as the 405, aggressive headlights and LEDs, a sporty grille and a ducktail spoiler on the rear decklid.

The interior has plenty in common with the 3008 SUV, including the geometric two-spoke steering wheel, trigger-shaped gear selector and large screens for instrument panel and infotainment. Large keys adorn the latter.

Locally, Peugeot has not sold the 508 since last year and it was not a stellar performer in terms of selling volume. The company has taken a bold direction with this new model in the face of declining D-segment sedan sales. The EMP2 platform is the most likely candidate with the brand’s latest petrol, turbo-diesel and mild-hybrid powertrains. More details are expected soon.