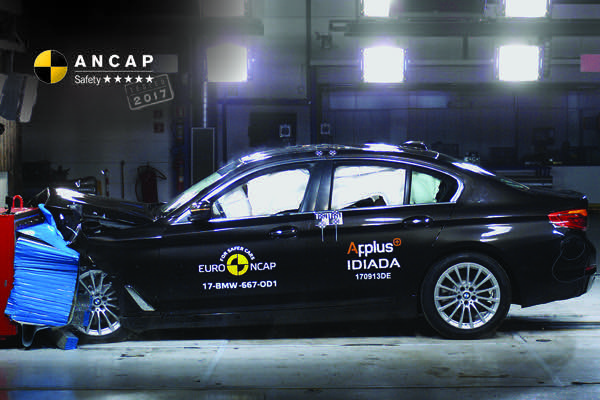 The latest BMW 5 Series has been subjected to Euro NCAP’s stringent crash testing procedures, with our local ANCAP division giving the results the full five-star standing.

The testing was carried out on the 520d in Europe, with the Australian ANCAP team going over the results with a fine-tooth comb before stamping its five-star approval.

As one of the most expensive vehicles to go through crash testing procedures, BMW will be glad to hear the new 5er has been given top marks in most areas, with “Good” given in the area of risk of serious head injury.

A mark of “Marginal” was given in regards to the risk of injury to the upper legs of the driver, mainly due to the omission of a driver’s knee airbag on the Australian-spec 520d. An airbag is fitted as standard on the overseas version.

ANCAP gave top marks to the car’s autonomous emergency braking system, which is fitted as standard on the 520d. It operates at highway speeds and can detect pedestrians, avoiding or mitigating collisions at “most test speeds”.

“Equivalent European models are fitted with a driver knee airbag, yet here in Australia we’ve again seen a car brand change the safety specification of a global vehicle provided for our market.”

The five-star rating applies to the 520d only, with other variants listed as untested. We’re sure the upper variants would perform similarly.