Some more rumours are swelling surrounding the idea of a Toyota 86/Subaru BRZ four-door sedan. The latest suggests the new model will come with a turbocharged version of the 2.0-litre engine, with the possibility of all-wheel drive. 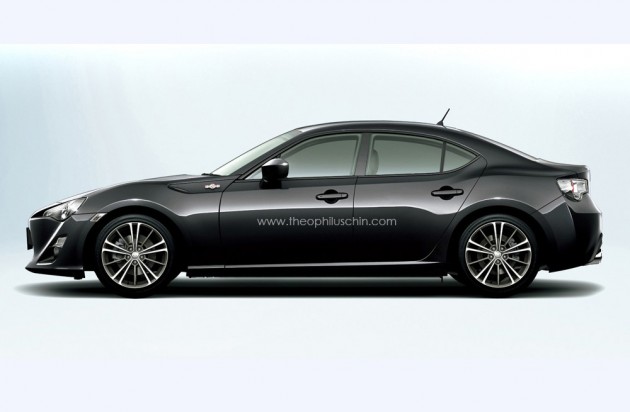 It’s understood Subaru is looking to build a production version of the Cross Sport concept, and it’s this model that will apparently translate into a sedan version of the popular coupe.

Sources have reportedly said that it would be easy to bring the B-pillar forward in the BRZ/86, allowing room for two rear doors. The roof would also be pushed up slightly at the back to provide rear headroom.

As for the engine, the current 2.0-litre naturally aspirated boxer four-cylinder is set to make way for a turbocharged unit. The added torque of the turbo would account for the added weight.

More interestingly, there’s said to be a possibility Subaru will apply its renowned all-wheel drive system to the sedan. At the moment, the BRZ is the only rear-wheel drive model the company sells. All-wheel drive could potentially increase track performance, albeit tarnishing some of the fun.

Toyota, on the other hand, has apparently already approved production for a sedan. Instead of a turbo engine though reports are indicating a hybrid may be used.

It’s all a little unclear at this stage and we are yet to hear anything from the companies officially. Even so, a market arrival is anticipated to take place some time in 2016.