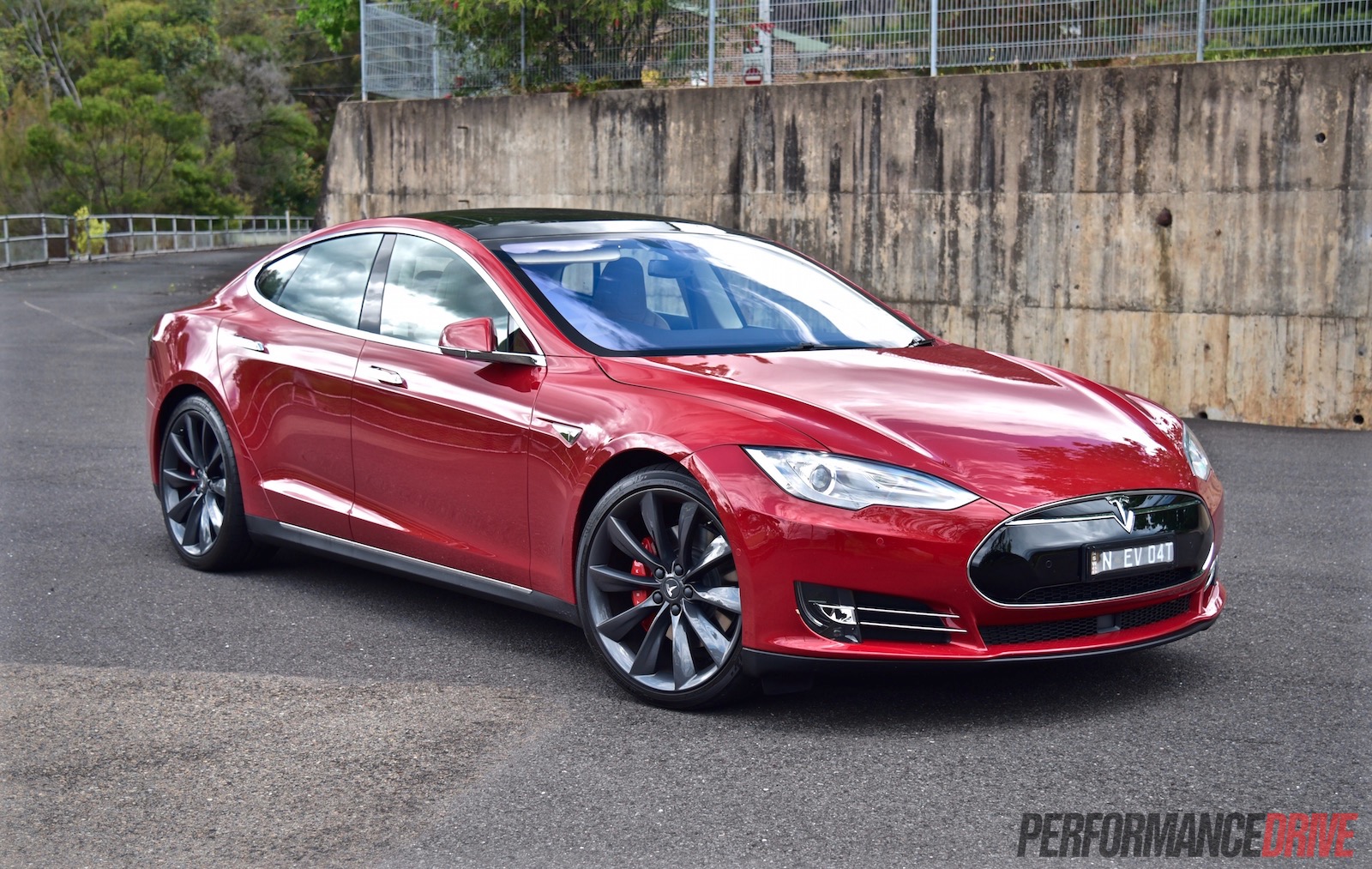 This is it, the grand daddy of all Tesla models. Introducing the Model S P90D, featuring the now-famous “Ludicrous” speed pack and the revolutionary Autopilot cruise control system. 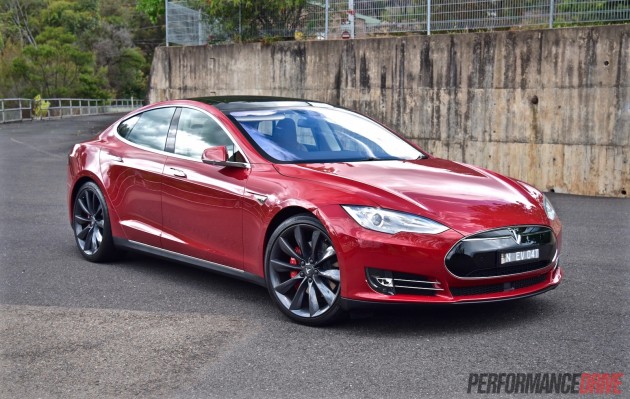 If you haven’t heard of or seen a Model S by now all you need to know is it’s a fully electric large sedan – the only one in the class actually. And in P90D form with the optional Ludicrous pack (yes, it really is called that) it is officially the quickest-accelerating production sedan in the world.

There are a number of different battery pack and output levels available, with prices starting at about $122,000 for the entry level, rear-drive 70D (70kWh) version. This is the top model though with almost every conceivable option. So, as you might expect for a record-breaking car, prices are steep. It kicks off at around $248,000 as tested (before incentives). Let’s go through some of the cool as-tested options and futuristic functions. 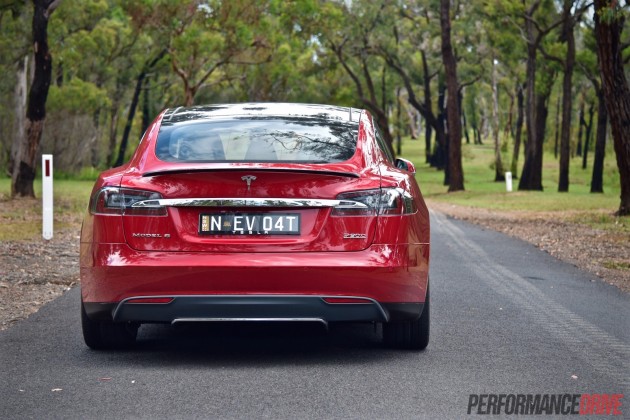 The P90D starts life as the P85D – the second quickest sedan in the world with its “Insane” speed mode. Buyers then need to option for the P90D, which references the 90kWh battery pack, up from 85kWh. This sets you back $4300. Range is increased by around six per cent, lifted from 491km to about 520km – although this test car said 540km on the on-board range calculator when we picked it up fully charged.

Next up, the Ludicrous speed upgrade. Output is rated at 397kW (battery limited maximum motor shaft power), while the P85D is rated at 376kW. This option requires a $14,300 investment, but not only do you get the coolest button ever fitted to a car, you also get the kind of acceleration that compares well with a modern V12 Lamborghini. More on that further down.

Then we have the Autopilot option, adding $3600 to the bill. It is the most comprehensive and most advanced autonomous-like driving function currently on offer in Australia on a standard motor vehicle. It allows you to drive on highways without touching any controls, including the steering wheel. Yep, you read correctly. It can drive itself at highway speeds and brake and steer all by itself, even dealing with traffic. More on that below as well.

Finally, the other options fitted here are mainly cosmetic, such as the carbon fibre rear spoiler ($1450), 21-inch alloy wheels ($6400), and the premium interior and lighting package with plush Alcantara trimmings ($4300). There’s also an air suspension setup underneath with ride height adjusting functions ($3600). 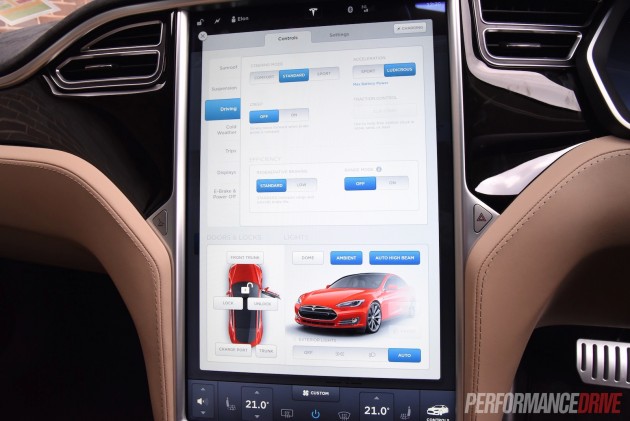 It’s easy to see how the price can be blown out to wild proportions, however, this car sets benchmarks in so many areas that it almost seems good value, especially when compared with high-end supercars and some of their option lists. And we haven’t even mentioned everything yet, like the industry’s largest touch-screen (17-inch) infotainment system which is fitted as standard. It’s constantly connected to the internet thanks to an on-board Telstra SIM card which lasts three years, offering WiFi connectivity so you can update the software using your home internet from the garage. We haven’t mentioned the way it drives yet either, which is sure to justify some of the price. 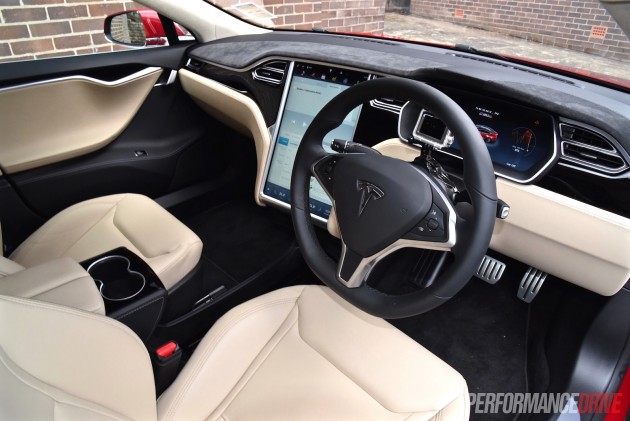 Back to the interior though. As a large luxury sedan there aren’t many rivals that offer the freedom and airy atmosphere of the Model S. Thanks to the clever sandwich-type chassis the interior floor is pretty much completely flat. Rear seat space is very generous, even in the middle, with plenty of width, and in the front the low centre console and minimalist dash leaves more than enough legroom.

We’re not a fan of the elongated shallow bucket as the centre console, or the centre arm rest. Despite being perfectly placed for relaxing driving, the bulky arm rest features no accessible cubby hole inside it. There are two cup holders, but as for the rest of your handheld knickknacks they are left sliding up and down in the trough.

Cargo space is simply the best in the class, with a 774-litre boot in the back complete with an under-floor cavity, as well as a 150-litre boot under the bonnet. Maximum space is rated at 1795 litres. 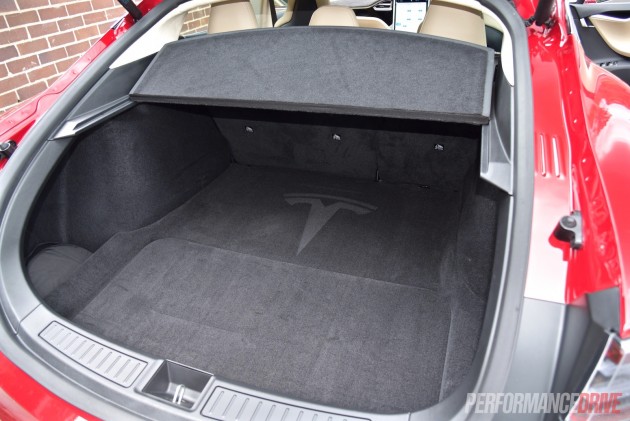 To drive the Model S you obviously don’t need to start the engine. Instead, you just move the column shifter into Drive and apply some throttle. There is a function called ‘creep’ that you can turn on which basically provides some forward movement when you take your foot off the brake pedal, a bit like a conventional automatic. If this is off though the car will remain silent and stationary in drive until you apply throttle.

Once you’re up and running and moving about in traffic, the electric motors do make a very faint whirring noise, but you have to listen carefully and you need to be applying a reasonable amount of throttle. Otherwise there is only general tyre roar and wind noise to be heard. It is extremely peaceful.

We have to commend the air suspension option because it provides a really supple and forgiving ride. The ‘bags’ of air soak up nasty bumps with very little vibration ricocheting into the cabin, adding to the tranquility. There seems to be a decent amount of wheel movement and suspension travel too, so the wheels are always firmly planted on the road.

Some of that planted feeling comes from the weight. It tips the scales at a hefty 2187kg. This is an enormous weight for a large sedan. Yet, it doesn’t behave like an overweight beast. The steering feel is light and responsive, and paired with the rigidity of the platform it means it is surprisingly agile.

We tried pushing it hard down our favourite test route and it responded confidently and capably. It leans into corners and remains committed to your line, never slipping or stepping wide. You can even throttle up mid-corner and the all-wheel drive system will sort everything out. It’s remarkable, really, the level of grip, considering the power and torque output on hand. In fact, we’d love to test it out on the track to see what sort of lap time it produces. Unfortunately, Tesla won’t let us. 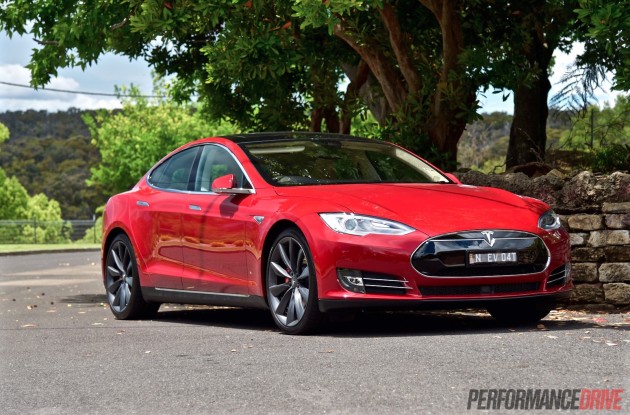 So, overall, the Model S P90D is a well-sorted high-end  luxury sports sedan capable of keeping up with the best of them in terms of handling and driveability. But what about the Ludicrous mode and Autopilot, we hear you asking. We’re simply saying that even without these technological goodies the car is a high-ranking product.

In Ludicrous speed mode the throttle becomes sharper and the batteries are expelled at their maximum rate. All on-board power is brought forward with a priority to provide the highest level of acceleration. Tesla quotes a 0-100km/h time of 3.0 seconds, using Motor Trend‘s test method whereby the first 30cm rollout is subtracted to try and represent a drag strip. After a number of tests using our Racelogic VBOX Sport, the best average we achieved was 3.2 seconds. Still, it’s hardly what you would call lazy. This is the exact same time as the latest Lamborghini Huracan V10 supercar.

As for the Autopilot feature, it is simply mind-blowing. Although Tesla doesn’t encourage it, we let the car drive by itself for around 50km on a busy Sydney highway. It asked us to merely touch the steering wheel about every two minutes just so the car knew we were still alive, but apart from that the car does everything itself, including reading traffic in front, behind, and to the sides. It can even change lanes by itself. You simply tap the indicator and the car’s sensors will wait for a safe time to swap lanes. It then catches the road markings or objects (such as a wall) on the other side of the next lane and maintains steering within it. The indicator won’t self-cancel and in our opinion we think this technology is a bit gimmicky – most of the time we preferred to change lanes ourselves as it is quicker – but as a technology it is unbelievable, and an interesting insight into what is coming in the future. 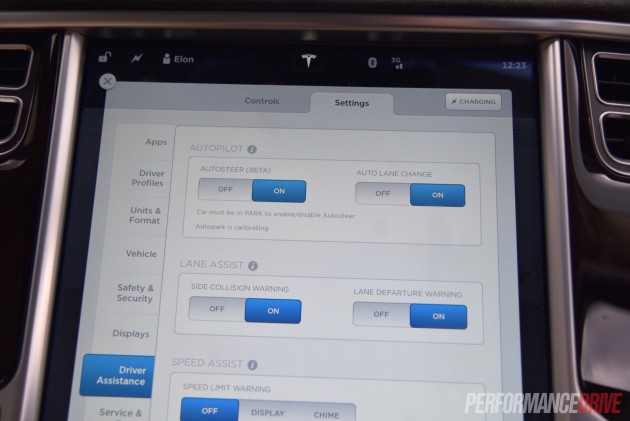 There isn’t much not to like about the Model S P90D. It uses no fuel at all, so it’s healthy for the environment, yet it is literally as quick as some of the very quickest supercars of today. The interior is one of the most pleasant places to be in terms of moving vehicles, and that touch-screen system is just incredible. We guess the only negatives are the price, and the fact that it doesn’t offer any sort of exciting, high-revving engine sound that we’re all used to. If you have the money (or even if you don’t), you have to at least take one of these for a test drive once in your life just to see for yourself. You’ll be blown away.