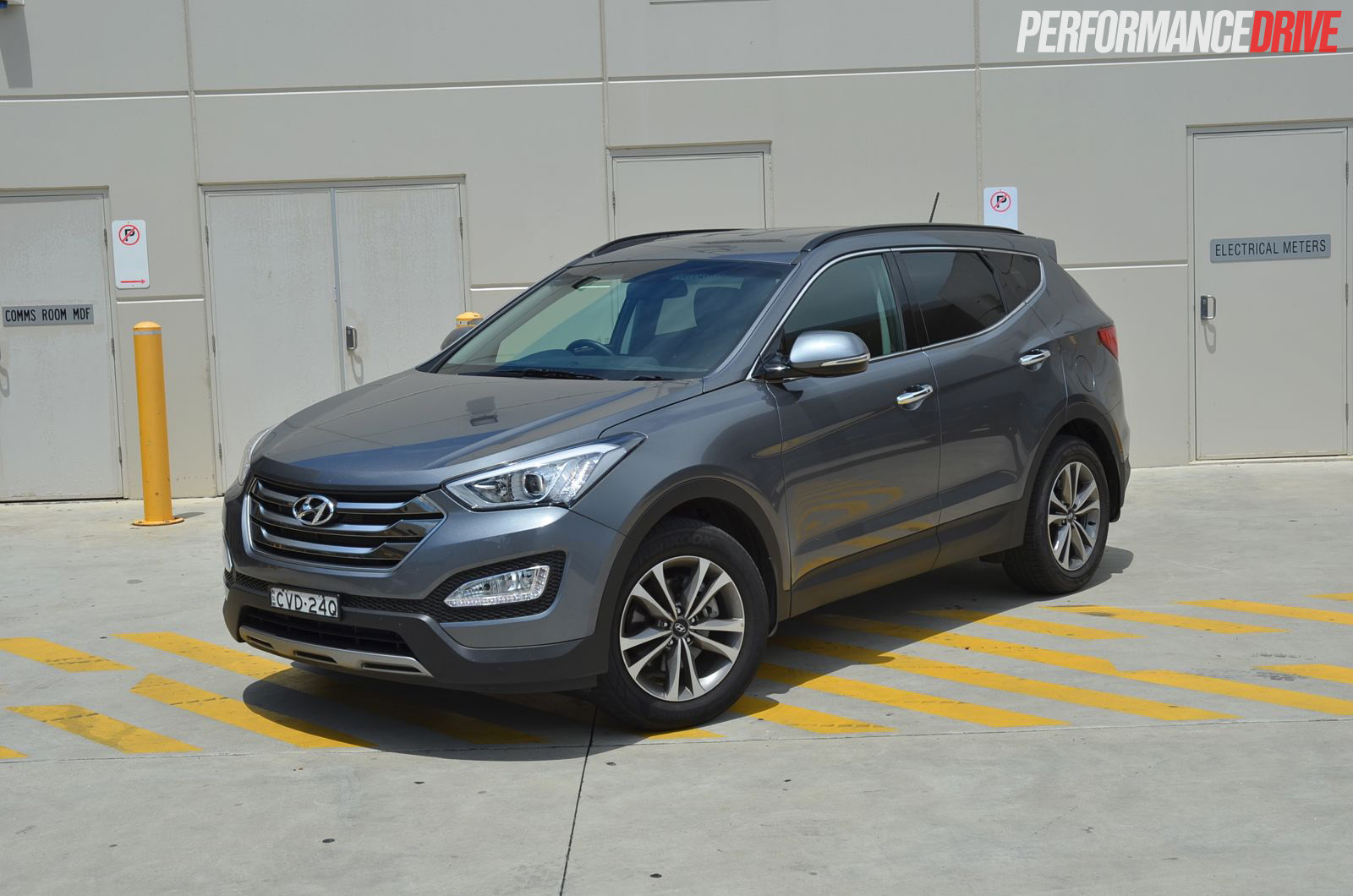 The SUV market is flooded with numerous makes and models at the moment. Even the seven-seat segment is hard to decipher. Here we’re testing the 2015 Hyundai Santa Fe Elite CRDi, which could be one of the best high-riding car-like seven-seat options around. 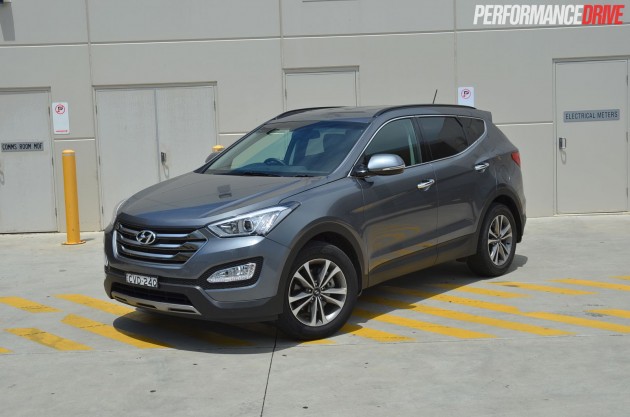 The Santa Fe range starts from $38,490 and tops out at $53,240. It comes available in Active, Elite, and Highlander form. Both the Active and Elite come standard with a 141kW/242Nm 2.4-litre four-cylinder engine, or for $3000 extra you can opt for a more frugal and powerful 145kW/436Nm 2.2-litre turbo-diesel four-cylinder. The Active model comes standard with a six-speed manual transmission, with six-speed automatic adding $2500. Both the Elite and Highlander come with the CRDi engine and six-speed auto as standard.

The Elite CRDi model (as tested) starts from $48,490, putting it at the higher end of the seven-seat SUV market for a mid-range model. 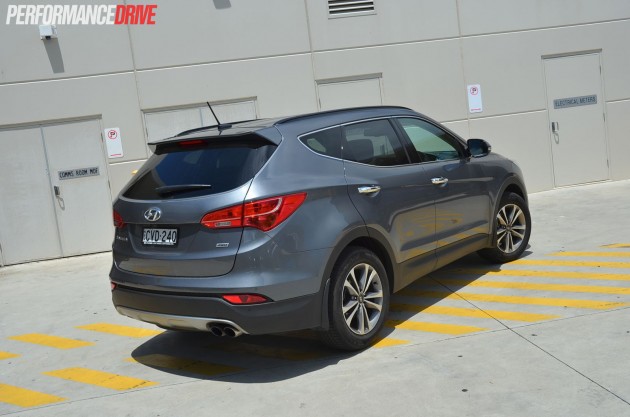 For a mid-range model, though, it does comes with a lot of standard kit; keyless entry, a power tailgate, leather trim, dual-zone climate control with independent ventilation controls for the third row, rain-sensing wipers, as well as auto headlights.

Step inside the Santa Fe and you’re greeted with an airy cabin that uses various shades and textures to create a modern feel, even if some of the plastics do appear a little on the cheap side. The front seats are well padded for long journeys, as is the second row which is happy to take three adults. The third row is really best left for kids or teenagers as the high floor can be a problem for adults. Accessing the third row is also a bit fiddly.

The raised ride height of the SUV means jumping in and out is a breeze, especially if you have kids to strap in; you don’t have to bend down. With the third row laid flat the Santa Fe offers 516 litres of cargo space, or a TV-swallowing 1615 litres if both the third and second row are folded down.

Buyers will take a liking to the seven-inch touch-screen interface that proudly sits in the middle of the dash. It offers satellite navigation, Bluetooth, USB and aux-in. While it’s not one of the easiest systems to use as some of the controls and menus are a little clunky and confusing, the screen itself is clear and sharp. It’s one of those units that once you master it you won’t have a problem.

Safety-wise, the Santa Fe offers a full five-star ANCAP rating, scoring 35.63 from a possible 37 during the most recent crash tests. The score was achieved thanks to features like stability control, traction control, as well as dual front and front side airbags, a driver’s knee airbag, and curtain airbags for the first and second rows. A rear-view camera is also standard on the Elite. Passengers in the third row go without airbag protection.

From the outside the Santa Fe is one of the more modern-looking designs in the SUV field, with its large hexagonal chrome front grille, bold exterior shapes, and LED daytime running lights. Even though it’s a model that’s been around since 2012, we think it’s still suave enough to cut the mustard against its competitors. 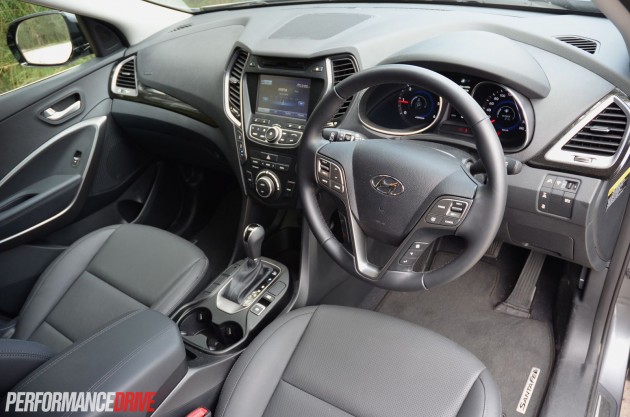 Despite tipping the scales at 1968kg, the diesel motor has no trouble getting things moving. In fact, low- and mid-range pickup is something of a strong point. It provides effortless freeway grunt so you tend not to notice crests or rises when you’re out on the open road, and it gives off a refined and clatter-free roar.

The six-speed automatic is well matched to the CRDi unit too, functioning seamlessly through the gears; whether you’re trying to conserve fuel or trying to get moving in a hurry, the gearbox uses the gutsy torque curve to deliver what you need. The transmission isn’t all that responsive in ‘manual mode’, but it’s not the kind of car you’ll be hooking around a race track anyway.

Hyundai prides itself on making sure all of the models it sells in Australia are fitted with a suspension tune that suits our conditions. And it shows. The Santa Fe brushes back road quibbles with ease, remaining calm and connected to the road without giving the driver a hard time. The steering is touch on the dull side for entertainment, but nonetheless it is simple to navigate at both slow and fast paces.

Out on the road the Santa Fe offers a clear view of the surroundings, as well as a relaxed driving position. The steering wheel has enough adjustability to ensure it falls into your lap, with all of the available the controls within arm’s reach or at your fingertips.

We took a turn onto some light off-road tracks to see how well it can live up to its SUV status. While it’s no LandCruiser, the Santa Fe is able to clamber over mild terrain with no trouble. It uses an on-demand four-wheel drive system, which means it’ll distribute torque to all four when needed. We’re not so sure how it’d go in the really rough stuff, but we did tackle a few gravel hills with a couple of decent lumps and it proceeded up without a worry. Its 185mm ground clearance is obviously not class-leading, but it is higher than the average station wagon. 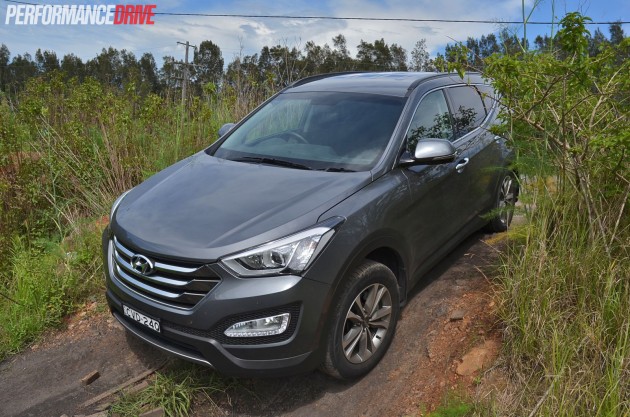 The Santa Fe Elite is a very good prospect if you’re in the market for a seven-seat diesel SUV. Not just that, it’s an even greater prospect if you’re in the market for a spacious vehicle that offers decent power and torque and reasonable driving dynamics. It’s a vehicle that’s easy to drive as a day-to-day family workhorse, it offers five-star safety, good efficiency (we averaged 8.5L/100km, official average is 7.3L/100km), and superb comfort. Do yourself a favour and test drive one before you sign on with any of its competitors.

CONS:
– Priced towards the higher end of the segment
– Some cheap-looking cabin plastics
– Third-row access is tight 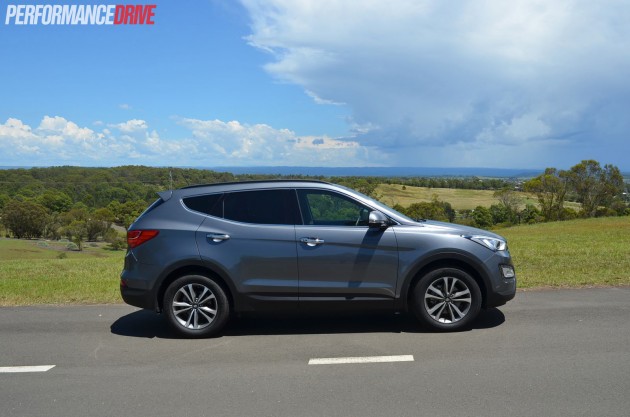