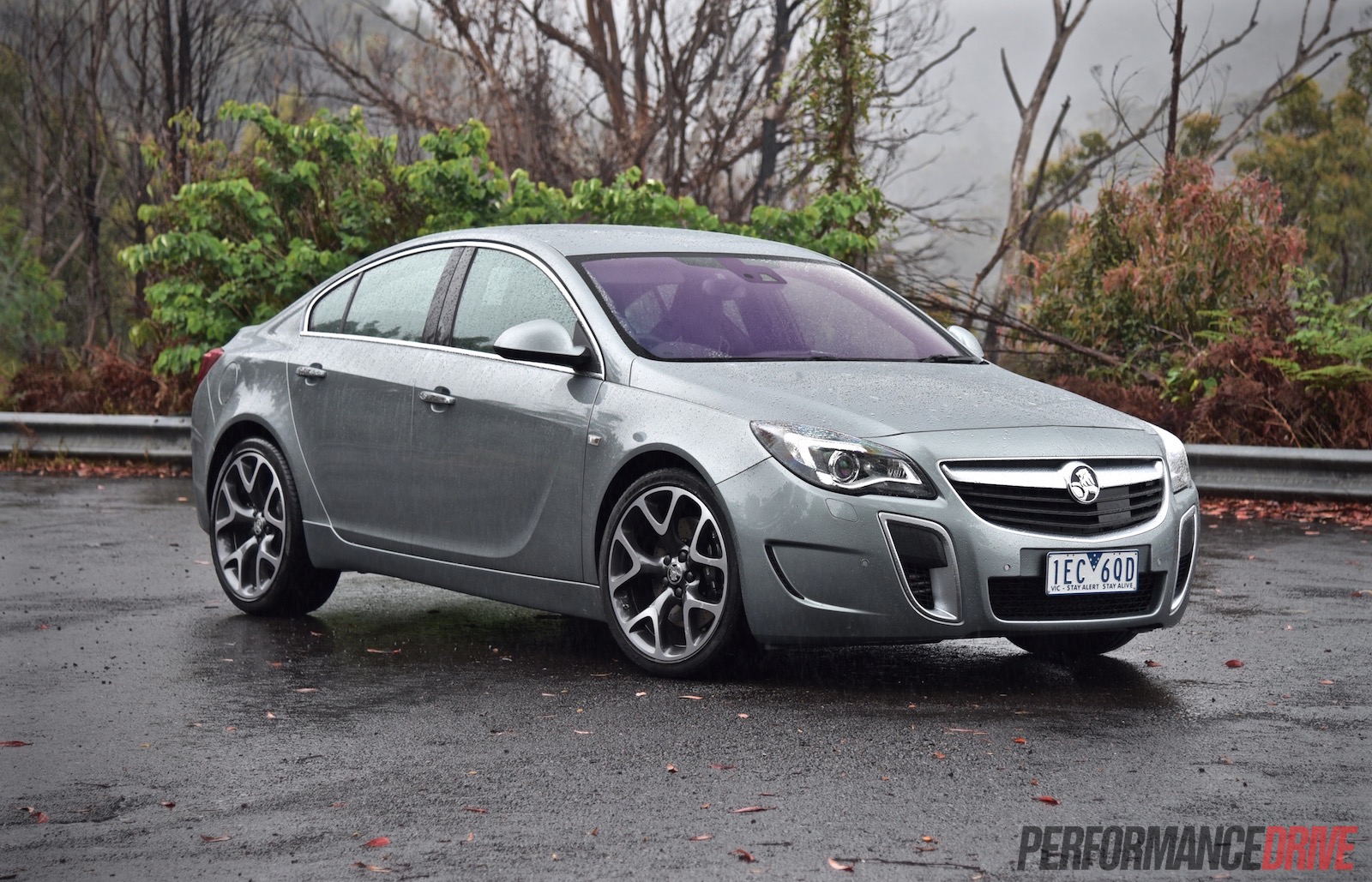 Despite Opel’s best efforts to move metal in Australia the European manufacturer pulled out of the market after a short-lived stint from 2012 to 2013, leaving Holden an opportunity to obtain some of its vehicles. 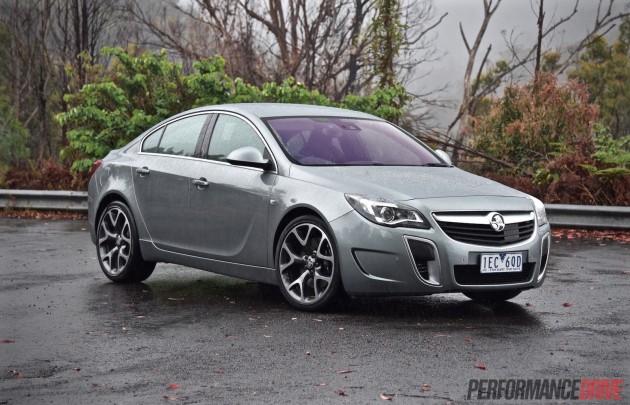 Built by GM’s European Opel brand in Germany, the Holden Insignia VXR enters the market as bit of an oddball choice for typical Holden buyers, given its European styling and turbo V6 all-wheel drive powertrain combo.

The Insignia VXR is essentially the same car that was introduced to European buyers back in 2009, which kind of makes it a bit long in the tooth now. The only new additions to the Holden over the OPC model that was sold during Opel’s time here are some new active safety gear, an updated instrument cluster, and updated MyLink infotainment system.

Under the skin sits a 239kW and 435Nm turbocharged V6, and an all-wheel drive system that features a limited-slip rear diff as well as a centre diff that can completely split the torque between the front and rear wheels depending on the conditions.

Prices for the Holden Insignia VXR are down $8000 to $51,990 compared with the Opel version of a couple of years ago. What you get for your money is quite remarkable really. 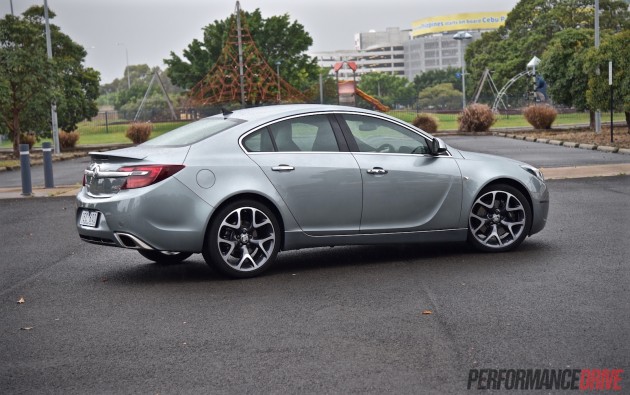 Sitting in the middle of the dash is GM’s latest MyLink infotainment system, which is much-improved over the clunky previous systems Holden has used. Sound buffs will warm to the quality sound that emits from the seven-speaker Bose sound system, which offers DAB digital radio – although with limited reception – and Bluetooth connectivity.

Also new to the Insignia thanks to Holden is an eight-inch digital driver display that replaces the more conventional analogue speedometer and tachometer. Performance nerds will appreciate the in-built lap timer and G-metre, as well as the funky change to red whenever ‘VXR’ mode is selected.

The cabin certainly has a premium feel to it, offering passengers cocoon-like comfort and sportiness. The Recaro seats are made big enough to absorb the average Aussie, however, legroom in the rear isn’t what you’d call overly generous. In the middle seat in the back it is particularly tight.

We found quite a few issues with the interior in general actually. The MyLink system jammed up and reset itself on a number of occasions, and the fancy touch-control buttons for the temperature setting can be very frustrating as they require multiple, really firm presses to engage. 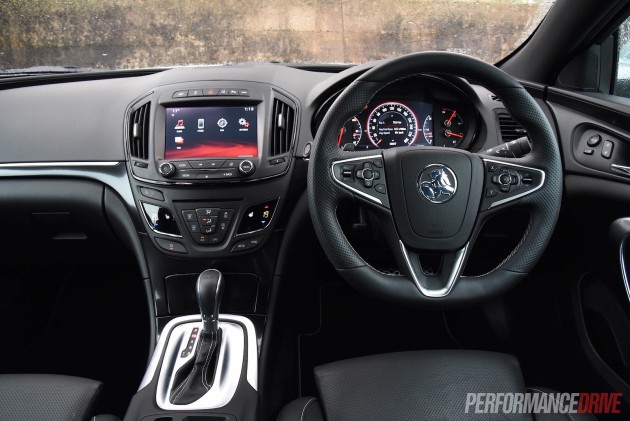 On paper the Insignia VXR performance specifications are enough make you rub your hands together. Here’s where reality sets in though. Select drive and give the accelerator a shove and you’ll notice what’s on paper doesn’t necessarily translate into the kick in the pants you imagined.

Off the line the VXR feels like it’s being held back. It lacks a sense of urgency to rush straight off the line. This goes on for the first three gears.

Once you’re moving the Insignia does get up and mumbo, but it feels more like the kind of power you get with the conventional V6-powered Commodore rather than a turbo all-paw performance car. And we feel this is down to the six-speed automatic. The auto is very slow to upshift and the gears seem overly long-legged. During our test, the gearbox also shunted and jerked rather abruptly in normal Drive mode, but this could be down this car specifically which has probably had plenty of hard-driving journalist testing miles put on it.

The hugging Recaro seats and beefy Brembo brakes lead you to believe the Insignia VXR should be chewing at the tarmac more than it does. Across the familiar 0-100km/h sprint the best average time we could achieve was a disappointing 7.8 seconds. European customers can choose to have their VXR with a six-speed manual transmission. Unfortunately, it’s not available in Australia. What this car really needs is a seven- or eight-speed dual-clutch auto to maximise the turbo grunt.

Driver’s can choose from Sport and VXR driving modes. While we found it hard to spot the difference between the two, VXR mode does noticeably change bump and rebound settings for the dampers, as well as sharpening the steering and throttle response.

If you like your sports cars sounding good, like most of us, the V6 sure does make a nice racket. The rumble you hear on start up settles into a nice turbo six-cylinder hum as you hunt through the lower gears. The soundtrack then reaches an aurally sweet yelp as you reach the upper-middle part of the engine’s rev range.

If you can’t get the power to excite you then the VXR’s handling ability will leave you smiling. The chassis feels more than up to handling the power on offer. In fact, it feels finely-tuned like no Holden before it, hugging into corners like a possum launching from tree to tree. The AWD system uses its centre diff to negotiate what end of the vehicle is in most need of grip, resulting in relentless grip even in poor weather conditions.

Ride comfort is similar to equivalent-sized European sporty sedans, meaning it’s taut and sporty, while offering some suppleness through town and a little body roll in the bends. It certainly retains a direct feel that’s expected from a performance car when you up the ante in VXR mode, confidently sticking to the road and corners with no understeer and no hint of oversteer.

The Brembo brakes measure 355mm up front using four-piston calipers, with 315mm discs at the rear. These are some great stoppers, with fade non-existent during our heated  test. Each and every press provides a meaty feel with good communication too. 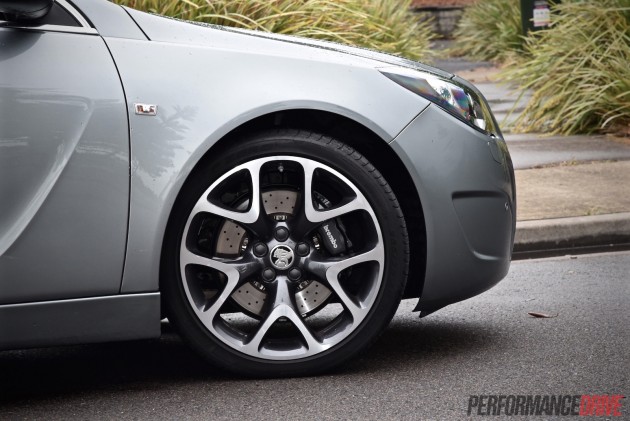 There’s loads of rumours floating around that the new Commodore platform could be based on the next-gen Insignia. So, could the introduction of this Insignia VXR simply be a preview to allow us all to get used to it? Or simply to offer one of the toughest new-car markets another performance car?

In the end, the Insignia VXR delivers in areas and misses in others. There’s certainly no doubting the packaging was right up there with the best of them when it was originally launched overseas back in 2009, however, the performance is just not good enough by today’s standards in our opinion, especially with an official average fuel consumption sitting up high at 11.3L/100km – we averaged about 12.4L/100km. It seems very obvious to us that this car is just too old to be considered new.