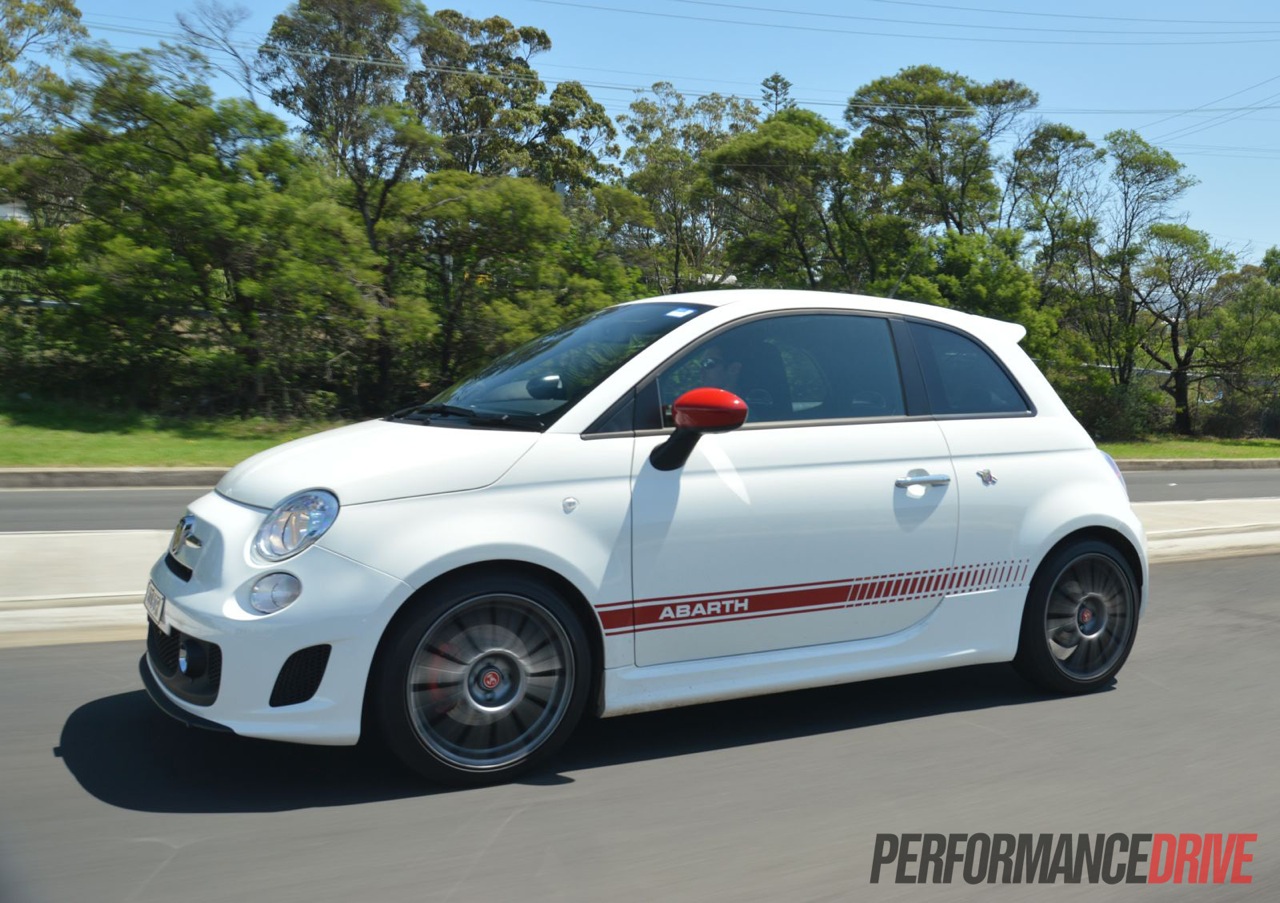 Take one rorty 1.4-litre engine and pump up to 20psi of boost into it and what you’re left with is the extremely feisty Fiat 500 Abarth Esseesse. It might be small but it carries way more than a case of short man syndrome. 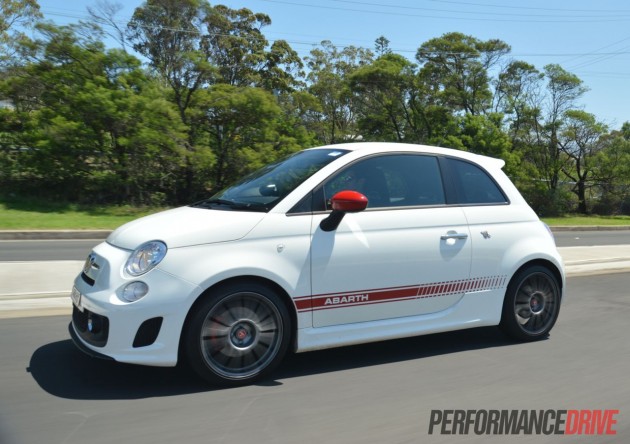 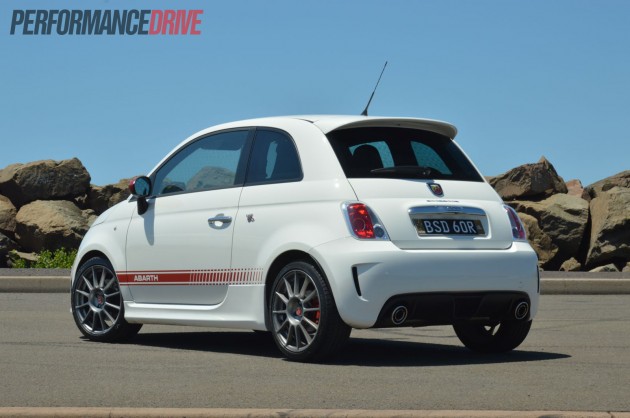 Fiat – roughly translated to ‘Italian automobile manufacturing, Turin’ – is one of the biggest car manufacturers in the world. It might not seem large here in Australia, in fact, just 1432 Fiat passenger vehicles were sold here during all of 2012, however, we have to remember Fiat owns Ferrari, Maserati, and Alfa Romeo. It also now owns Chrysler Group (Jeep, Dodge, Ram, SRT, and Mopar). In other words, it has the strength and the knowledge to really shake up the industry.

So what’s this Abarth version then? Well, many Australians might not recognise, or appreciate, the Abarth badge. In its home land in Italy though, enthusiasts know that anything with ‘Abarth’ on it means it’s quite serious. Abarth is to Fiat what HSV is to Holden; it’s the in-house performance division that completely works over the standard car to turn it into a pure driving machine.

You only need to take a look at the cross-drilled Brembo brakes on this thing to realise what we’re talking about here – some $100k-plus sports cars don’t even come with cross-drilled brakes. There’s also sports lowered suspension with an adjustable sport button setting on the dash, spoilers front and back, and a spruced up interior to match.

The Fiat 500 Abarth Esseesse can be had in three-door hatch (as tested) or cabriolet forms. The hatch comes with a five-speed manual while the 500C cabrio comes with a sports automatic only. 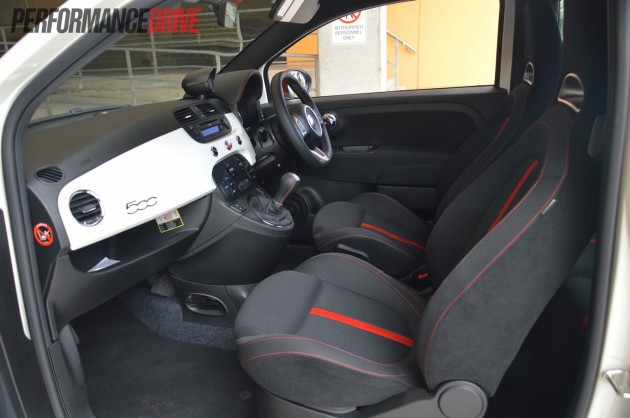 The 500 Abarth presents one of the awkwardest driving positions we’ver ever experienced in a modern-day car. The driver’s seat feels like it sits too high and only the rear of the cushion can be lowered. The steering wheel feels too far away as well and it can only be adjusted for rake. The pedals also extend out almost horizontally so it kind of feels like you’re driving a van.

To make matters worse, the functionality of almost all of the controls, including the media player, the air-conditioning, and even the glovebox – which doesn’t have a lid – seems cumbersome, fidgety, and impractical.

It does come with plenty of equipment for a small car, including USB/Bluetooth compatibility, air-conditioning, power mirrors, and auto headlights, however, you’ll need to spend some time getting acquainted with all of these before you completely understand how they operate. It’s simply not an intuitive or immediately user-friendly type of vehicle in our opinion. 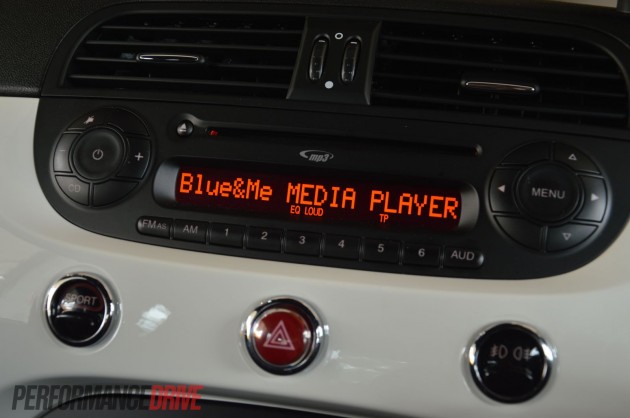 Happily though, and we truly mean happily, none of this matters a pinch when it comes to simply getting out on the road and going for a drive. This car is one of the funnest vehicles we’ve ever driven, and praise doesn’t get much higher than that. The theatre and the emotion this potent little pocket rocket creates is captivating, to say the least. We’ll talk more about the drive impression down below though.

The two front seats are bespoke Abarth-only items with decently bolstered contours for support, while in the back there’s two seats trimmed in a matching black and red theme.

Legroom isn’t too bad in the back considering this is a city super-mini segment vehicle. Headroom is a bit low however and it is likely to become an issue for taller passengers. 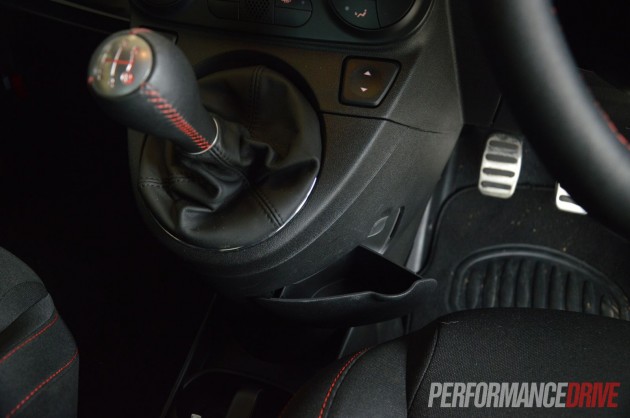 Throughout the interior there are lots of quirky elements and designs, including a big white dash panel which really livens up the cabin, lots of chrome switchgear, and some hidden away storage coves and pockets for your phone and keys and so on.

In the very back you’re not exactly going to fit a whole family’s worth of shopping in there, however, compared with rivals such as the MINI Cooper, cargo space is above average for this segment – 185 litres versus 160 litres in the MINI. If you can afford to flip down the rear seats, you’ll open up 496 litres. 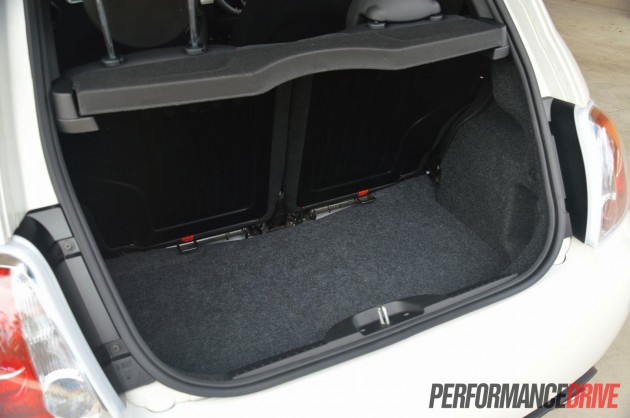 Being an Italian car, design is its middle name. It’s all about funky and young, and cute and compact. Abarth wipes some of that friendly character away by garnishing it with aggressive features all round.

At the front you’ll notice a low and sharp spoiler, black mesh grilles and intakes which guide air to the engine and brakes, while at the back air is swiftly sucked from beneath the car via a chunky diffuser. A roof/tailgate-mounted large spoiler and a set of lightweight racing-style 17-inch alloy wheels finish it all off. 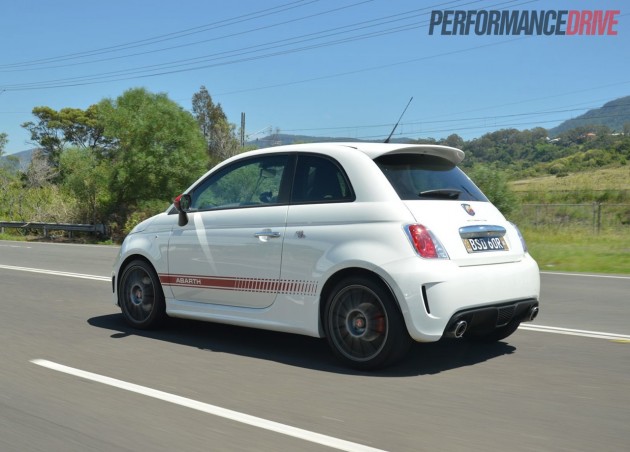 Australia’s ANCAP hasn’t specifically tested the Abarth but it has crash tested the normal Fiat 500 and awarded it the maximum five star rating.

Italian cars are almost always described as being emotional and passionate. With the 500 Abarth, it’s no different. When you’re behind the wheel, or even if you’re riding shotgun, all kinds of feelings are experienced, such as suspense, drama, joy, and even nostalgia. How can a car possibly do all that? You might ask.

The suspense comes from turbo-lag. There’s drama as the rush of up to 1.4bar (20psi) of boost comes on strong from 2750rpm, really pushing you back in your seat, and then joy as you’re hurtled down the road like a kid riding a slippery dip.

You’re also taken back in time too, not literally of course, with the induction noises. These mimic, pitch perfect, the sounds of twin SU carburettors. It’s incredible how Fiat engineers managed to do it. On purpose or not, it sounds bubbling brilliant. (Have a listen in the video above.) 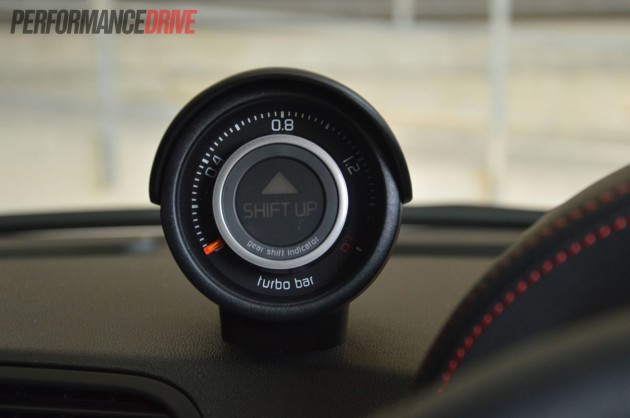 As mentioned at the beginning, there are some quibbles with the 500 that you will probably need to get used to. Take the boost gauge for instance. A boost gauge in a super-sporty car like this is always welcome, however, we’re not sure placing it right in the driver’s forward view is the ideal spot.

We get it, this is all about being ‘turbo’ and ‘sporty’, but is it necessary to billboard this in front of the driver’s face? Just on the right of the steering wheel next to the A-pillar would be perfect.

Another snag in our opinion is the manual gear shift. The gear lever falls right into your hand, it’s nice, but the shift action is a bit of a turn off. In normal suburban conditions, it feels like you’re pushing a stick around in a bucket full of sand and rocks. It’s especially notchy when its cold. 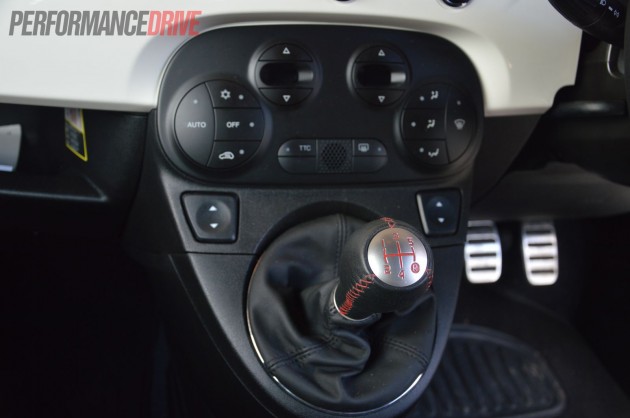 Okay, so the Abarth Esseesse has a few niggles, and there are some things that may take some getting used to. Don’t worry though, none of these really matter when you’re driving it like it wants to and has been designed to be driven.

Get active with the gear shifter and dance with the steering and pedals like you’re doing the cha-cha and the Abarth 500 Esseesse is magic. It feels so solidly planted around corners, you can hammer the throttle and it’ll just zip you around like you’re on a theme park ride. The gear shift feels much more pleasant too when you’re being vibrant, it seems like it enjoys enthusiasm. 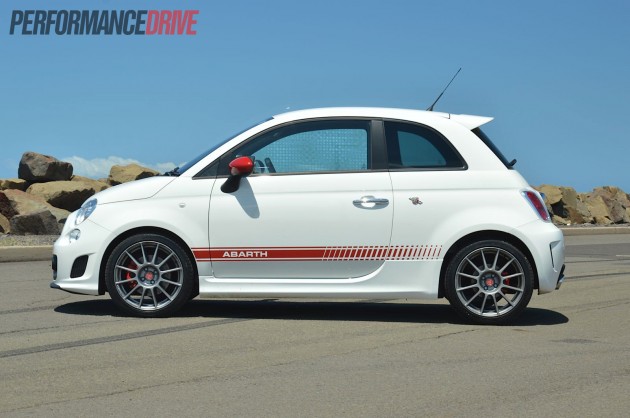 The 500’s composure over bumps at a reasonable speed reminds you of its minute size. This is not necessarily the suspension’s responsibility, rather, a character of science and physics. Due to the extremely short wheelbase (2300mm), rigid chassis, and very short overhangs, these touchy ingredients result in absolute mosquito-like agility.

It darts around corners, and under full power on the straights, the front wheels feel like they are directly pulling you’re arms and body forward. Communication between the driver and the car is extremely high, especially via the steering, which is very precise and well-weighted. It’s no wonder Michael Schumacher has one of these. 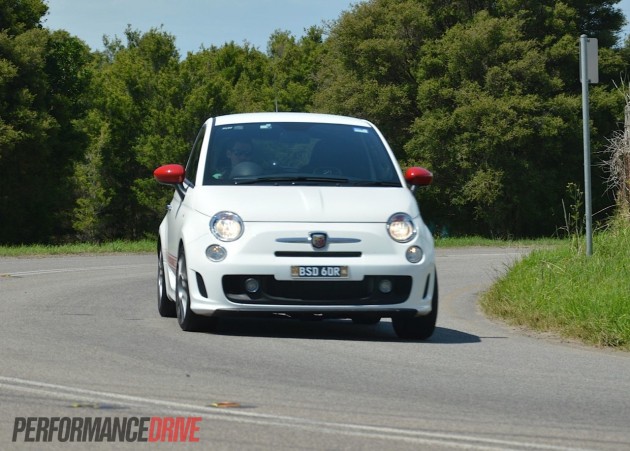 We timed 0-100km/h in 6.6 seconds, which is a quick time for a car with a $34,990 price tag. It’s one of those cars that you need to push to achieve its potential. And in that respect, it’s rewarding, playful, and euphorically fun to drive.

The Abarth 500 gets you a lot of European engineering for your $34,990. It also comes with the tacit benefits of being cool as not many people know what it is, but they probably have a feeling it’s something special. The suspension and the brakes are almost impossible to fault, and the chassis feels rigid and ready for some track work if that’s your thing.

The main problem we see is the quirky interior and driving position that Australians perhaps won’t be used to, and the badge, again, local consumers might be afraid to go near.

Take it from us though, the Abarth 500 is a superb driving machine. If you get a chance, take one for a test drive. We’re sure you’ll be blown away as much as we are. 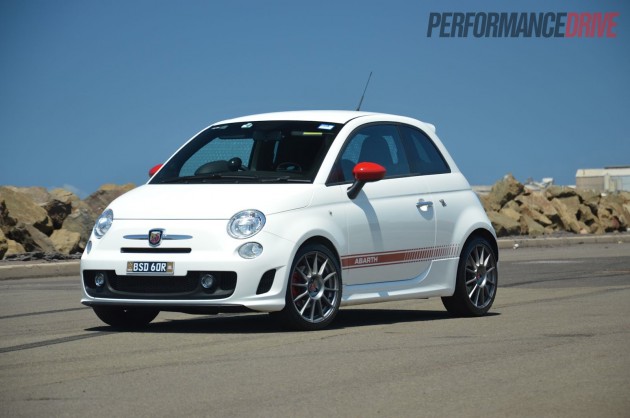