BMW is planning a 2013 BMW M6 Gran Coupe to rival the Mercedes-Benz CLS 65 AMG. Spy photographers from around the world have caught prototypes out on the streets testing. 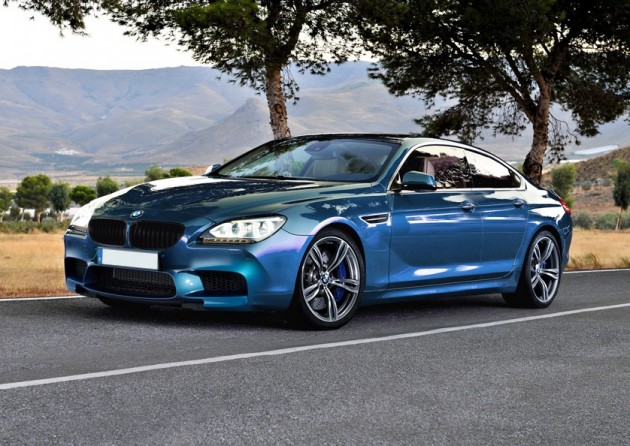 (rendered speculation only, by 6post.com)

The BMW 6 Series Gran Coupe, only unveiled last month, is a new four-door coupe vehicle for BMW. It will rival the trend-setting Mercedes-Benz CLS-Class. With a Mercedes-Benz though, comes a high performance AMG version, leaving BMW no choice but to develop a product of equal stature.

It will feature the same powertrain as the 2012 BMW M5 – on sale in Australia next month – consisting of a 4.4-litre twin-turbo V8. In the M5 it produces 412kW and 680Nm. However, the new M6 Coupe and Convertible – coming later this year – is expected to feature an ever-so-slightly retuned version of the V8.

BMW is yet to announce official figures, but for the M6 Gran Coupe at least, rumours are speculating an output of around 441kW. Giving the larger four-door coupe a bit of a power jump over the M6 Coupe, and subsequently, the M5, will make some sense as it is expected to be heavier than both. We’ll have to wait and see though.

As for the styling, the 2013 BMW M6 Gran Coupe will feature various trademark ‘M’ cues, such as an aggressive front bumper bar with more intakes and venting, and a discreet rear spoiler and rear diffuser section at the back sandwiched in between a quad-outlet exhaust system.. It will also get beefy alloy wheels and tyres, and of course, large brakes and sports suspension.

The 2013 BMW M6 Coupe and Convertible is expected to debut before the Gran Coupe is unveiled, meaning it won’t likely make an appearance until very later on in the year. We’ll keep you updated.