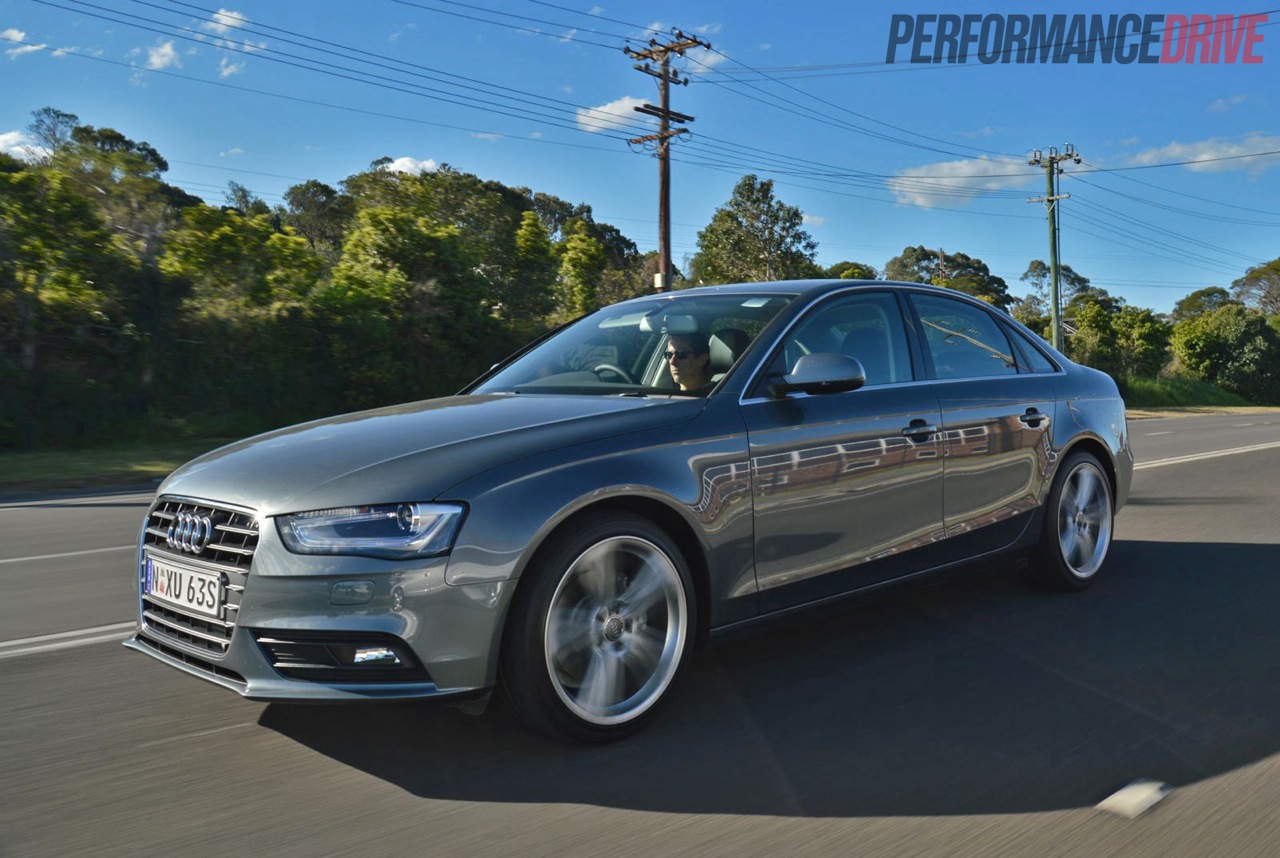 To invigorate the otherwise vanilla entry-level mid-sized premium sedan segment, there’s a going trend for manufacturers to offer a spicy sports pack for their offerings. Audi has been the latest to jump onto the boisterous bandwagon, with the 2013 Audi A4 Sport Edition. 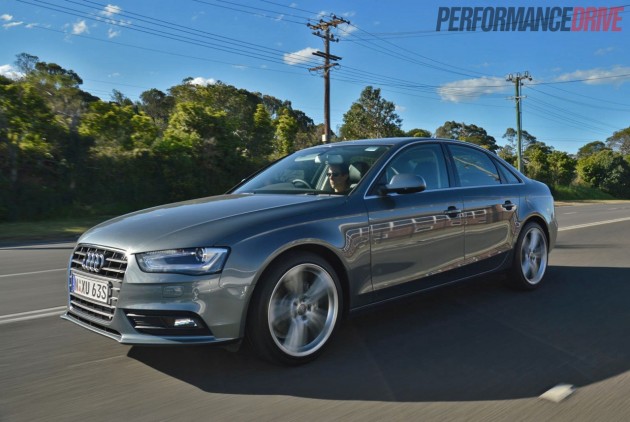 The executive sports sedan segment is a competitive arena at the moment with vehicles such as the BMW 320i Sport Line, the new Lexus IS 250 F Sport, and the Mercedes-Benz C 200 Sport all fighting for a slice of the same cake. The Sport Edition is a 1-of-only-250 limited edition, making it the most exclusive of the lot.

It’s based on the entry-level 1.8 TFSI only it comes with various sporty highlights which aim to enhance styling, in-car technology, and handling, while still maintaining the efficiency and user-friendliness of the base model A4.

Power comes from a 1.8-litre turbocharged four-cylinder producing 125kW and 320Nm. This puts it at the lower end of the output spectrum in regards to its rivals. The engine is matched up to an eight-speed or continuously variable ‘multitronic’ transmission sending power to the front wheels. Outputs are unchanged from the regular non Sport Edition 1.8. (Audi offers the package for the 2.0 TDI turbo-diesel A4 variant as well, with 130kW and 380Nm.)

Despite a range of added features, such as 19-inch alloy wheels, sports suspension, sports seats, a flat-bottom sports steering wheel, the Sport Edition comes into the market from $59,990. It is $1490 more expensive than the regular version, although, it represents $9000 in added value thanks to the extra kit. It also sits in the market as the least expensive proposition of all of the main rivals. 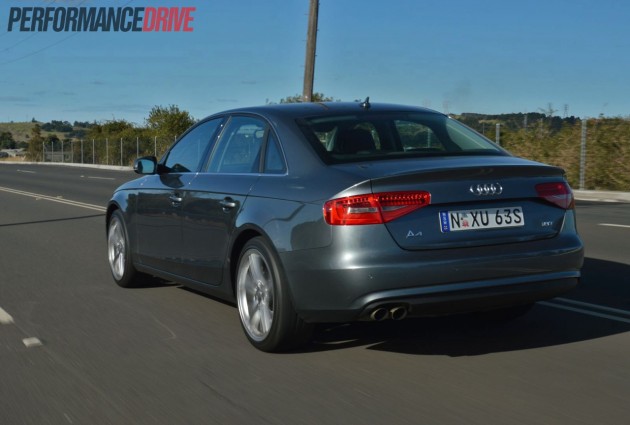 Equipment, comfort, and safety are all at the top the class in the A4. The leather sports seats offer the perfect balance between body holding security and outright relaxation. The driver’s seat is electronically adjustable with lumbar support, and the passenger seat, while it isn’t electric, it is height adjustable for added convenience.

The nestled down seating position for all passengers means the A4 is one of those cars that you sit in rather than on. It makes you feel secure in the car and protected from the outside elements. In that respect, the cabin is a rather warm and cosy place to be. The driver’s position is also spot on.

Up front lies a typically Audi dash layout. That’s not to say it’s a bad thing. Far from it, actually. Everything is clean and clutter-free, and all control functions are of supreme quality with alloy knobs and aluminium trimmings and inlays. Almost all things that are touched, clicked, or turned feel like they are very well built and feel like they will easily stand the test of time.

Usually only available as an option, the Sport Edition comes standard with Audi’s latest ‘MMI’ multimedia interface. It entwines all of the on-board functions and media systems into one unit, including satellite navigation, car settings, and a decent sound system with various playback options including DVD and two SD card slots.

In this segment, the prerequisite is no longer a question of does the car come with a main LCD interface, instead, it’s now about how good is the unit? In the Audi, the graphics are clean and clear and all menus and functions seem second nature during initial use. Quick jump-to menu buttons surrounding the toggle knob are a nice touch as well.

As for cabin space, front and rear passengers are well accommodated. The front seats are large enough to suit most frames and can be slid back for tall people, while the rear space is at the larger end of the segment benchmark in terms of headroom and width.

Legroom is a touch more confined compared with the German rivals, however, the A4 does offer a lot more leg space than the cramped Lexus IS. When it comes time to lug things about, the A4 stands firm with a segment average 480-litre boot.

In terms of user-friendliness and quality, the A4 offers the best interior in its class in our opinion. There are no creaks or rattles, no nasty plastics or materials that appear prone to early wear and tear, and everything you touch has a distinctly Germanic precision about it. The technology is also there to keep up with the forefront of what’s available in this segment at this time. 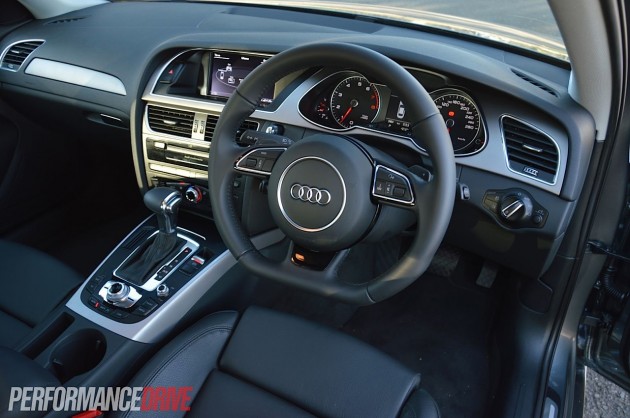 Easily the best part of the drive experience in the A4 Sport Edition is the suspension. It comes with a proper sports setup with uprated springs and dampers and aftermarket-style yellow bushes on various components. Although other media outlets say the suspension is too firm, we don’t think we’ve come across a better setting in this segment.

The ride manages to offer creamy suppleness, absorbing bumps and dips with no jarring or jolts that you get in some of the sporty rivals – even during hard cornering, bumps do little to upset the car’s balance when really pushed – yet when you want to get a bit more animated with the wheel, body roll is kept to a minimum. It’s a super impressive tune.

Like most Audis, the steering is the main letdown to the handling and driving feel. It’s not as responsive as any of the rivals, and, frankly, it feels like it doesn’t actually want to play. At least initially. Instead, the steering feels like it has been set up more for highway use. In other words, it’s a serious business car that doesn’t really have a big sense of humour or enthusiasm when it comes to handling, especially compared with its main rivals.

Turn in is not particularly joyous as the steering sends through some wooly vibes back to the driver, like you’re asking it to do something it doesn’t want to do. Fortunately, the underpinnings are solid and you can feel the top engineering shining through when you start to put it under serious pressure, and push it beyond tame situations.

Attack a few bends with vigour and it will grip well, remaining planted and committed. Feedback through the wheel is not the best, as mentioned, however, it doesn’t stop it from possessing high capabilities from within. It’s one of those vehicles where your trust is built higher the more you drive it.

In this market segment, outright acceleration is never going to give you a new hairdo. We managed a 0-100km/h time of 8.1 seconds in the A4, and, interestingly, the quickest time was achieved in normal auto CVT mode and not by using the ‘sporty’ gear shift paddles, or by engaging S mode (S mode makes it behave like a conventional auto).

With maximum torque coming on strong from just 1400rpm, the low-end pickup is forceful enough to give you a decent little rush through your body when overtaking. It shifts up long steep hills with ease, even with a full load on board.

Puff doesn’t run thin at the top end of the rev range either, with peak power screaming on up until 6200rpm. It does prefer to upchange early though and instead use the torque of the turbo to surge through gears when in S mode. 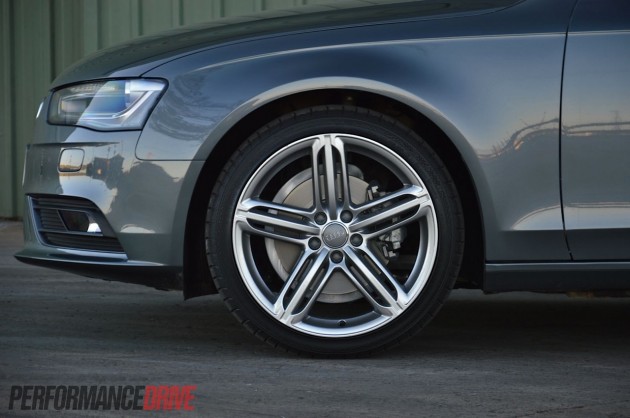 The mid-size premium segment is a competitive one. There are a lot of really great cars available at the moment, and most from the big brands have just undergone major updates, which pushes up the benchmark to a new level.

For the Audi, it sits slightly behind it terms of driver engagement and outright enjoyable handling, contrary to the excellent suspension, but the engine, the interior and exterior design are all at the top of the class. It’s what you want in this type of vehicle; efficiency, premium quality with a hint of brand cachet, and more than advanced enough to keep on top of the game when it comes to technology.

If you love driving, especially more enthusiastic-style driving, testing out the rivals is recommended. If you simply admire the finer things in life you will enjoy the Audi. It’s a quality product, and it feels and looks it in every way.

CONS:
– Steering and handling not as engaging as main rivals
– Hesitant Multitronic CVT transmission, sometimes rolls back on hills 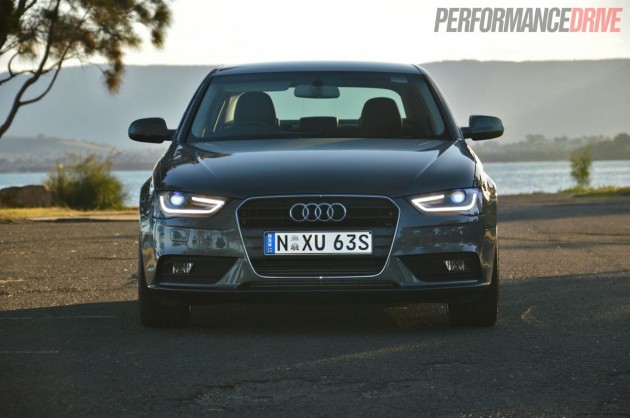 2013 Audi A4 Sport Edition – THE COMPETITORS