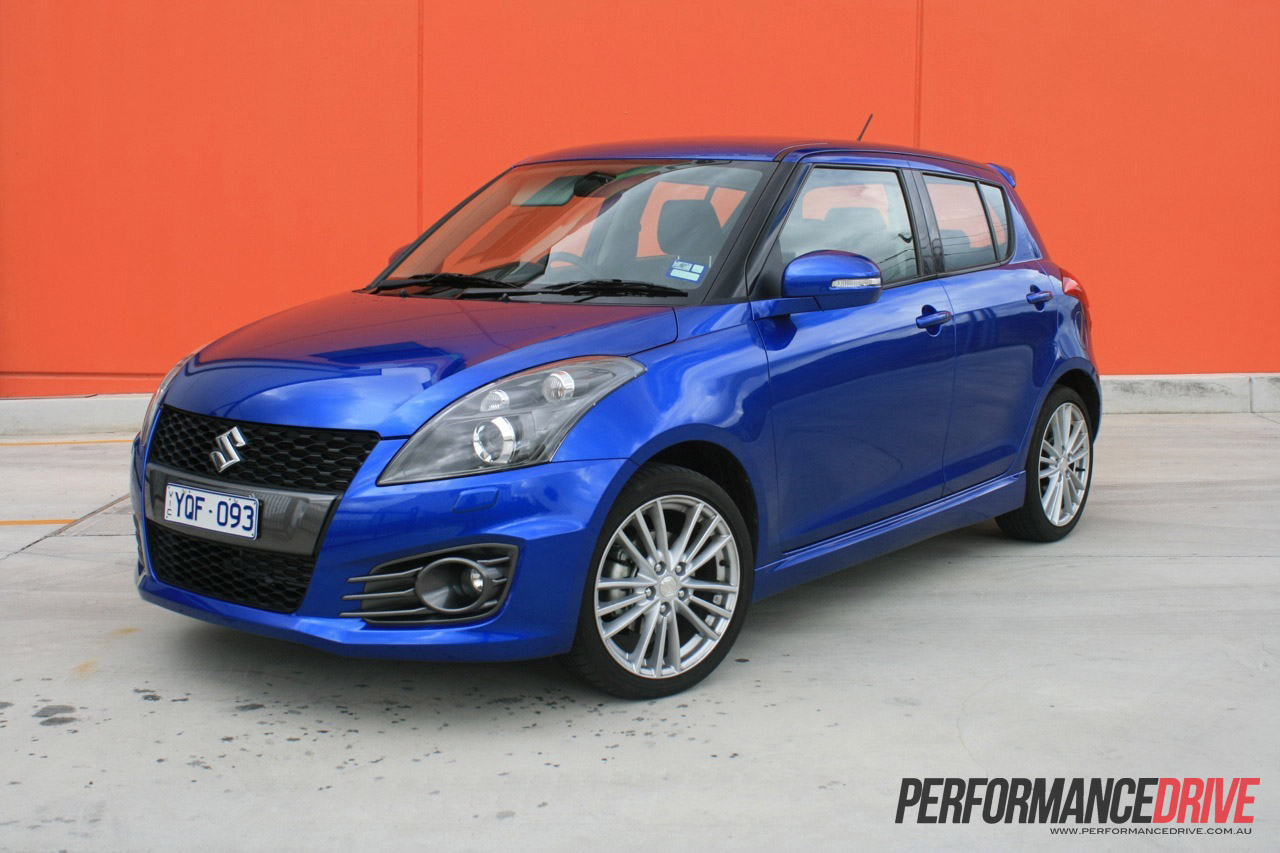 Welcome to the best-value, bang-for-your-buck hot hatch on the market today. It’s the new 2012 Suzuki Swift Sport. And like the predecessor, it offers one of the funnest-handling platforms this side of $25,000. 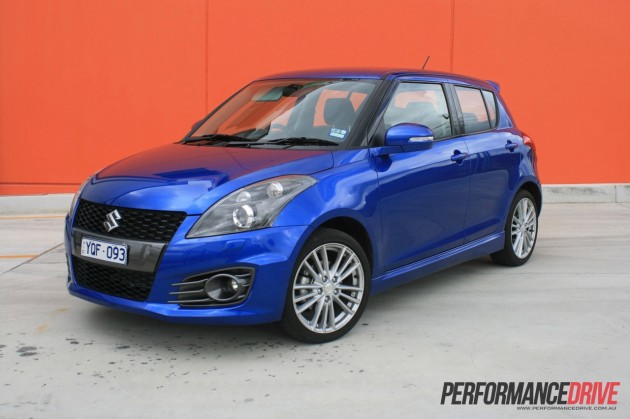 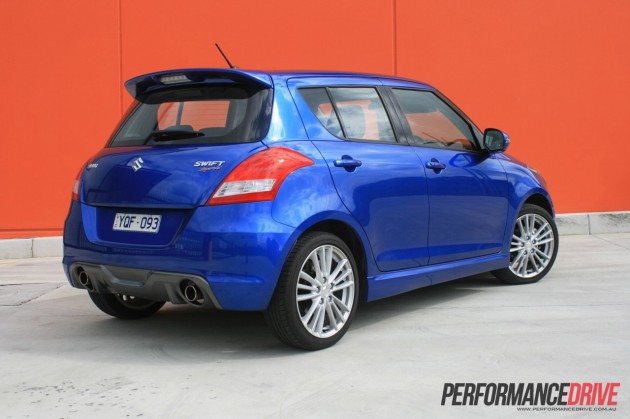 The Swift has been a hot hatch legend since the late-eighties, when Suzuki introduced the GTI. It came with a 1.3-litre four-cylinder engine with double overhead camshafts, and produced 74kW of high-revving power. The GTI’s main trump card was its low weigh; tipping the scales at just 835kg. This is extremely light, especially by today’s standards.

Even so, the 2012 spiritual successor weighs in at 1060kg. With 100kW/160Nm on tap, the power to weight ratio is slightly better than the old GTI: 10.9:1 compared with 11.28:1 of the GTI. The improvement in power-to-weight gives you a sign that Suzuki is sticking to its heritage here, which is certainly a good thing.

The 2012 Suzuki Swift Sport features one of the best hot hatch interiors under $30,000. Like the Suzuki Kizashi, the touch surfaces and plastics used in the Swift are of high quality; there’s soft-touch buttons that feel so good to push, you find yourself pushing them just for fun. The dash and centre fascia is also laid out in a modern and easy-to-understand fashion.

The best thing about the interior is of course those bucket seats. They offer heaps of side support, with leg and rib bolsters. They’re not too hard either, we found them to be quite comfortable even on long journeys. The only problem with them is they could be a bit on the small side for some. 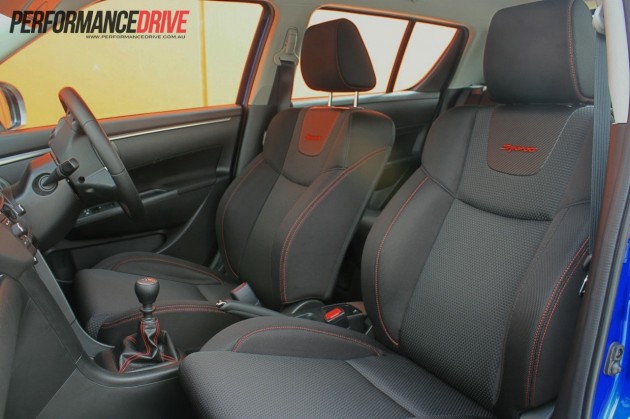 In the back, legroom is limited but still acceptable in regards to this segment. Like the previous model, there is plenty of front and rear headroom to make up for it. The rest seats also follow the theme of the front seats, with highlighted red stitching and somewhat sporty bolsters.

Where the cute proportions of the Swift really become apparent is in the boot; there really is limited space in there. With the rear seats in the normal position, you’ll only get 210 litres worth of goodies in there, but if you’ve got no rear passengers, the 60/40 rear seats will fold down to provide up to 900 litres. 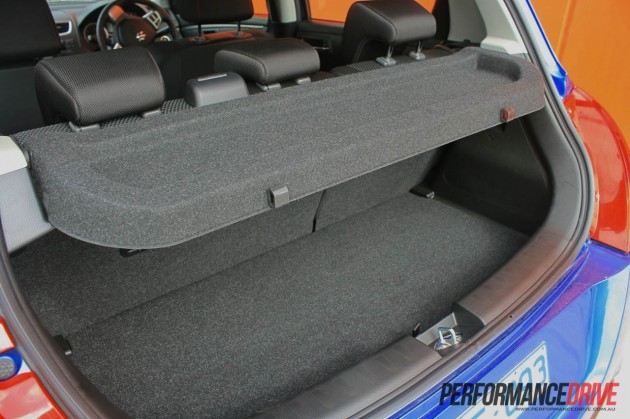 Overall, the interior of the new Sport is a nice place to be. It offers both a sporty character with a low hunkered down driving position (driver’s seat height adjustable), but it’s also warm and comfortable for long drives. 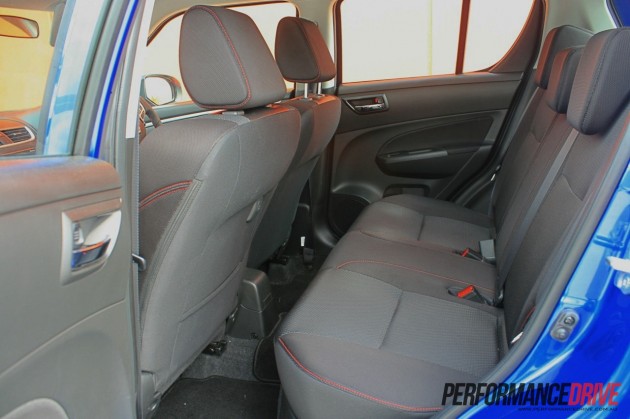 Like the rest of the 2012 Suzuki Swift range, the facelift Sport gets the new sharp headlight design which extends further along the bonnet line than the previous model, as well as similarly styled taillights. At the front there’s an aggressive new front bar with a bit of an Audi theme to it, a slightly hexagonal lower chin, a new black mesh grille, and new foglight clusters with sporty fins stemming sidewards.

For safety, the Sport gets dual front airbags, front knee airbags, side airbags, and curtain airbags, while mechanically, there’s switchable stability and traction control. All these gadgets contribute to the 2012 Swift’s five-star ANCAP safety rating. There’s also three child anchorage points in the back for the young ones. 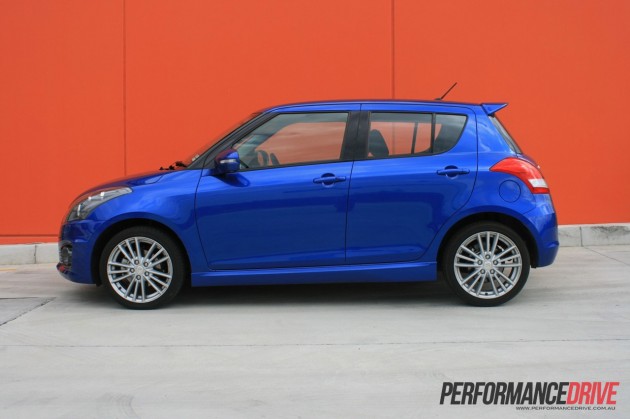 Driving the Swift Sport almost feels like you’re driving a go-kart. The steering wheel sits perfectly in your hands, while the compact wheel placement and dimensions give you a feeling of being directly connected to each wheel – those of you who have driven one of the original Minis will know what we mean by this.

Darting into corners is a lot of fun in the Sport. There’s loads of grip and you get the feeling you can just keep turning in. The steering is great as well, it’s perfectly weighted and offers an engaging experience with the road and the chassis. With plenty of feedback passed on through to your hands, the sports steering wheel is a real pleasure to turn.

Suzuki has firmed up the springs, by 30 per cent at the rear and 15 per cent at the front compared with the previous model, so the ride is a little firmer, but it’s never too firm for country roads or back roads. A word of warning though, there isn’t much travel in the suspension, so it can crash a bit if you encounter a sharp bump or if you’re driving with a full load. 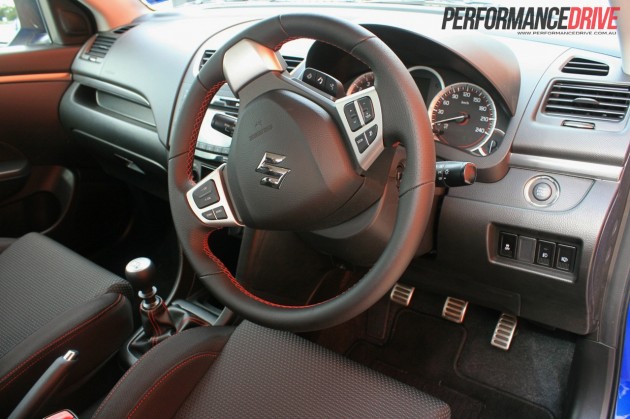 The best way to describe the driving characteristics of the new Sport is by simply using the word ‘fun’. There’s a sense of occasion when driving the Sport that puts a bit of a smile on your face. Sure, the engine note doesn’t crack and burble like some of its turbocharged rivals, but it does give off a mildly angry note when zipping about. The short-throw six-speed also adds to the pleasure and heightens the interactive driving experience.

We took the 2012 Swift Sport to the Marulan Driving Training Centre for some laps to see how it would shape up.

The 2012 Suzuki Swift Sport was a true joy to fling around the circuit. It handles the higher-speed corners very well, staying composed and planted, while the tighter stuff was even better.

We did find there was some squirming under very heavy braking, but this was probably due to the tyres which were slightly worn – potentially having weakened side walls.

During repeated heavy braking though, we were surprised that not once did the brakes fade or did the pedal soften. Again, this is partly thanks to that lightweight nature. 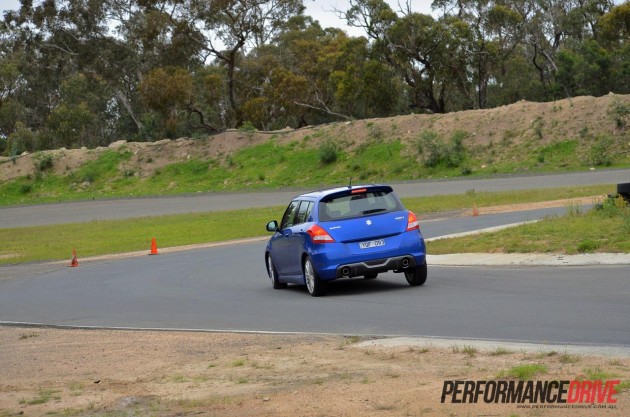 If the Sport lacks anything out on the track, it’s low-down torque and overall grunt. But for a naturally aspirated 1.6-litre, you can’t expect loads of force. Simply using the gears, it is still very quick around the circuit.

Handling-wise, the new suspension on the track works its wonders as on the road. There is a touch of understeer under power, and we feel it could benefit from a limited-slip differential, but initial turn in is very direct. If you point the nose in early with the accelerator lifted, the weight and the tail can be shifted to provide a neat little slide, setting the nose up for corner exit. 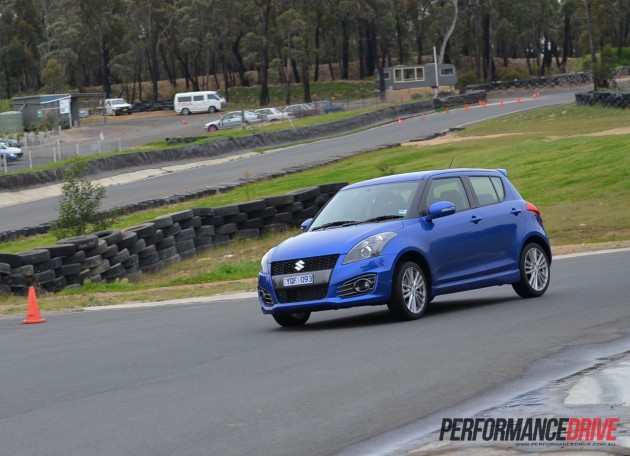 The Swift Sport feels as if it could handle countless laps at the track. And you would definitely enjoy steering it for countless laps.

The 2012 Suzuki Swift Sport is a great car. If you’re in the market for a small hot hatch, the only aspect that will let you down is the boot space, and perhaps the engine note – but only because rivals such as the Mini Cooper S (over $10,000 more expensive), the Volkswagen Polo GTI ($5000 more), and the Fiat 500 Abarth Esseesse ($9000 more), are all turbocharged.

Suzuki is awaiting an international court decision on its recent split from Volkswagen, of which owns 19.9 per cent of Suzuki. But before the bridge is totally burned it would be great if Suzuki could adopt some of that TFSI technology. 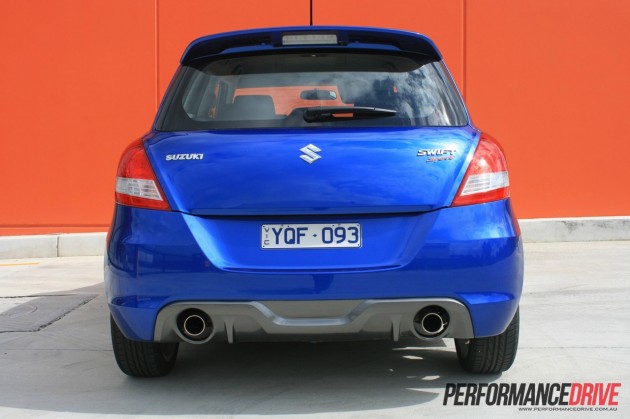 With petrol prices climbing higher and higher, the 2012 Suzuki Swift Sport is the perfect tool for an active driver who is after a cheap and reliable yet very sporty and fun run-around. We managed around 6.4L/100km, and that’s combined with track driving.

As always, take your favourites for a test drive. And be sure to jump in the Swift; it’ll be the surprise of the day.

Welcome to the all-new BMW i4. This is the fully electric version of the 4 Series, in sleek Gran Coupe...