Hennessey Performance has released details of the 2012 Ford Mustang Boss 302 HPE650 tuning pack. And you’d be right in thinking that ‘650’ element of the title has something to do with the amount of horsepower on offer. The Boss HPE650m Mustang also comes with a sprinkling of interior and exterior badges and logos 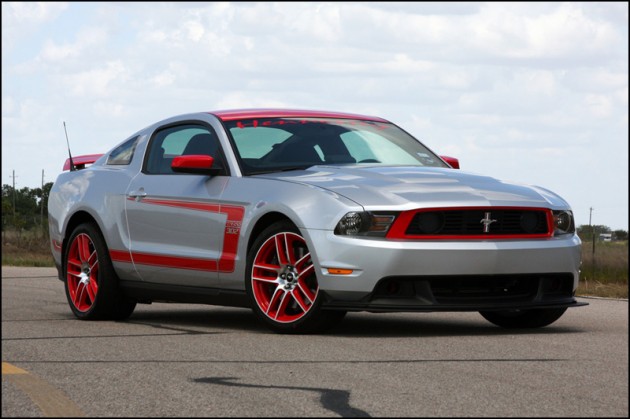 Under the bonnet sits Ford’s new Boss 302 5.0-litre supercharged engine, also found in the Ford FPV GT. It churns out around 315-335kW in standard form. After Hennessey has fettled with it by fitting a TVS2300 supercharger, revised the air intake system, given it larger injectors, retuned the ECU and adapted a large throttle body, the Boss engine now produces 485kW (650hp).

On the outside, the standard Boss 302 comes with racy go-fast stripes, a set of matching alloys, while Hennessey adds a smattering of badges and logo throughout, carbon fibre door sill scuff plates and a special engine plaque.

Hennessey recently released some footage of the HPE650 Mustang completing a run on the dyno. You can check it out by clicking play below. The end result is 420kW (563hp) at the wheels and 643Nm metres, as well as an incredibly angry V8 engine soundtrack. We imagine this thing would break traction easier than an excited dog on slippery tiles.