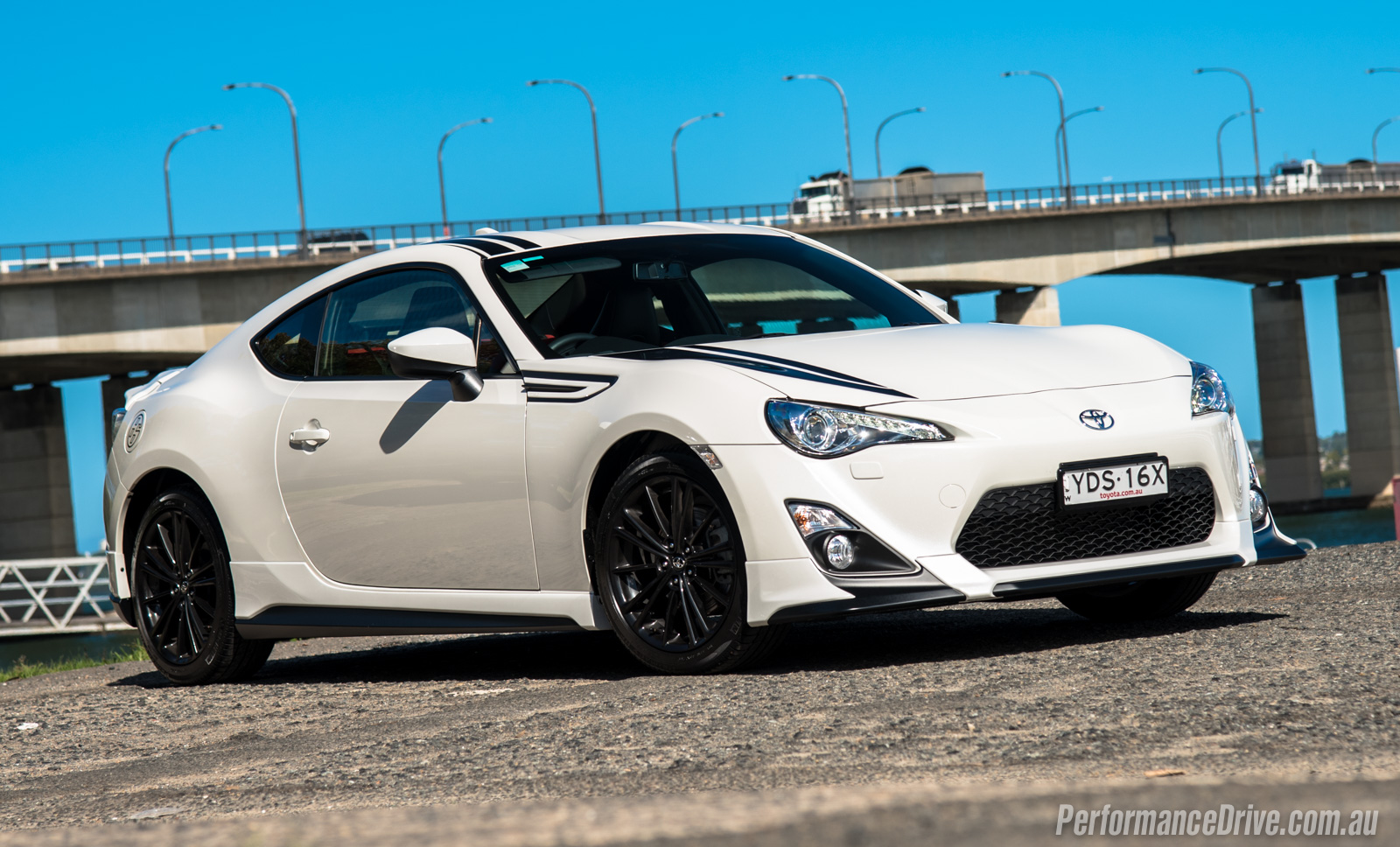 We, like most of the automotive world, welcomed the arrival of the 86 back in 2012 with open arms, beaming with excitement over Toyota/Subaru’s back-to-basics approach to having fun. Since then, it has become Australia’s most popular sports car, with over 15,000 86s sold. 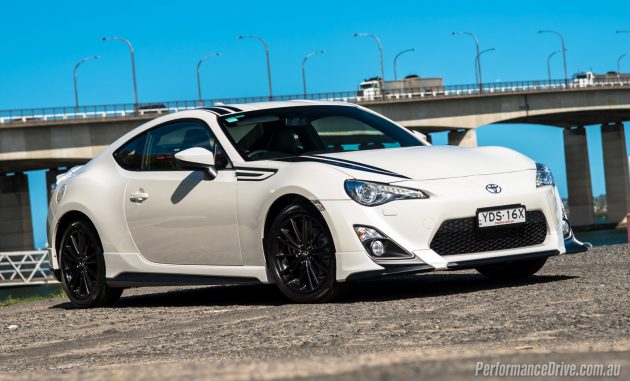 It’s launched to get people excited ahead of the inaugural year of the Toyota 86 Racing Series which kicks off in May. So, a special edition for the enthusiasts? Or a special edition in the name of marketing? Let’s find out. 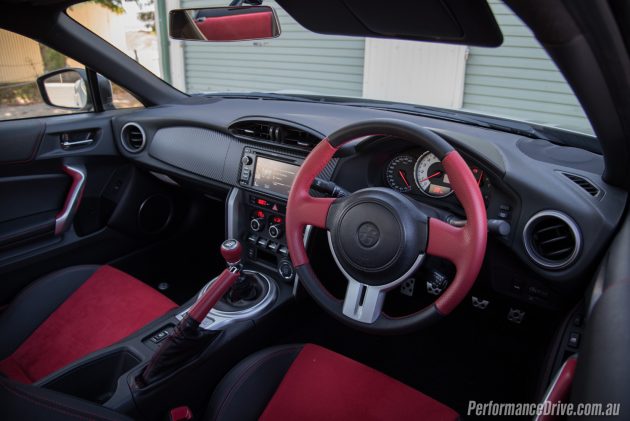 Okay, to answer the burning question in most of your minds, the 86 TRD Blackline edition does not have any mechanical or powertrain upgrades. Rumours of a turbocharged, fire-breathing 86 have been on the grape-vine so long that they’ve been harvested into a lovely little Pinot Noir, but sadly, it’s not here… yet.

Instead, the GTS-based Blackline features a host of aesthetic updates inside and out. The most predominant of which includes a bespoke new bodykit. The kit itself has been designed by TRD (Toyota Racing Development) and features a new front spoiler, side skirts, three-piece rear spoiler, redesigned fenders and bumpers, 17-inch alloy wheels in black, and of course, two black racing stripes.

The aesthetic changes have resulted in a much more aggressive package, especially with the front splitter lowered for aerodynamic benefit, and the racing-inspired tail with TRD emblazoned into plastic. It’s the same 86, but angrier, which in our minds can’t be a bad thing.

Step inside and the once largely black interior has been thrown out in favour of loud and proud red leather/Alcantara seats, with splashes of red thrown around to match. The seats have large side bolsters to hold you in place during high g-forces, and are actually surprisingly comfortable for sport seats. The red accents continue to the steering wheel, door handles, gear knob and handbrake lever. Red stitching is of course obligatory.

The steering wheel remains void of buttons, which is Toyota’s way of reminding you to focus on the drive, not the volume. It’s a minute detail, but a refreshing change and a reflection of the 86’s purposefulness.

Let’s just talk about the display for a minute, because it is, in our opinion, one of the weaker parts of the 86. The DIVX unit looks identical to a cheap aftermarket system, and is frustratingly slow. It’s ironic that Toyota equips cars like the Corolla with a superior MMI, despite a $20k price difference.

Cabin space in the front is not a problem, even providing enough headroom for those of you over the six-foot mark. The 86 is technically a four-seater, however, anyone over the age of six will lose the use of their legs on a lengthy drive. Boot space is rated at 218L and allows the 86 to accommodate some bulkier items. 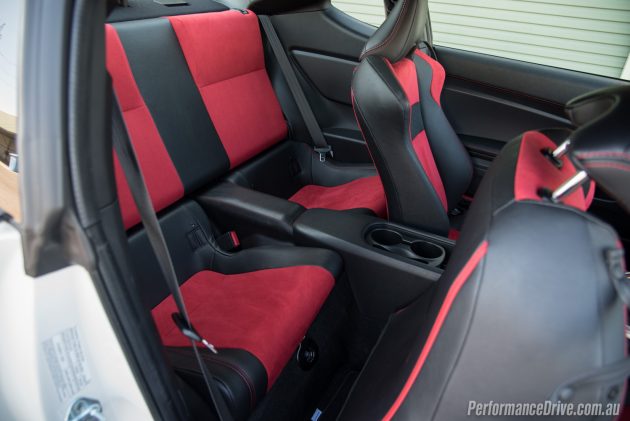 As we’ve already mentioned, the 86 Blackline has received no mechanical trickery from TRD. So what we’re left with is an 86 with a 2.0-litre four-cylinder boxer engine provided by Subaru, with a direct injection system provided by Toyota. The powertrain throws out 147kW at 7000rpm, and 205Nm between 6400-6600rpm.

While the headline facts remain modest, the rear-wheel-drive setup and weight of just over 1200kg ensures the car is an absolute hoot when you get up to speed. Using a V-Box in dry conditions on the track we returned a 0-100km/h sprint in 7.46 seconds. This level of acceleration is just about perfect for a car of this nature. We did notice there is a definite flat spot in the way the power is delivered, with a kind of second kick coming in at around 4000rpm.

Toyota is bringing 200 automatic and 250 manual Blackline units to Australian shores. Thankfully, our press car is equipped with the manual gearbox. The short throw between gears and narrow ratios ensure the driver is kept busy and engaged, keeping the revs high as the boxer engine loves to rev. Engine sound is a polarising aspect of the 86, but will have any Subaru fan cheerful thanks to that characteristic burble.

6.0-litre V8s with twin-turbo systems are all well and good, but if you want to have this much fun for under $40k, you’ll be hard-pressed to find anything other than the 86’s key rival, the Mazda MX-5. We recently pitted these two head-to-head on the track, so we’ll leave the juicy stuff for that comparison. 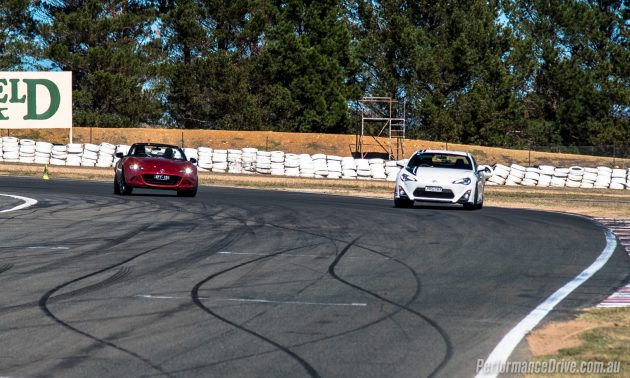 What we can tell you is the back-to-basics recipe that Toyota/Subaru employed has paid dividends when it comes to having fun at safe speeds. It rides on narrow 17-inch 215/45 rubber, which can be both playful and engaging on the limit, with no rude surprises.

The 86 is remarkably good for both setting a hot lap and oversteering and hooning around a track. In reality some cars are good at one or the other. It is very easy to hold a controlled drift, using some momentum and then throttle, or you can concentrate more and focus on a precision lap, making fine adjustments to the steering as you go around.

While the 86 can be a lunatic on the track, it can also be used as a civilized A-t0-B commuter; after all, it’s a Toyota. However, there are some sacrifices to be aware of. The ride is firm, not supercar-like, but a car like this favours lap times over arriving to a destination with your lower vertebrae intact.

Also, the boxer engine is a little thirstier than some of its rivals, but remains somewhat economical with an ADR consumption rate of 7.8L/100km on the combined cycle. Around the city you’ll see a figure in the low double digits, which is high for a four-cylinder, but you can get near the official rate on the highways. 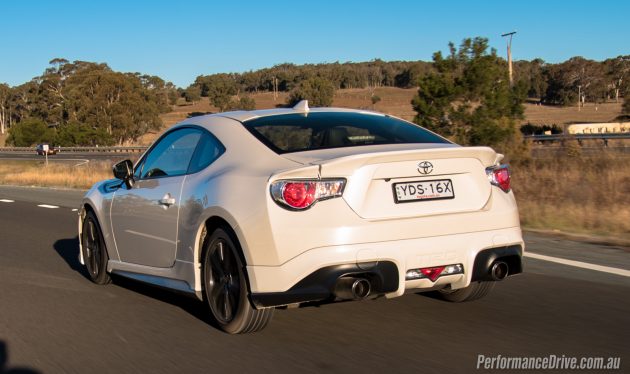 The 86 is a vehicle that devotees are extremely passionate about. In that respect, there are a number of people that will appreciate the limited-edition run of the TRD Blackline, and love every minute of owning it.

However, some of the cynics out there will walk straight past the new interior and bold styling of the Blackline and opt for a stock standard 86. Both of these are excellent driver’s cars in every respect. And when you’re paying just $2000 extra for the TRD kit, it does seem like a bargain and could help with resale. Stay tuned for our track test comparison with the MX-5 2L for more details.