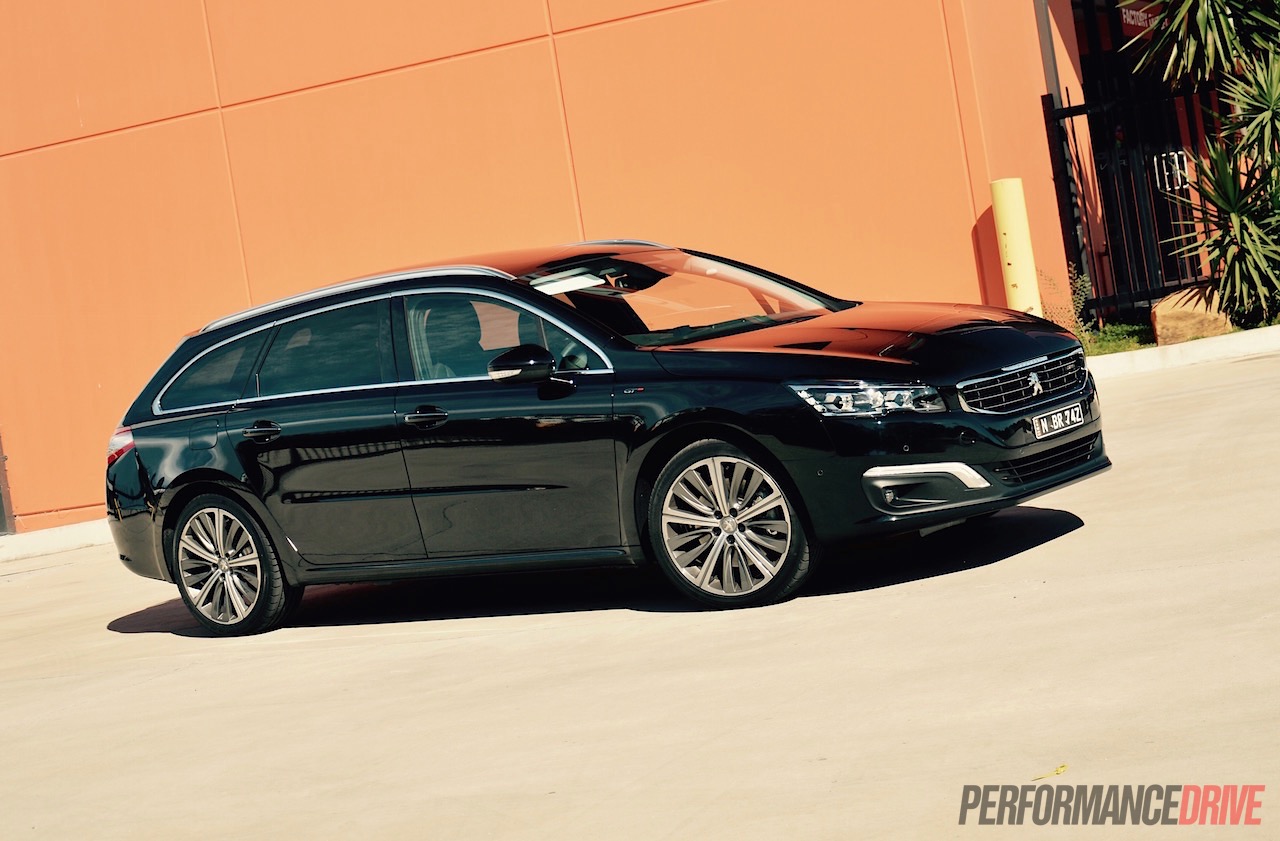 French cars. They’ve always been interesting, with classy and innovative designs, and often filled with smart technologies. However, they don’t have the best reputation for reliability, and resale for some is not ideal. The 2015 Peugeot 508 GT Touring looks so good though, as far as sleek Euro wagons go. Should you take a potential plunge and buy one? 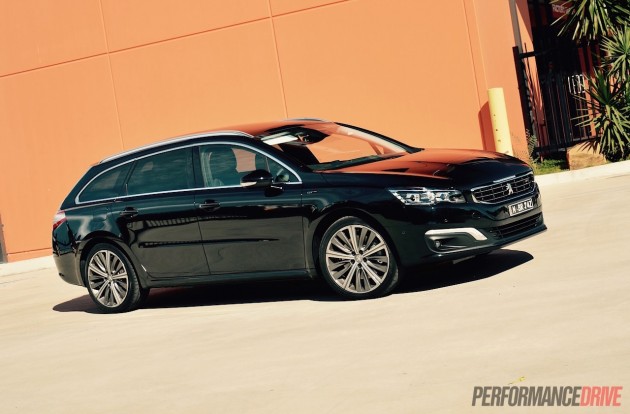 Firstly, let’s try and address the reliability perception. Peugeot is part of PSA Peugeot Citroen, a company listed on the Euronext Paris stock exchange, and the second-largest auto manufacturer in Europe (2012). In Australia, all new Peugeot vehicles come with a three-year roadside assistance package and a three-year/100,000km warranty.

The local arm has issued just four recalls for its vehicles since 2013. Compared with Jeep, a company that sells fewer model lines than Peugeot (five versus eight), issued 23 recalls in the same period. Recalls are obviously not a defining factor for reliability, but they can be taken as an indication. 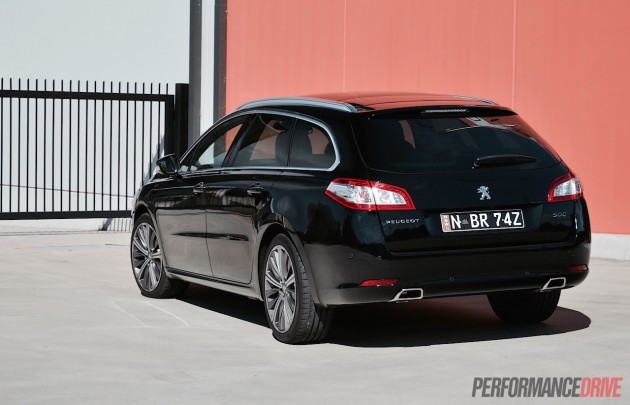 Peugeots have definitely improved over the years in terms of refinement and efficiency. And the 508 GT certainly shows evidence of that. During our week-long test, we didn’t need to visit the petrol station once, it was that good on fuel. But more on the driving part later.

The 508 underwent a facelift earlier this year. It comes in five variant levels, with three different engine packages. There’s a 1.6-litre turbo-petrol producing 121kW and 240Nm, a 2.0-litre turbo-diesel developing 120kW and 340Nm, and the range-topping 2.2-litre HDi turbo-diesel as we have here, producing 150kW and 450Nm. The latter engine is exclusively available in top GT guise (sedan and wagon). Prices span from $37,990 for the 508 and go up to $61,490 for this top GT Touring wagon version (excluding on-road costs).

If you’re thinking about buying a French car because you want exceptional comfort, the 508 GT brings it in spades. The cabin is filled with classy details, such as piano black trimmings around the dash and console, while the big and supportive seats are wrapped in quality leather and stitched together with sporty red thread. Everything is electric, as you would expect, from the front seat adjustment, to the head-up display screen, to the tailgate opening and closing.

We wouldn’t call it the largest of sedans (or wagons), but it is one of the biggest in the class. The cabin is easily capacious enough to swallow a full family and their belongings. Legroom is plentiful in the front and just as welcoming in the back, while headroom will suffice for most passengers in both areas. As a bonus, the 508 cabin environment has a distinct open and airy feel to it, with a low centre console and forward dash allowing for an uncluttered experience. In the very back the Touring version offers 612 litres of cargo space, expandable to 1817 litres with the rear seats folded down.

Standard luxuries include a comprehensive 7.0-inch touch-screen interface with full connectivity and in-built apps, an 8GB hard drive, satellite navigation, a massage seat for the driver, heated front seats, four-zone climate control with separate temp adjustment in the back, and a massive glass roof with a power-operated blind to provide protection from the midday sun. All buttons and switchgear have a nice and solid feel, while the sectioned layout on the dash is easy to understand. We’re not a fan of the ’90s-style flip-out console for the head-up display controls, but it does help to reduce clutter and remove the sheer amount of buttons presented to the driver (see photo gallery). 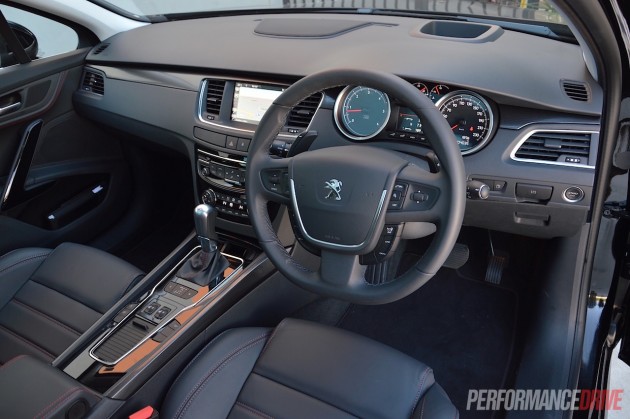 So far the 508 GT Touring is quite an attractive proposition, and not just figuratively speaking; it’s also pleasing on the eye. Peugeot exterior designs have really moved forward in recent times, with the latest 308 and this 508 standing out as some of the most attractive models in their class. The 508 GT gets chrome detailing around the front end and a new grille, LED headlights, prestigious multispoke 19-inch alloy wheels, and revised front and rear bumper bars compared with the pre-facelifted model. In a dark colour like this test car, it looks elegant and stylish, especially when you park it next to the mainstream rivals.

Lastly, you need to know about how it drives and how it feels on the road. In dense traffic conditions, the 508 GT is an ideally pleasant cruiser to settle your frustration. The engine is quiet and the low-down torque – max 450Nm available from 2000rpm – makes it smooth and relaxing. It’s effortless too, needing only a gentle prod of the accelerator to get things moving.

To our surprise, it also really moves when you put your foot down. Although 150kW might not seem like much, the 450Nm pushes the 508 with potentially gut-wrenching force (depending on what you’re used to). We timed 0-100km/h in 8.5 seconds, which isn’t really anything to write home about, but its initial acceleration and mid-range punch is what tends to excite your emotions.

Around the bends the 508’s steering is not the nicest or sharpest in the segment. Feedback is mediocre at a slow to mid-level pace, with more and more feel coming through the harder you push it. The chassis and suspension, on the other hand, handle really well. The setup soaks up mid-corner bumps with confident composure, and without disrupting the intended direction. There’s heaps of grip from the Michelin tyres too. With a combination like this, you can really pull some g-forces around the corners if you want to. 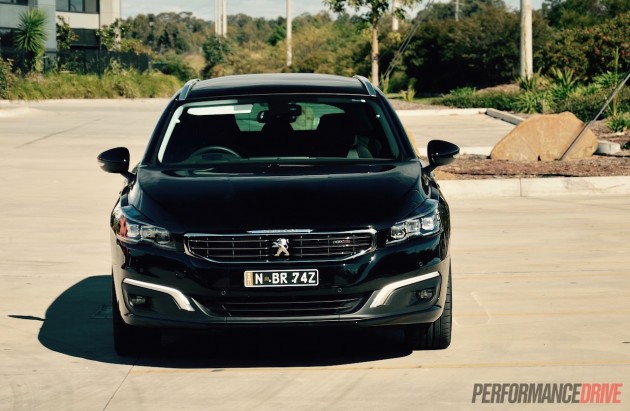 Agility is not super high, but it is surprisingly nimble in faster sweepers and switchbacks. The suspension is more inclined to comfort as opposed to sportiness, which probably takes away some of its tighter-corner know-how. Even still, with a heavy diesel engine up front and an overall kerb weight of 1676kg, this Frenchy is impressively capable in terms of point-to-point performance.

So, back to the original question then. There is no doubt the 508 GT Touring is a practical and comfortable mid-size option. With an official average consumption rate of just 5.5L/100km and a tested average of 7.0L/100km, it is definitely an economical option to consider as well.

We like the exterior styling and the comprehensible interior layout, and of course the low-end torque of the diesel motor. The segment alone is probably the most concerning factor. At a smidge over $60k, it takes on the best of the Japanese mid-sizers, the best Volkswagen Passat, and it even snaps at the heels of some of the higher grade German rivals. If you want something a little different, and comfort and torque are important to you, then yes, you should consider buying this car. Take one for a test drive and see what you think.