Honda has announced it will be competing in the 2012 Bosch Australian Rally Championship with two Mugen Honda Jazz ARC rally cars. The souped-up Jazz’s will be designed to meet G2 specifications. 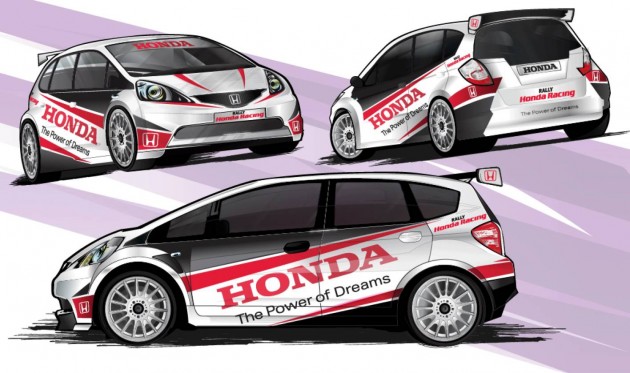 Boasting a highly tuned Mugen 2.0-litre four-cylinder naturally aspirated engine, the Mugen Honda Jazz ARC rally cars will muscle through the stages with 183kW of power and 193Nm of torque. Power is achieved at an ear-bursting 9000rpm.

Eli Evans and Glen Weston will drive one of the Mugen Honda Jazz ARC rally cars, while a second team will be announced early in 2012.

So far, only these renderings have been released showing what the cars will look like, but according to Scott Pedder, CEO of the Bosch ARC, the cars will look even better than the current Civic Type R rally cars used in the ARC. He said,

“The Honda Civic Type R that Eli Evans and Glen Weston campaigned over the past two years has become a crowd favourite at rallies around the country, because of how exciting it looks on the stages and the great sound it makes. These new cars are going to look even better.

“The renderings of the new Honda Jazz G2 are very exciting and give a strong indication of how the new generation of two-wheel drive rally cars will look. I am sure they will fire the imagination of rally enthusiasts.”

The 2012 Bosch Australian Rally Championship will kick off at Calder Park in Victoria in March.