As a bit of a surprise Ferrari has unveiled the new Ferrari 458 Speciale. It’s the hardcore, stripped out successor to the 430 Scuderia, offering more power, less weight, and all-new cutting-edge technologies. 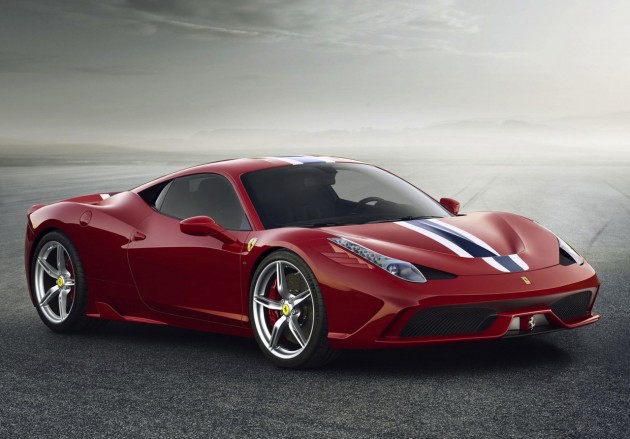 Previously rumoured as the ‘Monte Carlo’, the 458 Speciale is the epitome of the 458 model, and perhaps the epitome in driver’s cars that the company currently offers. It’s perfectly suited to regular track work, put it that way.

Ferrari has managed to strip around 200kg from the 458 for the Speciale, leaving a total weight of just 1290kg. This is thanks to various carbon fibre features and interior weight reduction measures. Much of the body and styling has also been aerodynamically honed for optimum downforce.

Out on the road, the tech details translate into super-quick acceleration. From 0-100km/h, it takes just 3.0 seconds, while 0-200km/h takes just 9.1 seconds. In other words, it’s one of the quickest production V8 Ferrari vehicles ever made.

For the first time, Ferrari has developed a special corner control mode using the traction control and electronic differential. It’s called Side Slip Angle Control and essentially what it does is continuously analyse the car’s side slip, and maintain the best balance and grip for ultimate track performance. Ferrari explains,

“Thanks to the development of an accurate new algorithm SSC performs instant-to-instant analysis of the car’s side slip, comparing it with the target value and then optimising both torque management (via integration with F1- Trac traction control) and torque distribution between the two wheels (via integration with the E-Diff electronic differential).”

Ferrari is very proud of the technology breakthrough and says the 458 Speciale offers consistent laps times, unprecedented for a car that is not solely designed as a racing car. In fact, Ferrari says the Speciale is able to achieve the highest lateral acceleration of any Ferrari ever made, reaching 1.33g.

The new model will make its official debut at the 2013 Frankfurt Motor Show, starting September 10. Possible Australian market details and pricing are yet to be announced.

See below for more specifications: