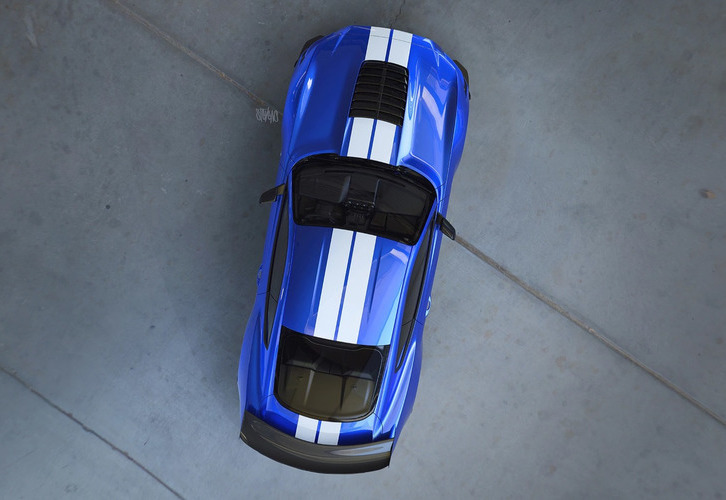 The much-anticipated arrival of the 2019 Ford Shelby Mustang GT500 is getting near, as the company releases the most revealing teaser yet. It clearly shows the body from a top view.

Starting with the most obvious elements confirmed in the photo, the new GT500 will come with a unique bonnet with race-like heat-extraction vents, as well as a bulging centre section. Down at the back you can also see a large wing made from what looks to be carbon fibre.

Other interesting highlights include faint confirmation of an aggressive front splitter (you can just see the corner of it in the upper right), as well as black side mirrors and neatly bolstered wheel arches. Of course, a pair of racing stripes run over the length of the body in GT500 tradition.

What everyone wants to know is what will the engine entail. Unfortunately Ford is keeping those cards close to its chest. However, there are a number of rumours around that suggest the new GT500 will feature a forced induction version of its 5.2-litre ‘Voodoo’ V8 which uses a flat-plane crank.

Ford has already confirmed that power will exceed 700hp (522kW), but by how much is yet to be known. It’s also unclear on whether it will use a twin turbocharger system or a (more likely) supercharger setup. Either way, the engine is set to be hooked up to an automatic transmission of some description, at least as an option over a manual.

An earlier spy video showed a prototype cruising the streets of Detroit producing an obvious quick-changing automatic tone. Some believe it might even be a dual-clutch auto, although the company did recently introduce a 10-speed auto which could be beefed up for the GT500,

Ford is obviously ready to show the finished product, judging by this revealing teaser, so we’d anticipate a debut some time very soon.