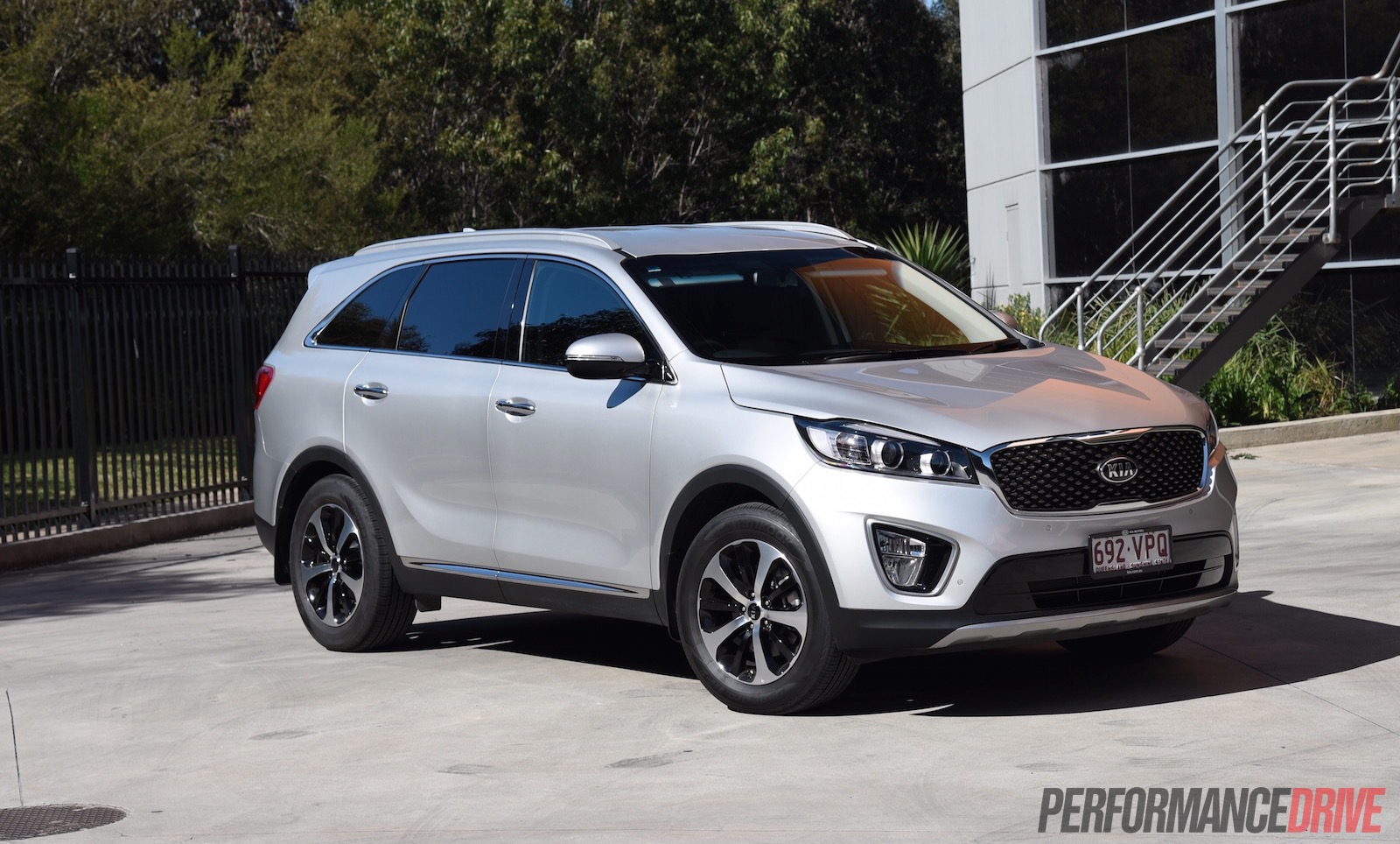 It wasn’t long ago when good, reasonably-priced seven-seat SUVs were hard to come by. Now, there are a bunch to choose from. Kia’s latest attempt, the 2015 Sorento, could very well be the best value out of them all. 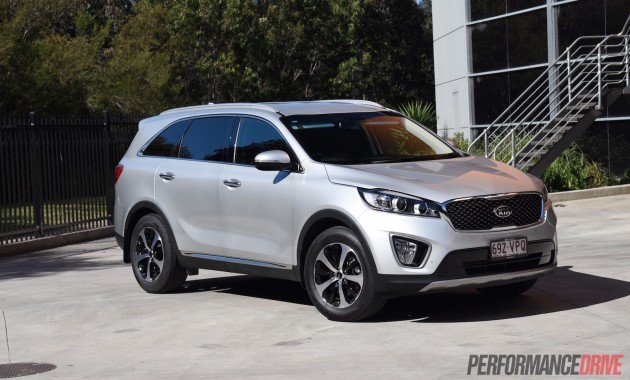 Kia introduced the new, third-gen model locally in June. It continues to be the company’s largest SUV offered in Australia, and the latest edition has received a massive overhaul to improve chassis dynamics and to lower noise and vibration levels. It also comes with various advancements in safety technology, a higher quality interior, and a revised exterior design for a more modern and crisp look.

Local buyers continue to be offered two engine options, including an updated 2.2-litre turbo-diesel four-cylinder producing 147kW and 441Nm, and a 3.3-litre naturally aspirated V6 petrol developing 199kW and 318Nm. Diesel variants use an on-demand all-wheel drive system, while the petrol sticks with front-wheel drive. All use a six-speed auto.

There are three variant levels in the diesel (SL, SLi, Platinum), while the petrol comes in two trims (SL, SLi). Here we’re testing the flagship petrol SLi, which starts at $45,990. 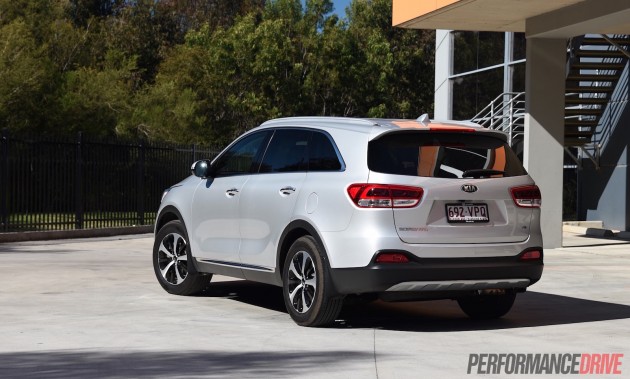 You can forget what you might think about Kia interiors of the past. The new Sorento cabin is a proper luxury setting. The smart tones and selection of textures used makes it one of the most refined in the class in our opinion, and certainly in this price bracket.

Kia says it worked hard on updating the interior so that it is more sophisticated and more luxurious than the previous model, with an increase in soft-touch surfaces and higher quality materials spread throughout. And you can see it and appreciate it. The dash is pleasant and stylish, without going over the top, and the seats are very soft and comfortable. All materials feel good and seem solid for longevity too.

In terms of space, you aren’t likely to need more of it in the Sorento. This thing is huge. Headroom and legroom in the first two rows is abundant, while only the third row suffers poor legroom like most third row seats. Compared with its key market rivals – the Fiat Freemont and Toyota Kluger – the third row is about average and best suited to children only.

Going for the SLi variant gets you various modern conveniences to keep everyone on board happy, such as a power adjustable driver’s seat, a 7.0-inch TFT touch-screen interface with multimedia connectivity, and a nice-sounding 10-speaker stereo system (including a sub-woofer). Satellite navigation is also standard on all models, with two USB ports (front and rear) and three 12-volt sockets to keep everyone’s gadgets fully charged. 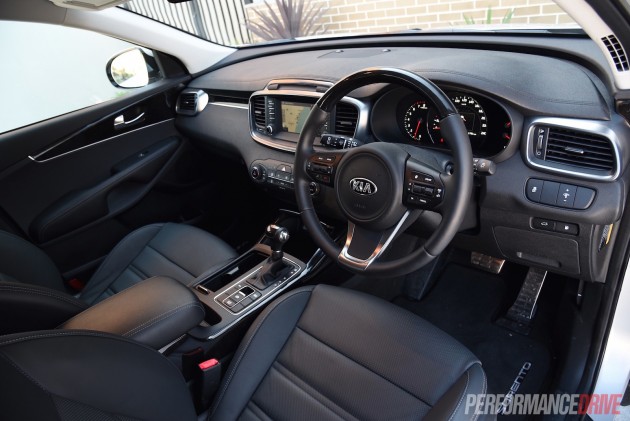 Every row gets two cup holders each, and there are big bottle holders in all of the doors. Dual-zone climate control is standard and comes with a clean air module, and fan speed control for the third row. The climate control unit is conveniently located on its own separate panel on the dash fascia, which means you don’t have to go looking for it within the touch-screen system like in some rivals.

Cargo space is just like the cabin; huge. Kia quotes capacities of 1662 litres with all rear seats folded down, 605 litres with just the third row down, and 142 litres with all seven seats up (VDA test). Compared with the Fiat Freemont (1500L/784L) and Toyota Kluger (1171L/529L), the Kia shapes up pretty good. Even the centre console box and front cup holder area is quite large.

Every Sorento comes with an extensive suite of safety features, including stability and traction control, front and rear parking sensors, a rear-view camera, auto headlights with cornering lamps, three top-tier and two ISOFIX child seat points, six airbags, and an alarm. As such, ANCAP has awarded five stars for safety, with an overall high score of 36.62 out of 37. 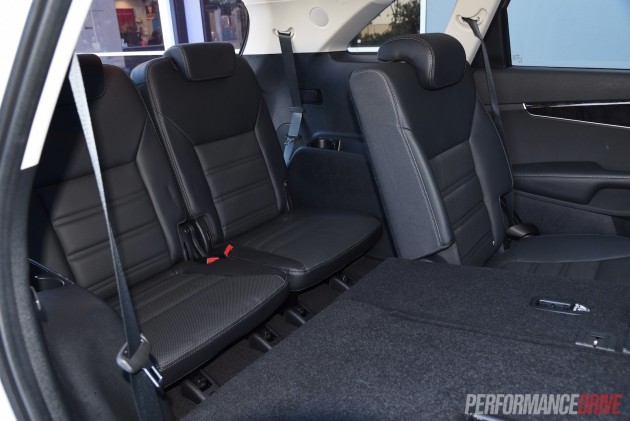 Those who like a perched up driving position will enjoy the Sorento. You sit up high for a commanding view of the traffic around you. In saying that, it’s not overly tall or awkward in any way. High window sills provide you with a sit-in rather than sit-on layout.

If you’re thinking of going for the V6 because it is more powerful than the diesel, we think you should at least consider the diesel option as it does provide more torque and more usable power. With the V6 you do need to give it a decent rev to get the most out of it and reach that 199kW output. When you do, the performance is reasonable rather than remarkable. We timed 0-100km/h in 8.5 seconds.

The V6 could do with more low-end torque we think. The peak figure of 318Nm (low in itself) is not available until 5300rpm. That’s high. It is surprisingly smooth and svelte though. And extremely quiet. As a luxury option the V6 is the more fitting unit to go for – we are genuinely impressed with how comfortable and relaxing the drive is.

Part of the comfortableness is down to the supple ride. The suspension has no trouble absorbing the contours of a busy road. Surprisingly, this doesn’t translate to mattress-on-wheels handling and body control. Body roll is withheld under gradual directional changes, and turn-in is enthusiastic and responsive, with a good turning circle making inner-city roundabouts a breeze. Tighter corners in the mountains and quick switchbacks do load up the steering, and the body does start to wobble around, as expected on a comfort-focused large SUV. Torque steer is also present if you give it the full beans in certain conditions.

Perhaps the main gripe we have with the powertrain and drive character is the fuel economy. We averaged high 12s during our week, and the official average is 9.9L/100km. The diesel offers 7.8L/100km for the official combined cycle, and that includes a more reassuring all-wheel drive system over this front-drive setup.

As a day-to-day family vehicle, the Sorento truly is an excellent proposition to consider. We love the high level of refinement and forward visibility, and the sheer quietness is indeed impressive for a sub-$50k seven-seat SUV. 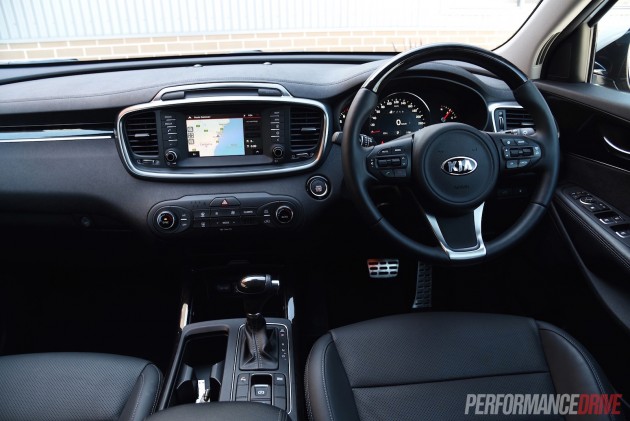 If you’re in the market for a seven-seat SUV, the Sorento SLi deserves a proper look. It doesn’t trail the class in any area, and in fact leads it in some in our opinion, such as with refinement and interior quality. We strongly suggest you check out the diesel version though. It offers almost as much power, a lot more torque, and you’ll be spending considerably less at the petrol station.