A spanking new 2014 Chevrolet Corvette Stringray has been involved in a crash already, even though the new model isn’t scheduled to hit showrooms until later this year. It’s believed the car is a pre-production test car. 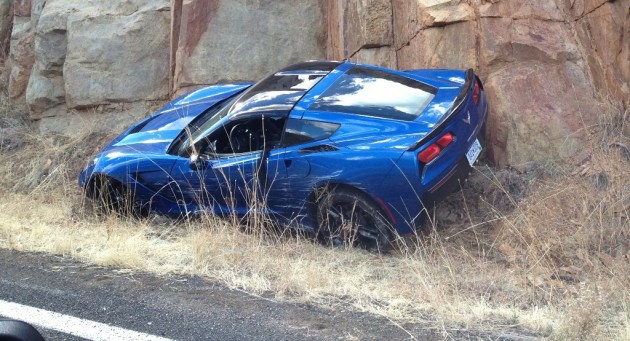 Details on the car and who was driving it are a little hazy at this stage. As far as we know, and judging by the fact the car hasn’t technically launched onto the market yet, the crashed 2014 Chevrolet Corvette is owned by GM. It’s possible the company is still doing testing on the car in real world conditions and making some final revisions.

As for the crash, it doesn’t look too bad, however, according to reports, the other side of the 2014 Stingray took the brunt of the impact. It’s understood the ‘Vette hit a guardrail on the left, then bounced back and into the jagged rocks.

Scratches on the left are quite visible, while the front left wheel also appears to be in bad shape. As for the other side, we can only imagine, but we’re sure it doesn’t look pretty. Fortunately, it looks like the occupants would have walked away from this one.

We’ll keep this story updated with any official details that we come across in regards to who was driving and who owns the car.