Jamie Whincup was again the man at the top of the timesheets at the Supercheap Auto Bathurst 1000, this time in qualifying after yesterday’s practice. 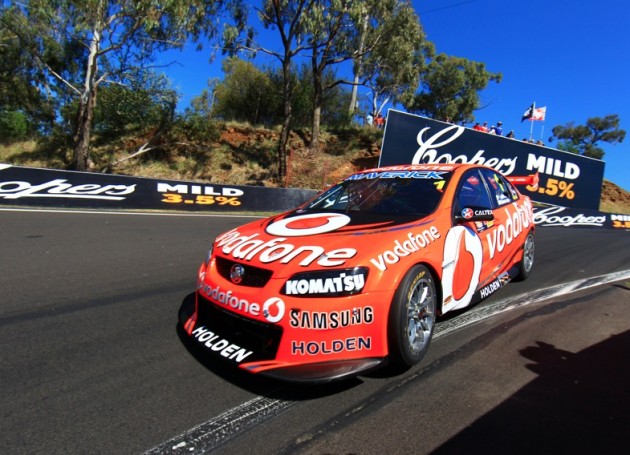 While the TeamVodafone driver blitzed the field to take provisional pole, reigning Bathurst champion Garth Tander had to get a spot in tomorrow’s top 10 shootout the hard way.

The Holden Racing Team driver locked a brake entering turn two early in the session, but after limping it back to his pit crew and about the Mt Panorama circuit’s length in race tape, Tander lapped his smashed up Commodore in 2:08.1045. This put him in eighth and gives him a shot at pole position tommorow.

Tander praised his team for making the quick repairs.

“I had a lock-up going into turn two. We had new rotors on the front and they grabbed the front tyre and wouldn’t unlock,” Tander said.

“I was a passenger into the wall. I dug myself out. The boys did a fantastic job to get it back into shape and pumped out two 2:08.1s. To end up eighth and not too far from off the fastest time I was pleasantly surprised to be honest with you.”

Ford Performance Racing has been on the pace at every circuit in 2012 and it was no different on the mountain. Mark Winterbottom and Will Davison finished third and fourth fastest respectively while David Reynolds in the Bottle-O Ford snuck into the shootout in 10th.

The top 10 shootout is scheduled for 4:30pm Saturday local time.