Smacking the world of supercars in the face, Novitec Rosso has revealed its new F12 N-LARGO package which is capable of blowing most exotics out of the water in terms of power and jaw-dropping presence. 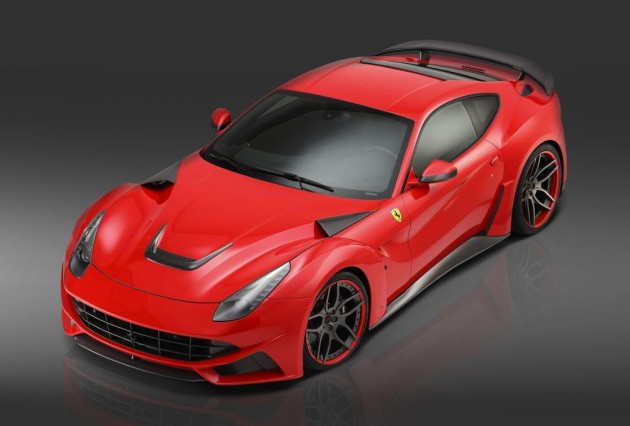 Based on the already lethal Ferrari F12 grand touring coupe, the N-LARGO package is all about speed and looking good doing it. It features a complete bodykit with puffed out wheel arches, lots of carbon fibre, and new front and rear bumper bars and spoilers. There’s also a chunky new diffuser at the back for added aero and aggression.

New side skirts are added, made from carbon fibre of course, while a set of 21-inch front and whopping 22-inch rear forged alloy wheels complete the profile. The wheels are dark grey to match the carbon items and feature a red inner rim. 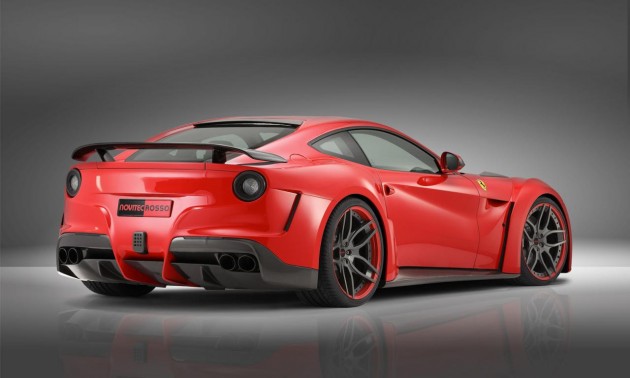 So what’s under the bonnet? When Ferrari launched the F12 last year it was the most powerful Ferrari road car ever, with its 6.3-litre V12 good for 545kW and 690Nm. With the help of an ECU program and a sports exhaust system, the V12 now belches out 574kW and 722Nm. This equates to a top speed of around 350km/h.

To make sure the almighty coupe corners as well as it goes Novitec has fitted a set of sports lowered springs which drop the car by 40mm. A nose-lift system is incorporated in which can raise the car by 40mm for entering driveways and the like.

It looks like a glorified bullet, and it goes like one too. Only problem is, the Ferrari F12 retails for $691,000 in Australia and prices for the N-LARGO kit haven’t been mentioned. Hmm, a new mortgage?